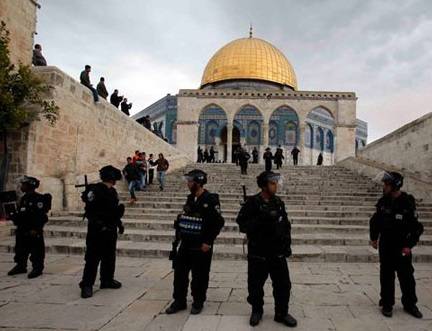 “As many as 244 settlers swarmed into the site via the Al-Maghariba Gate, which has remained under strict Israeli control since the city’s occupation in 1967,” read a statement issued by the Jordan-run agency responsible for the upkeep of East Jerusalem’s Muslim and Christian holy sites.

According to the statement, settlers -- accompanied by Israeli police and Special Forces -- performed silent prayers and Talmudic rituals along the eastern side of the Al-Aqsa compound.

Meanwhile, police reportedly prevented Firas al-Dibs, a Palestinian representative of the agency, from entering the site.

“Police told me that I’m banned from the area until further notice,” al-Dibs said in a press statement, going on to assert that Israeli authorities wanted to stop him from documenting frequent setter incursions into the mosque complex.

For Muslims, Al-Aqsa represents the world’s third holiest site after Mecca and Medina. Jews, for their part, claim the area was the site of two prominent Jewish temples in ancient times.

Jerusalem has remained in the media spotlight since last December, when U.S. President Donald Trump recognized the city as Israel's capital, drawing widespread condemnation from across the Arab and Muslim world.

Israel occupied East Jerusalem, in which the Al-Aqsa is located, during the 1967 Arab-Israeli War. In a move never recognized by the international community, Israel annexed the entire city in 1980, claiming it as its “eternal and undivided” capital.