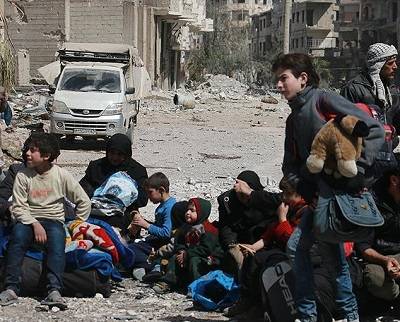 Spokesman Stephane Dujarric said the UN and its partners are working to alleviate the humanitarian crisis brought on by the offensive on Eastern Ghouta, but said "needs remain immense".

"The UN continues to call for safe, unimpeded and sustained access to all in need, and any evacuation of civilians must be safe, voluntary, and to a place of their choosing," he said. "It is imperative that civilians have the right of return as soon as the situation allows."

On Feb. 24, the UN Security Council unanimously adopted Resolution 2401 that called for a cease-fire in Syria -- especially in Eastern Ghouta -- to allow the delivery of humanitarian aid.

Despite the resolution, however, the regime and its allies early in March launched a major ground offensive -- backed by Russian air power -- aimed at capturing opposition-held parts of the district.

Since Feb. 19, more than 1,400 victims have been killed in attacks by the regime and its allies in Eastern Ghouta, according to local civil-defense sources.

Home to some 400,000 residents, the district has remained under a crippling regime siege for the last five years which has prevented the delivery of badly needed humanitarian supplies.