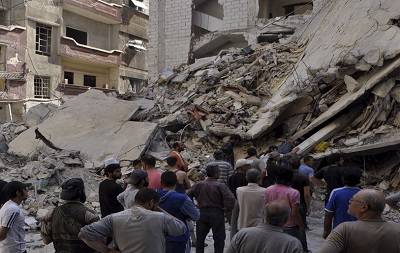 People 'sleeping in the streets and begging for medicine' as Assad regime steps up offensive in southern Damascus.

An estimated 3,500 Palestinians have fled the embattled Yarmouk refugee camp during a week of violence, according to the UN, as the Syrian regime escalates its ongoing military operation in southern Damascus.

Yarmouk, which has been besieged by the Syrian regime and opposition groups since 2013, was once home to nearly 200,000 people, among them Palestinian refugees, Syrians and others.

"Those stark figures tell their own tragic story, of the destruction of a once thriving refugee community, now reduced to abject, untold suffering," Chris Gunness, a spokesperson for UNRWA, the body responsible for Palestinian refugees, told Al Jazeera.

"Many are sleeping in the streets and begging for medicine.

"There is almost no water or electricity. Their suffering is unimaginable."

On April 19, the Syrian regime and allied armed groups, including some Palestinian factions, launched a renewed military offensive targeting Yarmouk and surrounding areas citing the presence of fighters.

Among the fighters present in Yarmouk are those from the Islamic State of Iraq and the Levant (ISIL) group, and Hay'et Tahrir al-Sham (HTS), formerly known as Jabhat al-Nusra.

Monitors have accused the regime of carrying out an intense campaign of air raids as well as using barrel bombs, missiles and shells.

As of Friday, at least 31 people had been killed over a week of intensified violence, according to the UK-based Action Group for Palestinians of Syria.

Inside the camp, there are currently no hospitals or medical facilities operating, the Action Group said, adding that up to 60 percent of Yarmouk has been destroyed.

"We are calling on all sides in this conflict to take measures to spare civilians and civilian infrastructure," UNRWA's Gunness said.

"And we are asking that civilians, the wounded, the sick who want to leave to have safe passage. We also urgently need humanitarian access to distribute assistance."

Gunness further said that armed groups and regime forces should respect "international law … at all times".

Before the war in Syria broke out in March 2011, about 560,000 Palestinian refugees, who were originally displaced from their homeland during Israel's 1948 establishment, lived in camps, cities and towns across the country.

UNRWA estimates that more than 120,000 Palestinians have been displaced yet again, some of them multiple times.

With the latest round of fighting, the number of Palestinian refugees left in Yarmouk camp could have sunk to "just a few hundred", Gunness said.

In a joint report published last week with other watchdogs, Action Group for Palestinians of Syria said the camp had been targeted with at least two air raids every 90 seconds during the ongoing offensive.

Yarmouk is not the only Palestinian refugee camp that has endured violence during the war.

Earlier this month, clashes between Syrian regime forces and armed opposition groups took a heavy toll on the civilian infrastructure in Deraa camp, where up to 80 percent of the homes and buildings have been destroyed or damaged throughout the seven-year war.

Residents of that camp have endured frequent clashes, a lack of basic humanitarian services and periodic water cuts, some lasting for up to 1,475 days, according to the Action Group.

In March 2011, a large-scale uprising against Bashar al-Assad broke out.

Since then, the conflict has morphed into a full-scale civil war that has left hundreds of thousands dead and displaced millions.

At least 3,729 Palestinian refugees have died throughout the seven-year conflict, while another 309 are considered missing and 1,674 are imprisoned, as reported by the Action Group.

In January, US President Donald Trump threatened to withdraw funding for UNRWA if Palestinians did not return to negotiations with Israel.

Trump's comments, which were repeated by Nikki Haley, the US ambassador to UN, prompted widespread criticism.

In response, 21 aid groups voiced their staunch condemnation of the decision, warning of "dire consequences" for Palestinian refugees, including those in war-torn Syria.