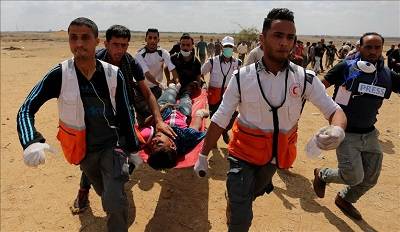 The attacks on Palestinian protesters by Israeli forces on Monday are “willful killings constituting war crimes,” the Amnesty International said.

“This is another horrific example of the Israeli military using excessive force and live ammunition in a totally deplorable way. This is a violation of international standards, in some instances committing what appear to be wilful killings constituting war crimes,” said Philip Luther, research and advocacy director for the Middle East and North Africa of the human rights watchdog.

At least 43 Palestinians were martyred and hundreds injured on Monday by Israeli gunfire during anti-occupation rallies in the Gaza Strip, according to the Health Ministry.

“Today’s footage from Gaza is extremely troubling, and as violence continues to spiral out of control, the Israeli authorities must immediately rein in the military to prevent the further loss of life and serious injuries,” Luther said in a statement.

He said: “Only last month, Amnesty International called on the international community to stop delivery of arms and military equipment to Israel. The rising toll of deaths and injuries today only serves to highlight the urgent need for an arms embargo.

“While some protestors may have engaged in some form of violence, this still does not justify the use of live ammunition.

“Under international law, firearms can only be used to protect against an imminent threat of death or serious injury.”

Thousands of Palestinians have gathered on Gaza Strip’s eastern border since early morning to take part in protests aimed to commemorate the Nakba anniversary and protest relocation of the U.S. Embassy from Tel Aviv to Jerusalem.

The rallies will culminate on Tuesday, May 15, the 70th anniversary of Israel's establishment -- an event Palestinians refer to as the "Nakba" or "the Catastrophe".

Since the rallies began on March 30, at least 49 Palestinian demonstrators have been killed and hundreds injured, according to Health Ministry figures.

Last week, the Israeli government said that rallies are a part of state of war and human rights laws are not applicable in such case.

“Early medical reports from Gaza today indicate that dozens of people have been shot in the head or chest. Amnesty International last month documented research from the Gaza Strip that showed the Israeli military were killing and maiming demonstrators who pose no imminent threat to them,” the rights group said in a statement.

The UN on Monday urged Israel to stop the disproportionate use of force against Palestinian demonstrators in the Gaza strip and initiate an impartial and independent investigation into killings of protesters.

"Alarmed by the disproportionate use of force displayed by the Israeli Security Forces (ISF) against Palestinian demonstrators […] which has resulted in the death of at least 40 people, among them five children and in thousands of persons being injured," the UN Committee on the Elimination of Racial Discrimination said.

Palestinians carry a wounded man during a protest, organized to mark 70th anniversary of Nakba, also known as Day of the Catastrophe in 1948, near Gaza-Israel border in Khan Yunis, Gaza on May 14, 2018.