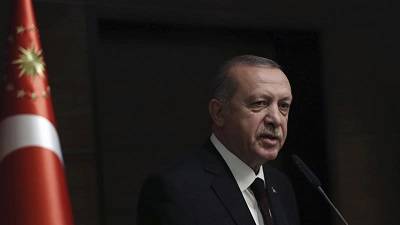 A Turkish court handed life sentences to 104 suspects over their involvement in the July 2016 attempted coup, according to state media.

The former military personnel were given "aggravated life sentences" by a court in the western province of Izmir on Monday, state-run Anadolu news agency said, for "attempting to overthrow the constitutional order".

In total, 280 military staff are on trial over the failed coup bid.

There was an alleged plot to kill President Recep Tayyip Erdogan on the night of the coup while he was on holiday in the Aegean resort of Marmaris with his family. The president says he was saved by 15 minutes from the plot.

The attempted coup claimed more than 240 lives, according to the Turkish presidency, not including the coup-plotters.

More than 2,000 people were injured in the incident.

Turkish authorities say the movement Gulen runs is a "terrorist" organization, claiming that its members have been running "a parallel state" within the civilian and military bureaucracy and following their own agenda. Gulen denies the claims.

Following the attempted coup, tens of thousands of people have been arrested and public workers have been sacked or suspended over alleged links to outlawed Gulen or Kurdish fighters under the state of emergency imposed in July 2016.

Turkey has come under heavy criticism from its Western allies and activists over the scale of the crackdown and repeated calls for the emergency to come to an end.