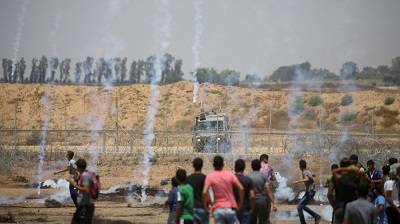 For more than two months, Palestinians in the Gaza Strip have been protesting along the fence with Israel, demanding their right to return to the homes and land their families were expelled from 70 years ago.

The mass Friday demonstrations have since continued.

Since the protests began on March 30, Israeli forces have killed 124 Palestinians in the besieged coastal enclave and wounded more than 13,000 people.

Latest updates as of Friday, June 8

The UN General Assembly will hold an emergency meeting on Wednesday to vote on an Arab-backed resolution on Gaza, the body's president Miroslav Lajcak has announced.

The resolution will condemn Israel, and will be similar to one vetoed by the United States in the Security Council last week, which called for protecting Palestinians from Israeli aggression, according to diplomats.

Health officials in the Gaza Strip say the number of Palestinians killed by Israeli forces during protests near the fence with Israel has risen to four.

More than 600 people were wounded by Israeli forces, including photographer Mohammed Abed al-Baba, who was shot in the leg.