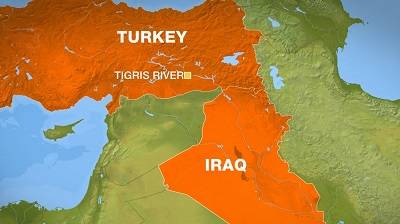 Turkey has decided to postpone filling a massive upstream dam amid rising concerns in neighbouring Iraq that declining water levels in the Tigris River may pose an immediate threat to the country's water flow.

At least 70 percent of Iraq's water comes from rivers and marshes shared with its neighbours, especially the Tigris and the Euphrates rivers - both of which run through Turkey.

Ankara started filling the Ilisu Dam - one of 22 dams and 19 power plants being built as part of the Southeastern Anatolian Project - on June 1, but on Thursday it announced that it was halting operations.

"As of this moment, the water of the Tigris River will flow into Iraq without a single drop touching the gates of the Ilisu Dam which we've now opened," said Fatih Yildiz, Turkey's ambassador to Iraq.

Speaking at a press conference, Yildiz said: "stability played an important role in our decision to postpone filling the dam."

He added: "Turkey will continue to show the cooperation and sacrifice needed to help our Iraqi brothers overcome the water crisis."

Experts say the amount of water flowing through Iraq's rivers has fallen by at least 40 percent in recent decades. On June 3, the Iraqi parliament called an emergency session to discuss the country's low water levels.

"I can cut across the Tigris River on foot. It breaks my heart to see it like this," Fatih al-Salaam, a 25-year-old student in the capital, Baghdad, told Al Jazeera.

"These rivers [the Tigris and Euphrates] shape our identity. It is after them that Iraq was called the land between the two rivers," added al-Salaam.

A prolonged reduction of water levels in the rivers flowing through Iraq will reduce electricity generation from hydroelectric dams and affect the water supply for agriculture, forcing the country to import more food.

The shortages could also affect Iraq's southern marshes, which were declared a UNESCO world heritage site in 2016.

While some have pointed fingers at Turkey for the water shortages in Iraq, including social media activists calling for a boycott of Turkish products, many citizens and politicians have held Baghdad responsible.

"Why are we putting the blame on Turkey? Why didn't Iraq build a dam of its own?" Malik Rashid, a 30-year-old resident of Nasiriya in southern Iraq, told Al Jazeera.

"We blame our own government for not properly managing and using our water resources."

Omar Hashim, 38, from Baghdad, agreed: "More responsibility falls on shoulders of the Iraqi government. We can only blame it [Baghdad], not Turkey, for not knowing how to plan our water security."

Capitalising on popular sentiment, Muqtada al-Sadr, the Shia leader of the Sairoon bloc that emerged victorious in last month's parliamentary elections, gave the government a deadline to begin solving the water crisis.

"If our [electoral] victory is the beginning of revenge for the citizens of Iraq, then I will not allow that to happen," al-Sadr said in a statement on Sunday, adding that his party will "work to restore the rights" of the public.

Meanwhile, Iraq's Prime Minister Haider al-Abadi has gone to great lengths to show his outgoing government did everything it could to tackle the issue.

"There are plans to secure our water resources on both the domestic and foreign fronts. Yes, there is a water shortage this year, but it is not a crisis," he said at a news conference on Tuesday.

Farming impact?
Local media has reported that al-Abadi's government was taken by surprise at the depleting water levels, but officials told Al Jazeera that Baghdad and Ankara have been in continuous contact over the issue.

"We haven't taken a single step without consulting the Iraqis," Yildiz, the Turkish ambassador, told Al Jazeera, adding that Ankara had already postponed a planned March start for the project.

"[The] low water levels are not the result of the dam," said Yildiz, adding that the two countries will monitor and evaluate the effects of the dam on Iraq's water supply.

Zafer Abdullah, an adviser at the Iraqi ministry of water resources, said climate change and irregular rainfall was to blame for the reduced water flow.

"The storage of water in Ilisu [last week] surely hasn't had the chance to impact water levels so quickly," he said.

"It would in the long run, but we are seeing these effects because of climatic conditions and the lack of rainfall."

Despite agreeing to the construction of the dam, Baghdad fears that the volume of water being withheld will impact farming.

"Drinking water will not be affected by the dam, but when it comes to agricultural needs, we are worried," Ahmed Mahjoub, spokesman for the Iraqi foreign ministry, told Al Jazeera.

"Turkey promised its dam will not harm Iraq [and its] agricultural needs in central and southern provinces, but we think the volume of water released should increase. We are trying to negotiate a better deal," added Mahjoub.

Although public attention has focused on Turkey's Ilisu dam, residents in Sulaimaniyah in Iraq's Kurdish region have reportedly been struggling to access water for several days after Iran cut off the flow of water in one of the major tributaries of the Tigris River.

The Kurdistan Regional Government (KRG) said in a statement this week that Iran "cut the water flow of a cross-border river of Little Zab", resulting in a shortage of drinking water for the residents of Qaladze.

"The situation is very bad," Akram Ahmed, general manager of dams in the KRG's Ministry of Agriculture and Water Resources told Al Jazeera. "Thousands of people can't access water for more than half an hour a day. It is an environmental and humanitarian disaster."

A committee from the Sulaimaniyah provincial council and Iran's consulate in Sulaimaniyah visited the area near Little Zab River on Tuesday to discuss the matter. The meeting was not very successful, said Ahmed.

Mohamed Ansari Fard, an adviser at the Iranian Ministry of Agriculture, denied that Tehran had cut water flow.

"The shortages [in Sulaimaniya] are a result of drought and climate change. Water shortages are a regional issue we are addressing in Iran too," said Fard, adding that Iranian farmers had also been protesting against water shortages recently.

Mahjoub, of the Iraqi foreign ministry, said Iran had cut off or diverted 42 rivers and tributaries shared with Iraq, but added that "dealing with the Ilisu Dam is more urgent".

"Iranian and Turkish water storage projects are harming water levels in Iraq, but it [shallow waters in the Tigris] has had a huge physical and psychological impact on Iraqis," said Mahjoub.