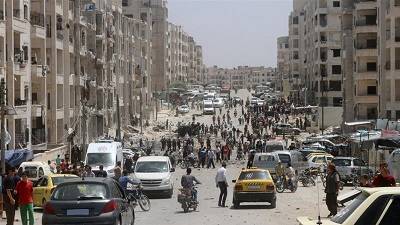 At least 16 people have been killed and 18 others wounded in Syrian regime air strikes on villages in opposition-held Idlib province, Syria's Civil Defence said.

According to the group, which operates in Syria's opposition-held areas and is also known as the White Helmets, a young girl was among the victims in Sunday's air raids.

A number of buildings and facilities in the villages of Binnish, Ram Hamdan and Taftanaz, which are controlled by opposition coalition forces, were also damaged.

"The shelling lasted for about two hours," 34-year-old Mohammed Abu al-Amin, an activist based in Taftanaz, told Al Jazeera.

"Much of the town's buildings were targeted, including the Al-Noor hospital and a family's home, who are now among the dead," he said.

The villages attacked in rural Idlib are located around the regime-held towns of Foua and Kefraya.

Syrian regime forces have utilised siege tactics during the course of the Syrian war, now in its eighth year. Usually, it is alongside heavy bombardment while preventing the entrance of food and medicine.

The tool is used as a means to force opposition forces into accepting evacuation deals.

On Friday, air raids believed to have been carried out by Russia on a village in Idlib killed at least 44 people, inflicting the highest death toll in a single attack on the region this year.

More than 60 people were also injured in the attacks that took place in the village of Zardana.

Currently, the Syrian regime is fighting opposition in Idlib, the oppositions' last major stronghold in the country.

Idlib is housing an estimated two million people, including thousands who became internally displaced from other parts of Syria.