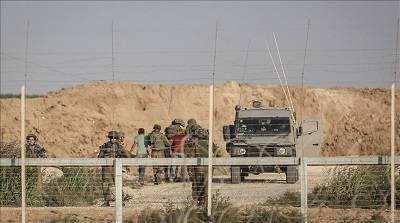 The Palestinian presidency on Monday said the U.S. was seeking to permanently separate the Gaza Strip from the West Bank on the pretext of “humanitarian” intervention, going on to stress its total rejection of a backchannel U.S. peace plan known as the “Deal of the Century”.

“The Palestinian people and leadership will not recognize the legitimacy of any U.S. or Israeli plan that involves separating the Gaza Strip from the West Bank under the guise of ‘humanitarian assistance’,” presidential spokesman Nabil Abu Rudeineh said in a Monday statement.

“These schemes,” the statement added, “aim to undermine the Palestinian national project by transforming the Gaza situation into a strictly humanitarian issue”.

Israeli daily Haaretz quoted unnamed sources as saying that the U.S. administration was trying to convince the oil-rich Gulf States to invest hundreds of millions of dollars in economic projects in the blockaded Gaza Strip and in Egypt’s northern Sinai Peninsula.

According to the newspaper, details of the U.S. peace plan will likely be unveiled this week by Jared Kushner, U.S. President Donald Trump's advisor and son-in-law, and Jason Greenblatt, Trump’s advisor on Israel.

Both men are expected to begin a tour of the region -- that will include Qatar, Saudi Arabia, Jordan and Israel -- sometime later this week.

According to remarks by Palestinian officials, Washington seeks to impose a political solution that would include the establishment of a truncated Palestinian state in Gaza while the West Bank would be granted limited autonomy.

Under such a plan, they say, Israel would remain in control of the entire city of Jerusalem.

The Palestinian territories have remained tense since the U.S. relocated its Israel embassy from Tel Aviv to Jerusalem last month.

The Palestinians want East Jerusalem -- occupied by Israel since 1967 -- as the capital of a future Palestinian state.