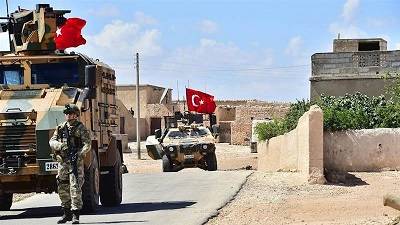 The Turkish army has said its forces have begun patrols along the outskirts of the northern Syrian city of Manbij, in cooperation with US soldiers in the area.

The announcement on Monday came after Turkish and US military officials agreed earlier this month to a plan for the withdrawal of Kurdish fighters considered "terrorists" by Ankara from the city.

The Turkish army announced on Monday the launch of the operation between Manbij and an area it controls after one of its two cross-border military campaigns along with Syrian opposition in the past two years.

"As per the Manbij Roadmap and Safety Principles previously agreed upon, independent patrol activities by soldiers of Turkish Armed Forces and US Armed Forces have begun on the line between (the Turkish-controlled) area and Manbij," Turkey's armed forces said on Twitter.

Addressing supporters at an election rally in the Black Sea province of Samsun, Turkish President Recep Tayyip Erdogan said: "We had said that terror organisations will leave Manbij.

"We had also talked about patrol missions in Manbij," he added, ahead of the country's key presidential and parliamentary polls on Sunday.

"According to Ankara, 190 Turkish troops are deployed there," Koseoglu said. "More troops will be deployed by July 5 to the Manbij area for joint patrolling operations."

Manbij was formerly controlled by ISIS group before being seized by the Syrian Democratic Forces (SDF) in 2016, a US-backed umbrella group dominated by the Kurdish People's Protection Units (YPG).

However, Turkey considers the YPG to have ties to the outlawed Kurdistan Workers' Party (PKK) and views both as "terrorist" organisations.

Turkey was infuriated by US support for the Kurdish fighters and threatened to push its offensive in the Afrin region of northern Syria further east to Manbij, risking a confrontation with American troops stationed there.

The issue of Manbij had become a major flashpoint between the two NATO allies.

But on June 4, Turkish Foreign Minister Mevlut Cavusoglu and US Secretary of State Mike Pompeo endorsed a roadmap for the withdrawal of Kurdish fighters from Manbij and agreed to jointly secure the city.

A day later, the YPG, which controls large areas in northern Syria on the borders with Turkey, announced that it had withdrawn its military advisers from Manbij.

"Turkey says it receives security threats from its southern border mainly by the YPG and PKK," Koseoglu said. "It wants to clear its borders from these threats."

She added: "Turkey insists that Manbij is an Arab-dominated city and should be stabilised and given back to its real owners."

The Turkish foreign minister also said that Turkish troops would also make their way into Manbij.

"The roadmap has begun to be implemented," Cavusoglu said. "Our soldiers will also enter Manbij, step by step. In this process, the YPG will be pushed out of Manbij. We will be there and make sure that they have left."

"The aim of the operation is to establish stability in the region held by the YPG," he added.