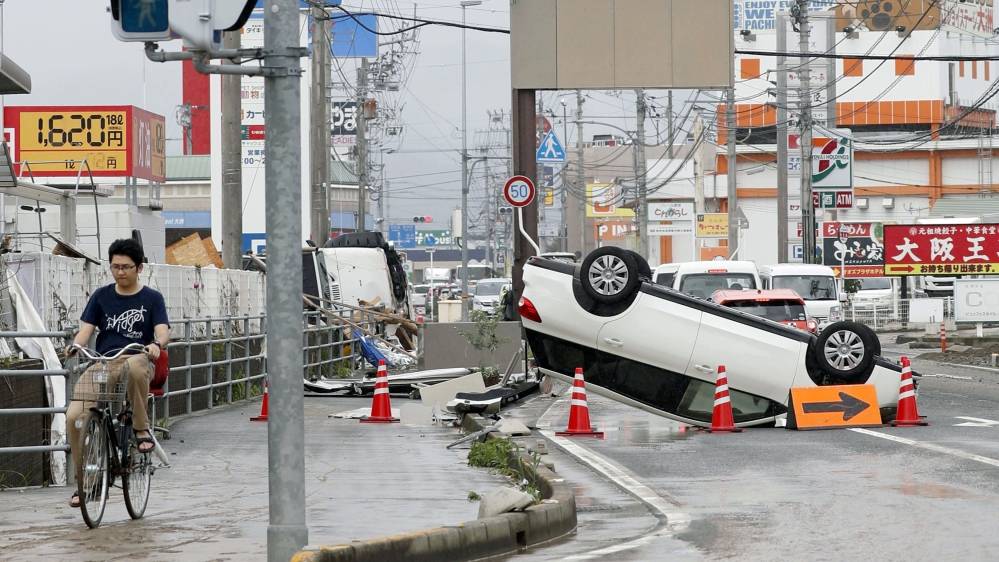 Nearly 80 people are believed to be dead in Japan after three days of torrential rain made rivers burst their banks.

The government put the number of victims at 48 with 28 others presumed dead as it issued new disaster warnings on Kyushu and Shikoku islands on Sunday.

The torrential downpours have caused flash flooding and landslides across central and western parts of the country, prompting evacuation orders for more than two million people.

"Rescues, saving lives and evacuations are a race against time," Prime Minister Shinzo Abe said as he met a government crisis cell set up to respond to the disaster.

"There are still many people whose safety has yet to be confirmed," he added.

Yoshihide Suga, Japanese government spokesman, said the whereabouts of 92 people were unknown, mostly in the southern area of Hiroshima prefecture.

More than 100 reports of casualties had been received, including reports of cars being swept away, he said. About 40 helicopters were out on rescue missions.

Emergency warnings for severe rain remained in effect for three prefectures, with 300mm predicted to fall by Monday morning in parts of the smallest main island of Shikoku.

Landslide warnings were issued in more than a quarter of the nation's prefectures.

The Japan Meteorological Agency said three hours of rainfall in one area in Kochi prefecture reached an accumulated 263mm, the highest since such records started in 1976.

The assessment of casualties has been difficult because of the wide area affected by the rainfall, flooding and landslides.

Authorities warned landslides could strike even after the rain subsides as the calamity shaped up to be potentially the worst in decades.

A residential area in Okayama prefecture, on the main island of Honshu, had brown water spreading like a huge lake through it.

Some people fled to rooftops and balconies and waved at hovering rescue helicopters. Military paddle boats were also being used to take people to dry land.

Okayama prefecture said three people had died, six others were missing and seven were injured, one of them seriously. Six homes were destroyed, while nearly 500 were flooded. Evacuation orders or advisories were issued to more than 910,000 people, the prefecture said in a statement.

Kyodo news service reported several deaths in a landslide in Hiroshima and more bodies were retrieved from collapsed housing in the ancient capital of Kyoto, both areas where the rainfall was heavy in the past few days.

Throughout the hard-hit areas, rivers swelled and parked cars sat in pools of water. Japan has sent troops, firefighters, police and other disaster relief. People have also taken to social media to plead for help.

In Ehime Prefecture, a woman was found dead on the second floor of a home buried by a landslide, Kyodo said. Also in Ehime, two elementary schoolgirls and their mother who got sucked into a mudslide were pulled out but could not be revived, it said.

Conditions are now improving. Drier weather is expected over the next few days as the band of rain responsible weakens while it drifts into the northwest Pacific.

There is more rain spilling across the Yellow Sea. This will bring the potential for floods across the Korean Peninsula on Monday and Tuesday but a developing area of high pressure is expected to prevent the rain crossing The Sea of Japan.