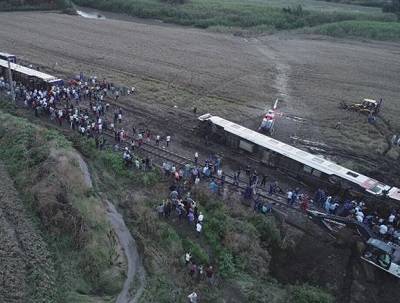 Twenty-four people were killed when a train derailed in northwest Turkey this weekend, Deputy Prime Minister Recep Akdag said on Monday, a sharp jump from the previous toll of 10.

The Anadolu news agency quoted Akdag as saying search operations this morning had now been completed at the wreck of the train, which derailed on Sunday evening in the Tekirdag region while heading towards Istanbul.

At least 73 people were wounded in the crash, state media quoted the health ministry undersecretary as saying.

The train, carrying 362 passengers, came off the rails in northwest Turkey due to heavy rains and landslides, officials said.

"A suburban train had an accident ... due to a landfall. Unfortunately, we have fatalities and casualties," a statement from the prime minister's office said.

The local governor in Tekirdag, about 120km west of Istanbul, blamed heavy rain for the derailment.

"Our helicopter ambulances have reached the site. Many of those injured have been taken off the site," Mehmet Ceylan said.

The private NTV television said that five wagons out of six wagons of the train derailed in the incident.

President Recep Tayyip Erdogan's office said he had received information from the ministers of transport and interior about the incident, and sent condolences for those killed.

Television images showed emergency personnel at the crash site, as the army announced that it has sent helicopters to the area.

The National Medical Rescue Team and Disaster and Emergency Management Presidency of Turkey are also supporting the rescue efforts, along with the military, health personnel and villagers, national media reported.

Television images showed emergency personnel at the crash site, as army announced that it has sent the area helicopters [Anadolu]