One year after battle for Mosul, a city lies in ruins 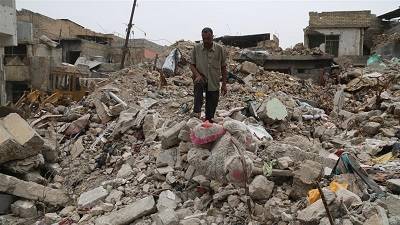 One year ago, Iraqi Prime Minister Haider al-Abadi stood in front of cameras in Mosul and declared the city recaptured after three years of being occupied by ISIL, also known as ISIS.

Clad in a black uniform and flanked by army commanders and heads of security forces that were involved in a ferocious, nine-month long battle against ISIL, al-Abadi confirmed the "failure of the terrorist state of falsehood and terrorism" in a reference to the group's 2014 takeover of Iraq's second city and declaration of a caliph state.

"From here, from the heart of the free and liberated Mosul, by the sacrifices of the Iraqis from all the provinces, we announce the awaited victory to all of Iraq, and the Iraqis," the prime minister said.

Yet the battle was far from over, and Abadi warned that Mosul would face a series of challenges in the aftermath, relating especially to stability and reconstruction as well as clearing ISIL cells and reuniting the tattered social fabric of a once pluralistic and diverse city that counted Sunnis, Shia, Turkmen, Kurds and Shabak as its residents.

Twelve months on, Mosul's residents are still struggling to rebuild their lives in a city devastated by wide-scale destruction that has decimated its infrastructure and left its economy in tatters.

In terms of reparation, little has been done regarding the damaged services and buildings following a massive military operation waged by a collective of Iraqi government units, Kurdish Peshmerga fighters and Shia militias, with air and ground support provided by a US-led coalition.

According to the Norwegian Refugee Council (NRC), $874m is required to repair the basic infrastructure in the city, which is afflicted with eight million tons of unmoved debris.

Furthermore, 54,000 houses in and around Mosul were destroyed, and hundreds of thousands of people, almost 64,000 families, were displaced and remain in camps. A total of 62 schools are completely destroyed and 207 damaged.

The Old City, which lies on the west side of Mosul, was where the ISIL fighters were concentrated and hence, where the heaviest fighting took place.

The fierce fighting left entire neighborhoods flattened, and today the Old City remains uninhabitable, with more than 3,000 houses, schools and shops destroyed. It is also one of the last areas without running water.

According to international charity Oxfam, the complete obliteration of parts of the city inevitably means that rebuilding will take some time.

"We must not just rebuild what was there before - we have to do better than that," said Andres Gonzalez, Oxfam's country director in Iraq.

"We need to prioritize the most vulnerable people who lost everything in the battle against ISIS, young people who missed out on years of education, and women and men whose freedom was severely curtailed."

Challenges met with willpower and resolve

Mohammed Masoud, a 30-year-old student at Mosul University, told Al Jazeera that he belongs to one of the youth-organized volunteer groups that set to work clearing rubble and booby-traps on campus and in the city's streets in the immediate aftermath of ISIL's defeat.

"We as youth believe in the importance of our role in rebuilding this city more than ever, but we need lots of support," he said.

The university, an institution renowned for its high standards before ISIL's takeover, is but a shadow of itself now, added Masoud.

"The campus doors have managed to stay open after the university was mostly closed during the three years ISIL was in power, and there is regular attendance where thousands of students have returned, but there is no hiding the fact that entire department buildings have been decimated," Masoud said.

Some 30,000 books in the main library, which used to hold around one million, were burned by ISIL, he continued, and the university still suffers from lack of electricity, air conditioning and basic supplies. Yet while the university is functioning, the future of the students remains bleak, with 80 percent of youth unable to find jobs, according to NRC.

In the city itself, the health sector has been severely affected - up to 90 percent of it destroyed. Where there used to be 10 hospitals, there is now only one that services Mosul's population of 2.5 million, forcing people to travel to other areas across Iraq for treatment.

Still, Masoud is optimistic his hometown will flourish again, even if it takes some time.

"With our willpower and resolve of Mosul's residents, life is returning to the city," he said.

"We want to live normally, with schools open and police to keep order. The city is slowly recovering and coming out of a war - the same of which can be said of the role of the government, which is understandably weak and cannot cover the demands of the city."

"The situation will not remain the way it is currently but will improve for the better," he added.

But others like Gmela Obaidy, a member of the Iraqi parliament, are not as hopeful.

"The local government here is overworked and overstretched; the local police force is still suspended; and we still haven't seen any compensation for families who lost their homes, many of whom remain in displacement camps."

There are no basic services available despite the best intentions of the local councils in the province, she added, and while the economy lies in ruins, the loans and aid packages given to the central government by the international community is greatly insufficient.

And while the scarcity of fuel and electricity is a major issue, Obaidy said the abductions of men, women and children by unknown groups - some targeted for being relatives of ISIL fighters - is the most important cause for concern.

"These arrests, or kidnappings, are completely unaccounted for," she said. "This only cements chaos in the province, with potential far-reaching consequences. Law and order has not made it back to this province."

While she praised the resilience of local councils in the absence of what she called the central government's lethargic response, Obaidy said that she has "no hope" for the future, particularly after the last general election which took place on May 12.

The Supreme Court has since ordered a manual recount of ballot boxes following allegations of fraud count from de-seated MPs.

"There were attempts by myself and fellow parliamentarians to postpone the election campaign to give time for territories that were occupied by ISIL more preparation," Obaidy said.

"How can voting happen when we have displaced people, citizens who lost their government ID cards and unable to vote, and a general untenable situation?"

Younis Daoud, head of the engineering department at Mosul University, said that it was difficult to describe the mass scale level of destruction in Mosul, and that the efforts to rebuild the city were daunting.

"The Nineveh province needs a committee to rebuild not just the physical nature of the city but on the psychological level too, to heal people of their trauma and bring back their cohesion," he told Al Jazeera.

"There has to be a concentrated effort from the regional and international countries to support and fund the rehabilitation of Mosul, and to bring Iraq's economy back from the ruins."

Daoud said that the Iraqi government has shown on more than one occasion its ineptitude to bear the brunt of reconstruction alone.

"We expect international organizations to play their part in helping to rebuild some of the liberated territories, and in conjunction with the Nineveh Provincial Reconstruction Advisory Group to assist in restoring the fields of health and education, municipal services, running water and sewage, building roads and bridges."

The head of the Ninevah Reconstruction Advisory Group, Mazahim al-Khayat, placed a 10-year plan to rebuild the city, but the blueprint is riddled with holes and obstacles mainly, Daoud said, due to international financial aid coming in drips and being nowhere near the cost of reconstruction.

"We need a lot of external help," Daoud said. "At the same time we need to form committees based on coexistence to preserve the society and heal the wounds."

"Now, the Old City resembles Hiroshima, and there are still bodies somewhere under the rubble. There are no official stats on how many civilian were killed in the battle for Mosul, but every home has suffered a loss."

Destroyed buildings are seen in Mosul, which was retaken from ISIL fighters a year ago [Reuters]