Palestinians killed in separate events in Gaza and East Jerusalem 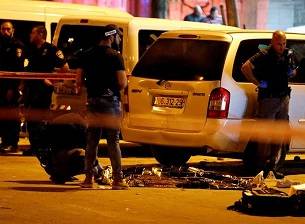 Three Palestinians were killed in the Gaza Strip and occupied East Jerusalem after they were shot by Israeli forces in separate events.

In northern Gaza, thousands of protesters demonstrated on Tuesday afternoon near the Israeli checkpoint crossing Erez, referred to by Palestinians as the Beit Hanoun crossing.

The protest was called for by the National High Committee to Break the Siege and was against the cuts in funding by the United States to the main United Nations refugee agency for Palestinian refugees, UNRWA.

Protesters also demanded an end to the 12-year blockade imposed on the coastal enclave.

More than 30 others were wounded, the ministry added.

Palestinians in Gaza have been protesting along the fence east of the strip against the siege and for their right of return as part of the Great March of Return rallies since March 30.

More than 170 Palestinians have been killed by Israeli sniper fire and 18,000 others wounded.

Last month, the US declared it would halt all funding to UNRWA, creating a $300m deficit. Palestinian refugees benefit from a number of services the UN agency provides, ranging from schools, health centres, vocational training, and food handouts.

In a separate incident, Israeli forces in East Jerusalem shot dead a Palestinian man after they alleged he was about to carry out a stabbing attack against an Israeli in the Musrara neighborhood near Damascus Gate.

Witnesses, however, told local Palestinian media agency Wafa that the man, 26-year-old Mohammed Yousef Alayan from Qalandiya refugee camp, was not armed and had gotten into an argument with the Israeli man.

Upon the intervention of Israeli forces, the witnesses said, Alayan tried to get away but was shot down with a barrage of bullets.

Police then closed off the area and prevented medics from reaching Alayan, whose body is still held by the Israeli army.