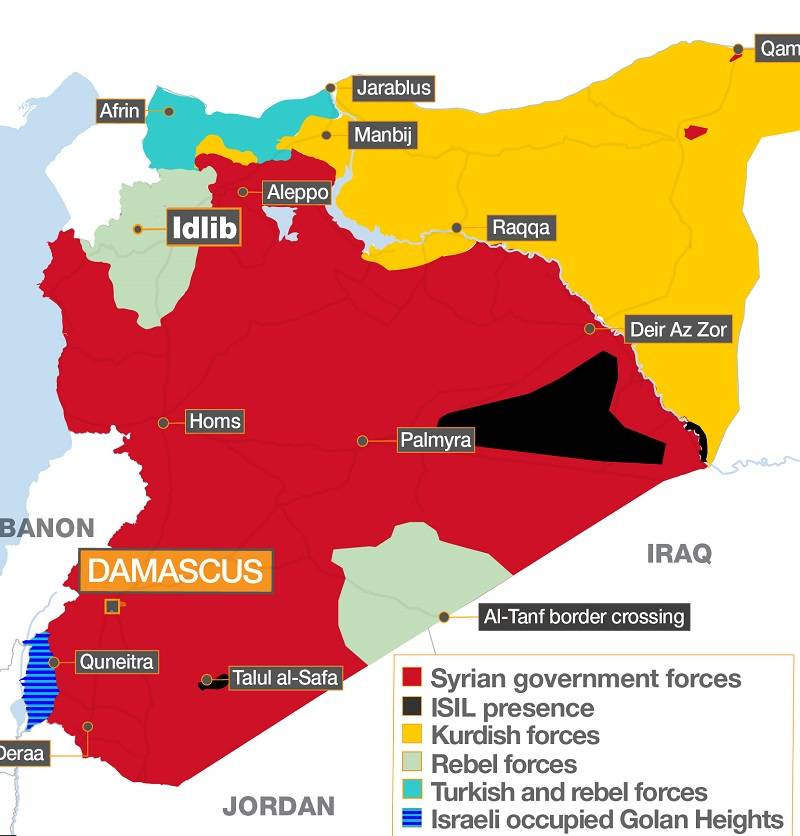 Civilians in Syria's last opposition-held bastion have cautiously welcomed a "fragile" agreement signed by Ankara and Moscow to create a demilitarized zone that put on hold a threatened offensive on Idlib, even as they expressed concerns over whether the deal will last.

Residents of the province and its suburbs, home to nearly three million people - half of whom are internally displaced - have also questioned the willingness of Syrian regime to abide by the agreement, described by observers as a diplomatic breakthrough.

The 15 to 20km-wide zone, expected to be implemented by October 15, would allow the "withdrawal of all radical fighters" from Idlib, Russian President Vladimir Putin said at a press conference with his Turkish counterpart.

Dr Habib Kshouf said people in his village of Kherbet Eljoz were genuinely scared of a full-scale regime-led assault prior to the agreement.

"The Sochi agreement gave people a glimpse of hope, that they would be spared an aerial and ground assault by regime forces and Russia - at least for the time being," the 55-year-old told Al Jazeera from Jisr al-Shughour district, which recently came under bombardment.

At least 1.5 million of Idlib's population fled the Syrian regime's advance in other provinces and now reside in makeshift camps that lack basic services such as clean drinking water and access to uninterrupted electricity.

"This [agreement] would ensure the return of electricity, water, and other basic services to people here," Kshouf said.

'Win-win' for all sides
The deal, welcomed by UN envoy for Syria Staffan de Mistura on Tuesday, also requires opposition fighters to give up their heavy weaponry.

According to Marwan Kabalan, director of the Arab Center for Research and Policy Studies, the agreement is a "win-win situation for almost everybody".

"For Putin, this is the best he can achieve at this point of time," Kabalan told Al Jazeera.

For the Syrian regime and Russia, the deal will move opposition fighters towards the north to secure a highway that leads to the Hmeimin airbase - operated by Russia - from any attacks.

It will also allow the reopening of the M5 highway that links the capital Damascus to Aleppo, and eventually to the trade route to Turkey and Europe.

Kabalan said the agreement "should be perceived as a victory" by opposition fighters.

"The agreement did not ask for the opposition's complete disarmament," he noted. "And they will be staying in Idlib - they were not asked to relocate like they were in Deraa and Eastern Ghouta."

Yet residents are concerned about whether the agreement will hold.

The regime has been accused of "indiscriminate attacks" targeting civilian infrastructure in Idlib by NGOs and aid organizations - including Islamic Relief Worldwide - despite Idlib's inclusion in the so-called "de-escalation zones" aimed at shoring up ceasefires.

Since the beginning of September, dozens of people have been killed and wounded in air raids and attacks by the Syrian regime and allied Russian fighter jets, according to activists on the ground.

"We've seen the regime use all sorts of excuses in the past when it bombed civilians in Idlib," Yahya Daoud, a 23-year-old originally from southern Damascus, told Al Jazeera.

"So the fear of a regime assault is always intact," he said from a refugee camp in northern Idlib.

The Syrian regime had recently announced plans to launch a major military offensive on the province, long controlled by various armed opposition groups, after managing to claw back swaths of rebel-held territory across the country.

The most recent offensives launched to reclaim Eastern Ghouta and Deraa killed hundreds of civilians, despite their inclusion in the de-escalation deal agreed upon by Turkey, and Assad's allies Russia and Iran at a meeting in Kazakhstan's capital, Astana, last year.

Both Russia and Turkey are considered guarantors of the most recent agreement to establish a demilitarized zone, though the two countries back different sides in the conflict.

While Russia and Iran back al-Assad, Turkey has been a constant supporter of the moderate opposition throughout the Syrian war, now in its eighth year.

"As civilians, our trust is in Turkey [to maintain the latest agreement]," Daoud said from the Atma refugee camp.

Turkey has been trying to avoid an assault on Idlib by utilizing pledges made via the Astana diplomatic track to maintain a lasting ceasefire. Its troops have been based in Idlib's border areas since May, as well as in Syria's Afrin and al-Bab following military operations against Kurdish fighters in Syria's north.

For the past few months, Turkey, which borders Idlib, has been attempting to align opposition groups in the province with its command. Key factions in the province announced last month the formation of a new coalition with some 60,000 fighters.

"This issue [of radical groups] will always remain as a ticking bomb within this agreement because Russia and the regime will always be using their presence as a pretext to apply more pressure on Turkey," he said.

How long will the agreement hold?
The Turkish-aligned coalition of moderate fighters excludes Hay'et Tahrir al-Sham, which controls about 60 percent of the province, and two other smaller "radical" groups, Kabalan explained.

It is unclear how these fighters will react to the deal's conditions of disarming and moving further north, which has raised new fears among Idlib's residents who say certain factions may be unwilling to relinquish control of the new zone and give up their arms.

"We're still confused. We're not sure how this agreement is going to play out," Hikmat al-Alis, 25, told Al Jazeera from the town of Ariha.

"With HTS asked to remain outside of the new zone, will this mean the start of a new battle?"

Fears of Hay'et Tahrir al-Sham launching attacks from border areas have also had civilians consider the consequences of opposition infighting.

According to Kabalan, Turkey is attempting to persuade "radical groups" to comply with the agreement, threatening any pushback may result in a military operation.

If these groups do not comply, a Turkish-Russian understanding may leave HTS, formerly al-Nusra Front, facing the consequence of a coalition attack.

"That would mean the moderate opposition aligned to Turkey would force al-Nusra to comply with the terms of the agreement," Kabalan said, warning another "bloodbath" could ensue.
The agreement may also falter if there is a shift in power.

Fears of a potential chemical attack are particularly high, which has lead Idlib's residents creating gas masks from paper cups.

"We fear the use of chemical weapons the most, which could break the [new] fragile agreement," Rayyan Abdulrahman, 28, told Al Jazeera from Idlib city.

The US has warned the Syrian regime against the use of chemical weapons and threatened another military response.

In April, Washington and its allies responded to the Syrian regime’s use of chemical weapons in the town of Douma with a barrage of missile strikes.

"As long as Russia needs Turkey in Syria, they will try to honor this agreement," Kabalan said.