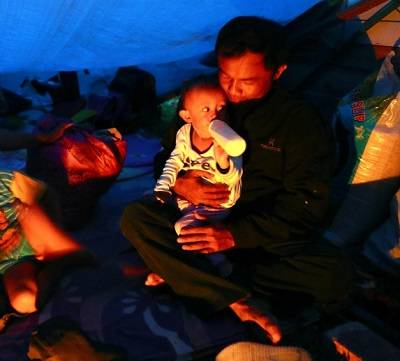 The death toll from an earthquake and tsunami on the island of Sulawesi in Indonesia has climbed to 1,347, according to the country's disaster management agency, as rescue teams scramble to search for survivors buried in the rubble from the deadly disaster.

Authorities and aid workers struggled to reach the affected areas made inaccessible by damaged infrastructure on Tuesday, four days after the disaster hit Palu, a small city about 1,500km northeast of the capital, Jakarta, and other parts of Sulawesi Island.

Some remote areas have been largely cut off after Friday's magnitude 7.5 quake triggered massive tsunami waves, destroying roads and bridges; their losses have yet to be determined.

"The team is racing against time because it's already D+four," Sutopo Purwo Nugroho, spokesperson for the National Disaster Mitigation Agency, told reporters in Jakarta on Tuesday, referring to four days since the quake.

More than 65,000 homes have been damaged and at least 60,000 people have been displaced and are in need of emergency help, according to the government.

"Experts here say that just by looking at the devastation, one must expect the number of those dead to rise in the coming days because many areas remain unreachable and the full extent of the devastation has yet to be realised," said Al Jazeera's Jamela Alindogan, reporting from Makassar, a port city in eastern Sulawesi.

Earlier, President Joko Widodo called for reinforcements in the search for survivors, saying everyone had to be found.
About 1,700 homes in one Palu neighbourhood were swallowed up, with hundreds of people believed buried, the national disaster agency said.

Among those killed in the area were 34 children at a Christian bible study camp, a Red Cross official said.

There was also mounting concern over Donggala, a region of 300,000 people north of Palu and closer to the epicentre, and two other districts - with a combined population of about 1.4 million.

Initial reports from Red Cross rescuers who had reached the outskirts of Donggala district were chilling.

"The situation in the affected areas is nightmarish," Jan Gelfand, head of the International Federation of Red Cross and Red Crescent Societies (IFRC) office in Jakarta, said in a statement.

"The city of Palu has been devastated and first reports out of Donggala indicate that it has also been hit extremely hard by the double disaster," Gelfand said.

Al Jazeera's Andrew Thomas, reporting from Palu, said there was "a pungent smell of decomposing bodies" in the city.

"Not all the bodies have been buried, I can say that from the smell we encountered as we got down to sea level," he said. "It's a very dark city in every sense of the word."

With roads cut off by landslides and major bridges broken down, physical access remains a "real challenge", according to Nigel Timmins, Oxfam's humanitarian director.

"The other one is information," he told Al Jazeera. "Electricity is down, telecommunication is down. For many people, their first priority is family tracing."

Muzair, a resident of the Petobo neighbourhood in Palu, says five of his relatives are still missing.

"I hope the government can help find them," he said.

"The soil was churning and then it suddenly rose up and buried the houses. In my heart I said if this is the time I die, what more could I do? I just prayed to God."

There are also reports of children showing up alone at medical centres, searching for their parents.

Commercial airlines have struggled to restore operations at Palu's quake-damaged airport but military aircraft took some survivors out on Monday, with some 3,000 people thronging the airport, hoping for any flight out.

A navy vessel capable of carrying 1,000 people at a time was due to be deployed to help with the evacuation.

The power company was working to restore electricity while the state oil firm had sent in fuel, officials said.

Teams of police were out on the streets on Tuesday, clearing debris and providing some reassurance to traumatised residents worried about looting.

Police said they had arrested dozens of people for looting in Sulawesi, where survivors have raided shops for water, food and other goods.

On Monday, Widodo authorised the acceptance of international help amid a lack of equipment and aid materials.

The European Union, the US and China are among more than 10 countries who have offered assistance.

Australian Prime Minister Scott Morrison said Tuesday that his government had given $360,000 to help victims and was in talks with Indonesian authorities about a second round of aid.

The initial funds would go to the Indonesian Red Cross for the most obvious emergency aid needs, such as tarpaulins.

"It is clear that the focus of the Indonesian government would be to send basic fuel, medicine and aid to those who need it and additional personnel because security is becoming a major concern as more people become desperate for aid," said Al Jazeera's Alindogan.

"There have been foreign pledges for help but at this point the main issue here is logistics, there is a need to clear the airport and to clear the roads that lead to these devastated areas in order for the humanitarian convoy, volunteers and rescuers to get in and start working," she added.

Because of its location on the Pacific "Ring of Fire," Indonesia is prone to earthquakes, tsunamis and volcanic eruptions and is well versed in responding to disasters.

A massive earthquake off Sumatra Island in 2004 caused a tsunami that killed 230,000 people around the region, the majority of them in the Indonesian province of Aceh.

That was the last time the country had declared a national disaster.

Local residents affected by the earthquake and tsunami in a temporary shelter in Palu, Central Sulawesi, Indonesia [Athit Perawongmetha/Reuters]