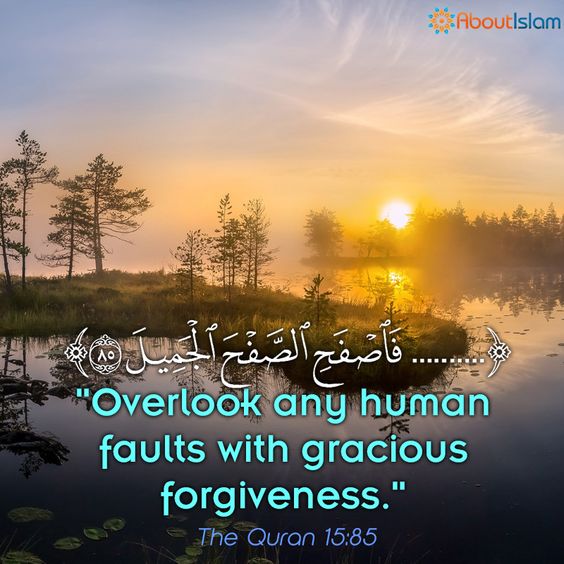 Most people strive to attain happiness and success. In fact, true success in life lies in a person’s sincerity, his devotion to his Lord, his abidance by the provisions of the Sharee‘ah that his Lord legislated, mirroring the noblest and best morals in his interactions with people, and guarding his tongue against delving into what does not concern him as well as idle talk. The Prophet

instructed the Muslims to channel their energy into what benefits them and avoid what harms them. In an authentic Hadeeth, the Prophet

said: ~“Part of the perfection of one’s Islam is his leaving that which does not concern him.”~~ [At-Tirmithi: Hasan]

Out of his keenness to instill love and brotherly affection in the members of his nation, the Prophet

His statement ~“Whoever sees”~~ is evidence that (the obligation of) forbidding evil is conditional upon actual vision. This means that if an evil is committed in private and a Muslim does not see it but knows about it, then – according to the reported opinion of Imaam Ahmad

in most narrations reported on his authority – he is not required to forbid it nor should he attempt to investigate what he finds suspicious about the perpetrator.

Therefore, it is impermissible for a person to think ill of people or speak ill of them based on his negative assumptions about them regarding their potential committing of evil, because “seeing” is not the same as “assuming”. Moreover, part of a person’s well-being lies in the gracious overlooking people’s sins and faults as long as they do not make them public as well as avoiding scrutinizing every insignificant and trivial matter.

said: ~“Whoever pursues the faults of his Muslim brother, Allah will pursue his faults, and if Allah pursues his faults, He will expose him even if he is in the confines of his own home.”~~

So fear Allah, you who pursue the faults and scandals of others and expose them on social media and in other gatherings and forums, and be aware that the one who pursues people’s faults is of the most wicked and evil people.

An Arab poet said (what means): “The most wicked are those who are preoccupied with people’s faults, just as flies are attracted to filth!”

Make the attainment of happiness in the afterlife one of your goals in this life so that Allah, The Exalted, would conceal your imperfections; there is no such thing as a flawless person! You should also know that your words are recorded and you shall be held accountable for them, and ask your Lord to conceal your faults and flaws.

An Arab poet once said (what means):

Islam enjoins the concealment of Muslims’ faults and the avoidance of unwarranted suspicions; Allah, The Exalted, Says (what means): #{Indeed, those who like that immorality should be spread [or publicized] among those who have believed will have a painful punishment in this world and the Hereafter...}## [Quran 24:19]

Islam  also calls for overlooking people’s faults and lapses and pretending not to have noticed them.

The early Arabs often described noble people as showing gracious overlooking of others’ faults and bashfulness in the privacy of their homes and public gatherings.

An Arab poet said (what means): “He is reticent, out of (praiseworthy) bashfulness, so much so that you would assume that he is sick while being perfectly well.”

Another poet said (what means): “He is a noble man who graciously turns a blind eye to people’s faults in the privacy of his house, and he is fearless and brave on the battlefield.”

Kuthayyir (also a poet) said (what means): “When one fails to turn a blind eye to his friend’s faults and some of his flaws, he would continue to reproach him until his last breath. He who actively pursues every slip of others will find it, but he will never have a friend!”

– was a forbearing, well-mannered, humble man who was patient with regard to what he hated, and he often graciously turned a blind eye to his companions’ mistakes. He courteously tolerated listening to what he hated from others without letting them know it or changing his attitude toward them.”

Verily, these are the moral values of the noble and dignified people. If a person wishes to lead a happy life and win people’s love and be regarded as noble, he should adopt these values.

The Arabs repeatedly recited this poetic verse (which means): “The intelligent person is not the master of his people; rather, their master is the one who pretends not to notice their flaws.”

It was narrated on the authority of ‘Aa’ishah, may Allah be pleased with her, that she said: “One day, eleven women sitting together explicitly promised each other not to conceal anything regarding their spouses. One of them said: ‘My husband behaves like a leopard when he enters the house and behaves like a lion when he goes out, and he does not ask about that which he leaves in the house.’” [Al-Bukhari, Chapter: Treating one’s family kindly]

One of the traits of the leopard is that it sleeps a lot, thus indicative of inattention to what goes on around it.Remember, dear reader, all the events that took place during your day and night, contemplate all your interactions with your family members, friends, students, teachers, or others, and see if you have graciously overlooked their mistakes or you held them accountable for every insignificant thing.

If you have not graciously overlooked people’s faults and mistakes in the past, you have in the remaining years of your life new chances that are worth seizing. You can avail yourself of them by adhering to tolerance, gracious overlooking, and turning a blind eye to people’s faults and imperfections.

An Arab poet said (what means): “You can never retain your friendship with your fellow brothers if you cannot endure their insignificant faults and mistakes. There is no such thing as ‘a perfect, flawless man!’”