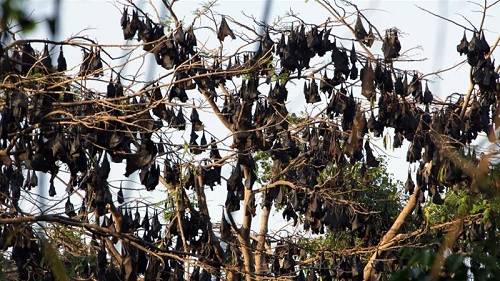 By now billions of people around the world are following advice to practise social distancing and "shelter at home" to prevent the alarming spread of a new coronavirus disease, COVID-19. The virus joins a growing list of emerging zoonotic diseases or diseases caused by bacteria, viruses, or parasites that spread from animals to humans.

These diseases could have resulted in major pandemics in the past but with expert advice and guidance, we have managed to overcome most of them and save millions of human lives.

However, as the World Health Organization notes, the threat continues and history will repeat itself. To prevent future pandemics, we need to stop two far more pervasive human practices: the relentless destruction and conversion of wildlife habitats to croplands and the uncontrolled harvesting of wild species.

Both practices are bringing more people into dangerous contact with wildlife and their pathogens.

As the human population surges towards nine billion, the demand for food and fibre is growing - along with the need for space to produce it, which means encroachment on the natural habitats of animals. This is creating a perfect storm for disease transmission. Never have so many opportunities existed for disease-causing pathogens to pass from wild and domestic animals to people.

At present, 23 percent of the planet is still in a natural state. But this is changing rapidly. Over the past 10 years, we have seen the cutting of about 3 million hectares of forest per year on average.

And, according to a UN science panel, between 1980 and 2000 alone, 100 million hectares of forested land was converted into agricultural land in the tropics.

This encroachment by croplands, subsequent loss and fragmentation of wildlife habitats, coupled with unregulated live animal markets are major factors increasing the likelihood of interaction between disease vectors and humans.

As such, any serious long-term measures to stop or eradicate zoonotic diseases like COVID-19 must include massive investments in protecting natural spaces and enforcing "buffer-distancing" around protected areas to keep humans at a safe distance from direct contact with wild species.

Well-managed and well-connected natural spaces, or protected areas, are also essential in safeguarding biodiversity and increasing the resilience of ecosystems, both on land and in the ocean.

The measures must also include the effective regulation and monitoring, and in some cases closure, of live-animal markets as well as combating the illegal trade in wildlife. The novel coronavirus most likely started in a "wet market", or live-animal market that frequently combines domesticated and wild animals and offers slaughter upon customer request.

These markets, mixed with the illegal trade in wildlife, put people and animals in constant close contact, making it easy for zoonotic diseases to jump from animals to humans.

Furthermore, humanity depends on the "ecosystem services" provided by intact forests, wetlands and other habitats. We rely on them for fresh water, carbon sequestration and flood control, among other things which make life possible. Recognising the importance of these "ecosystem services", in 2010 governments agreed on a biodiversity plan to protect 17 percent of land and 10 percent of the ocean by 2020.

Today, the targets for land have not been met, partly because funding commitments needed to do so did not materialise. A new post-2020 Global Biodiversity Framework is under discussion, which includes an ambition to protect at least 30 percent of the Earth's surface by 2030.

For it to succeed, countries must meet a 2030 deadline for the restoration of ecosystems and protection of wildlife and habitats that perform crucial services for humans, including preventing the emergence of zoonotic diseases.

For now, our focus must rightly be on the emergency response to the coronavirus pandemic and to help people and communities protect themselves and prevent the spread of the virus. This is the priority, but the reality is that any long-term response to COVID-19 and zoonotic diseases must tackle habitat loss.

There is no contradiction in fighting zoonotic diseases alongside protecting natural spaces. They are mutually reinforcing objectives. It is time to move beyond seeing investments in nature as costly indulgences but as a critical first step to protecting human health.

Fruit bats rest on trees within the forested area of Subic Bay in the province of Olongapo, north of Manila on March 6, 2009 [File: Reuters/John Javellana]