Know Allah in prosperity, and He will Know you in adversity 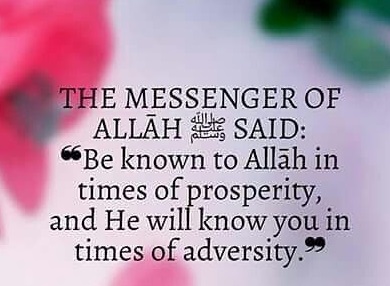 In his comprehensive advice to Ibn ‘Abbas

and all Muslims after him, the Prophet

said: “Know Allah in prosperity, and He will know you in adversity.” [This addition was authentically attributed to the Prophet

cited by Imam At-Tirmithi and others, and a number of scholars classified it as authentic]

This is an invaluable piece of advice for you, dear Muslim, if you wish that Allah, the Exalted, protects you during times of adversity and tribulation, shields you against misfortune and afflictions, and guards your religiosity against temptations that lead you astray. So know Allah at times of prosperity. When a slave of Allah fears his Lord at times of prosperity, honors His boundaries, fulfils His Rights over him, obeys His Commandments, avoids His Prohibitions, and glorifies Him at all times and in all states, he develops a special knowledge of Allah and a love and affection for Him that entail earning His Protection at times of adversity.

If you are enjoying good health and wellness, wealth and richness, safety and welfare, (find) comfort in your family, tranquillity in your marital life, your children are obedient to you, and your affairs are favourably going well, as you wish, then you are indeed relishing prosperity and bliss. This should not hinder you from devoting time to worship, abundantly supplicating Allah, reciting Quran and Thikr (expressions of remembrance of Allah), and performing good deeds.

Do not be an ungrateful slave who only knows his Lord and turns to him during times of need and destitution.

Do not be an ungrateful slave who supplicates his Lord (only) when afflictions befall him, then, whenever He bestows upon him a blessing, he forgets Him Whom he once called upon and ascribes equals to Him! Instead, accustom yourself to resort to Allah before adversities befall you. All people are good at turning to Allah during times of adversity and need, even the Arab polytheists (in the early days of Islam), the disbelievers all over the world, and the atheists throughout the history of mankind. Allah, The Exalted, Says (what means) about them: {And when they board a ship, they supplicate Allah, sincere to Him in religion. But when He delivers them to the land, at once they associate others with Him} [Quran 29: 65]

A brother related to us that he once boarded a plane departing from an Arab capital city and heading to Moscow, the capital of atheism in the world. The plane carried a large number of those who say: “There is no god.” During the flight, the plane flew into a thundercloud and was tossed violently in extreme turbulence, so much so that all the passengers were certain of their imminent demise! He said: “Every single passenger on that plane raised his hands asking Allah to save him.” Allah, The Exalted, spoke the truth when He Said (what means): {It is He Who enables you to travel on land and sea until, when you are in ships and they sail with them by a good wind and they rejoice therein, there comes a storm wind and the waves come upon them from everywhere and they assume that they are surrounded, supplicating Allah, sincere to Him in religion, “If You should save us from this, we will surely be among the thankful.” * But when He saves them, at once they commit injustice upon the earth without right...} [Quran 10: 22-23]

Heroism is not in remembering Allah, the Exalted, at times of need, destitution, adversity, and distress. Everyone is good at that, as we said before. True heroism, rather, is in remembering Him at times of prosperity, showing gratitude to Him for His Blessings, striving to earn His Pleasure (through good doing), fulfilling His Rights, and adhering to the (straight) path He chose for you.

As for those who do not know their Lord except at times of adversity and forget Him at times of bliss and well-being, Allah, the Exalted, rebuked their behavior and dispraised them in many verses of the Quran. He Says (what means):

·      {And when adversity touches man, he calls upon his Lord, turning to Him [alone]; then when He bestows on him a favor from Himself, he forgets Him Whom he called upon before, and he attributes to Allah equals to mislead [people] from His way. Say, “Enjoy your disbelief for a little; indeed, you are of the companions of the Fire”} [Quran 39:8]

·      {And when affliction touches man, he calls upon Us, whether lying on his side or sitting or standing; but when We remove from him his affliction, he continues [in disobedience] as if he had never called upon Us to [remove] an affliction that touched him. Thus is made pleasing to the transgressors that which they have been doing} [Quran 10:12]

·      {And when We bestow favor upon man, he turns away and distances himself; but when evil touches him, then he is full of extensive supplication} [Quran 41:51]

There are many verses to the same effect, and they point to a reality that most of us live. As long as we are relishing well-being, we are heedless of Allah, far from Him, far from worshiping and obeying Him, and neglectful of supplicating Him. However, the moment an adversity, anguish, disease, or tribulation befalls us, we raise our hands to Him with extensive supplication.

During times of adversity, Allah, the Exalted, only answers the supplications of those who knew Him and turned to Him during times of prosperity. Therefore, accustom yourself to resort to Allah before adversity befalls you, sharpen your arrows (of supplication) before shooting them (to ensure their acceptance), and increase your credit (of good deeds) with Allah, The Exalted, at the time of ease so that you could withdraw from it at times of need and distress.

when the whale swallowed him. He called upon his Lord while enveloped in three layers of darkness: the darkness of the night, the darkness of the sea, and the darkness of the whale’s belly. Allah, the Exalted, Says (what means): {…And he called out within the darknesses, “There is no deity except You; exalted are You. Indeed, I have been of the wrongdoers”} [Quran 21:87] Allah also Says (what means): {So, We responded to him and saved him from the distress. And thus do We save the believers} [Quran 21:88] Allah, The Exalted, clarified the reason for accepting his supplication and saving him from this strange place from which no one ever comes out alive. He Says (what means): {And had he not been of those who exalt Allah, He would have remained inside its belly until the Day they are resurrected.} [Quran 37:143-144] This means that if it were not for his abundant remembrance of Allah, supplication, and obedience at time of prosperity, He would not have saved him during times of distress and adversity.

that his prayer was not asking to save him from the suffering he was going through; rather, he was praising his Lord, confessing his mistakes, and regretting on that. In other word, he was truly repentant. Yes, the sincere repentance of a slave of Allah is very much important in his life.

On the opposite end is Fir‘awn (Pharaoh), may Allah curse him, who was blessed with Allah’s Favors but arrogantly disobeyed Him, disbelieved, and stubbornly failed to show gratitude to Him for His Blessings and Grace. When he was drowning, he supplicated his Lord – just as Yoonus did – but the response was drastically different; Allah, the Exalted, Says (what means): {Now? And you had disobeyed before and were of the corrupters?} [Quran 10:91] It means, “At the time of prosperity, you disbelieved, turned arrogant and tyrannical, and you forgot your Lord, and therefore, you do not have any credit with Us like the credit Yoonus had, so: {...today We will save you in body that you may be to those who succeed you a sign...} [Quran 10:92]

said: “Whoever wishes that Allah answers his supplication during hardship and grief, let him supplicate plentifully at times of ease.” [Imam At-Tirmithi, and Imam Al-Haakim verified it as authentic]

said: “Know Allah in prosperity, and He will know you in adversity.” May the peace and blessings of Allah be upon our master Muhammad

his family, and his Companions.