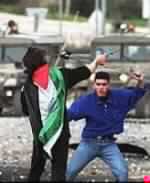 762 0 229
[Syrian soldiers celebrate their with-
drawal from the Beirut area. Read
photo caption below].

CHTAURA, Lebanon (Reuters) - Syria moved tanks out of Lebanon early on Friday, pulling back some of its big military presence but leaving doubts about whether Damascus had substantively loosened its grip on its smaller neighbor.
Lebanon praised the surprise redeployment of some of Damascus's 35,000 troops -- which began on Thursday after months of bitter complaint from Lebanon's substantial Christian minority. It said it was proof of Syria's good intentions.
``This move...confirms the depth of Syrian-Lebanese relations,'' Information Minister Ghazi al-Aridi said in a statement from the cabinet in Beirut, thanking Syria for helping Lebanon ``consolidate its security and stability.''
Witnesses saw dozens of military transport trucks carrying tanks and other equipment make for the Syrian border on the road linking Beirut and Damascus, as Syrian military police directed traffic to speed them through a town near the frontier.
Syrian troops left positions in Beirut and surrounding areas on Thursday. But it remained to be seen what the full impact of the move would be on a Syrian military presence that stretches back to Lebanon's devastating 1975-1990 civil war.
Reuters correspondents saw Syrian soldiers moving their beds and tents away from five strategic positions in the area of Yarze, one of the Christian areas of Beirut near the Defense Ministry that the Lebanese army announced Syria would quit.
Two Syrian army trucks, carrying multiple rocket launchers, drove out of Beirut followed by buses packed with Syrian troops.
A Syrian soldier, seemingly cheered by the move, borrowed a mobile phone and called his wife to tell her he would be home in a few days. But other soldiers took a camera from a Reuters Television crew and destroyed the film before returning it.
Maronite Christian Patriarch Nasrallah Sfeir, who has spearheaded the campaign against Damascus's involvement in Lebanon, was quoted as expressing his relief at the pullback but that discontent over Syria's influence remained.
``There is a still a long way to go before there are balanced ties,'' Lebanese radio quoted him as saying.
THREAT OF SECTARIAN VIOLENCE
Controversy over Syria's presence in Lebanon has taken on a sectarian cast, raising fears of the splits along confessional lines that ripped Lebanon apart during its civil war.
Damascus poured its troops into that conflict in part to spare Lebanese Christian militias defeat at the hands of Muslim, Palestinian and leftist militias. Syria then turned on the Maronite Christians after they aligned themselves with Israel.
The 1989 Taif accord, which formally ended the civil war stripped the Maronites of much of their traditional political weight, but stipulated a Syrian pullout from Beirut and other cities by 1992, a sore point with Syria's Christian critics.
The controversy also included other, non-Christian voices such as Druze leader Walid Jumblatt, a one-time ally of Damascus who has since denounced its extensive influence -- which has included vetting members of parliament and ministers.
In recent months, Lebanon's rifts over Syria's presence have shown through in big rallies by rival Christian and Muslim groups that threatened to degenerate into street fighting.
Lebanese President Emile Lahoud has brokered discreet talks between Patriarch Sfeir and top Syrian officials, and maintains a dialogue with Sfeir, who has assumed the political leadership of Lebanon's one million Maronite since the end of the war.
Jumblatt told Reuters Syria's move would help smooth bilateral ties and help reconciliation within Lebanon: ``This appears to be a step toward strengthening the internal Lebanese dialogue and the Syrian-Lebanese relationship.''
CHRISTIAN BITTERNESS, SUSPICION STILL STRONG
Political sources said Syria had considered redeploying its troops last year but froze its plans after the start of the vocal Christian campaign. Syrian made it clear to Lebanese leaders that it would not make an exit under duress.
But analysts say it was hard for Syrian President Bashar al-Assad, who succeeded his late father Hafez al-Assad last year, to ignore what has been called the ``Christian uprising.''
One of Damascus's staunchest foes slammed the pull-out as an empty gesture that did nothing to check Syrian power in Lebanon.
``This is a cosmetic move aimed at absorbing the anger against the Syrian presence,'' exiled Maronite rebel leader Michel Aoun told Lebanese television in an interview.
``The Lebanese should not be taken in by these appearances and reject this partial move,'' said Aoun, who waged a quixotic 1989 ``war of liberation'' to drive out Syrian forces.
Other Christian Lebanese, many of whom resent the influx of hundreds of thousands of Syrian labourers to Lebanon, said the real test of Damascus's intentions lay ahead.
``Does this change anything? I don't know,'' said Abdo al-Asmar, a barber in the mountain suburb of Baabda, where Syrian troops have a base near the presidential palace.
``The Syrians being here has been a given for a long time,'' he said. ``Maybe it will lead somewhere, but this is just a beginning.''
_______________________________________________________
PHOTO CAPTION