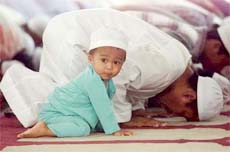 The concept of worship in Islam differs from that found in other religions and is, therefore, subject to misunderstanding. In general, worship is understood to mean the observance of certain rituals: prayer, fasting, giving charity, and other 'good' works. In Islam, however, worship is much more; it is one's entire life. The definition goes something like this: "Worship is an all-inclusive term for those internal and external sayings and actions of a person that are pleasing to Allah." In other words, worship is that which is done in obedience to Allah's will, which obviously includes rituals but goes far beyond to the realms of one’s beliefs, social activities, and personal contributions to one's society and fellow human beings.

Islam looks at the individual as a whole. He is required to submit completely to Allah, as the Quran instructed Prophet Muhammad sallallaahu 'alayhi wasallam to do; Allah Says (what means): “Say: ‘Indeed, my prayer, my rites of sacrifice, my living and my dying are for Allah, Lord of the worlds. No partner has He. And this I have been commanded, and I am the first [among you] of the Muslims.’” [Quran: 6:162-163]
The natural result of this submission is that one's activities should conform to the instructions of the One to whom the person is submitting - Allah. Islam requires that its followers conduct every aspect of their lives according to its teachings. This might sound strange to those who view religion as a personal relationship between the individual and his Lord and which should have no relevance to those activities that are not connected specifically with any religious rituals.
The Prophet Muhammad

taught his followers that Islam is much more than a private personal matter. Islam attaches no value to rituals that are performed mechanically and have no influence on one's inner life. This issue was addressed in an incident when Muslims, as well as local Jews and Christians, disputed about the prayer direction being changed from Jerusalem to the Ka'bah (the Sacred Mosque) in Makkah: Allah Says (what means): “Righteousness is not that you turn your faces toward the east or the west, but [true] righteousness is [in] one who believes in Allah, the Last Day, the Angels, the Book, and the prophets and gives wealth, in spite of love for it, to relatives, orphans, the needy, the traveller, those who ask [for help], and for freeing slaves; [and who] establishes prayer and gives Zakah; [those who] fulfil their promise when they promise; and [those who] are patient in poverty and hardship and during battle. Those are the ones who have been true, and it is those who are the righteous.” [Quran: 2:177]
The deeds mentioned in the above verse are indications that a person is righteous.
Honest work is considered a type of worship. The Prophet

said: "Whoever finds himself at nightfall tired of his work, Allah will forgive his sins." Seeking knowledge is one of the highest forms of worship. The Prophet

told his companions that "Seeking knowledge is a (religious) duty on every Muslim." Social courtesy and cooperation, when done for the sake of Allah, are also a part of worship: "Receiving your friend with a smile is a type of charity, helping a person to load his animal is a charity, and putting some water in your neighbour's bucket is a charity."
In Islam, the performing of one's duties is also considered an act of worship. The Prophet

told us that whatever one spends on his family will be counted as an act of worship for which he will be rewarded, provided what he spent was acquired by Islamically acceptable means. Kindness to family members, no matter how small, is also viewed as an act of worship. Even activities that we enjoy very much, such as sexual relations with one's spouse, are considered acts of worship as long as they are performed in accordance with the relevant Quranic and prophetic guidelines. For example, the Prophet

once told his Companions that they would be rewarded even for engaging in sexual intercourse with their wives. They were astonished and asked: "Are we to be rewarded for doing something that we enjoy very much?" The Prophet

replied: "If you satisfy your desires illegally, will you be punished?" They replied: "Yes." So the Prophet

said: "So for satisfying it legally with your wives, you will be rewarded."
It is clear from the previous discussion that the concept of worship in Islam is a comprehensive concept that includes all of the positive activities engaged in by an individual. This is in agreement with the all-inclusive nature of Islam, which regulates life on the individual, social, economic, political, spiritual, and all other levels of one's life.
Discussing non-ritualistic types of worship first does not mean those that are ritualistic are of less importance. In fact, if the latter are performed correctly and sincerely, they elevate the individual both spiritually and morally and actually help him to live a righteous life according to the guidance of Allah.
Islam has several ritualistic activities that all Muslims are expected to perform. The most important one is the prayer (Salah), which must be performed according to a specific style. Its importance derives from the fact that it serves as the distinctive trait of a Muslim and because it prevents a Muslim from engaging in sinful activities by putting him into direct contact with Allah five times a day. Thus, the ritual prayer is a chance for him to renew his covenant with Allah and to seek His guidance anew.
The second most important pillar of Islam is Zakat, a term that signifies giving to the less fortunate a certain percentage of one's earnings and holdings. Giving the poor their due and performing the prayer are usually mentioned together in the Quran, for they are both visible manifestations of one's Islamic faith and belief that Allah is the sole owner of everything in the universe, which He allows man to enjoy as His trustee for a specific period of time.
In addition, this act provides a means to redistribute society's wealth in a way that reduces differences between classes and groups. It makes an important contribution to social stability, by purging the soul of the rich person from selfishness and the soul of the poor from envy and resentment against society. This blocks the channels leading to class hatred and makes it possible for the springs of brotherhood and solidarity to gush forth. Such stability is not merely based on the personal feelings of the rich; it stands on a firmly established right that, if denied by the rich, would be exacted by force, if necessary.
The month-long fast of Ramadan (Siyaam) is the third pillar of Islam. Its main function is to make the Muslim pure from "within," just as the external legal code (the Sharee'ah) makes his external actions pure. This process of purification makes it possible for him to respond to what is true and good and to shun what is false and evil.
Fasting, then, awakens an individual's conscience and permits it to share in a communal experience that is engaged in by the entire Muslim world at the same time. Fasting also reminds Muslims of those who are deprived of life's necessities throughout the year or throughout their lives. It makes them realise the suffering of their less fortunate Muslim brothers, a feeling that promotes in them a sense of sympathy and kindness towards Muslims and other people in general.
Lastly, we come to the annual pilgrimage to the House of Allah (the Ka'bah) in Makkah. This ritual, known as the Hajj, is unique to Islam.
Muslims from all corners of the world, all attired in the same clothing, respond in one voice and one language with the following phrase upon entering the sacred precincts: "Labbayk Allahumma Labbayk" (i.e., Here I am n response to your call, O Lord!). This is a time of strict self-discipline and control where not only sacred things are revered, but even the life of plants and birds is made inviolable. Pilgrimage gives an opportunity for all Muslims, regardless of their affiliations with certain groups, classes, organisations, and governments, to meet annually in a great congress. All Muslims are invited to attend, for no individual or government can deny any Muslim the right to do so. Every Muslim who attends is guaranteed full safety and freedom as long as he does not violate its sanctity.
Thus, worship in Islam, whether ritual or non-ritual, trains the individual in such a way that he loves his Creator even more, which causes him to gain an unyielding will and a means to wipe out all evil and oppression from his society and to make the word of Allah triumphant.