Second: The first Rak’ah begins with the Takbeer (saying: 'Allahu Akbar' (Allah is the Greatest)) as is the case with all other prayers. Then the Imam (followed by the praying Muslims) recites seven Takbeerat (the plural of Takbeer). In the second Rak’ah, there are five Takbeerat other than the transmission Takbeer (i.e., the one recited when the Imam and the praying Muslims stand up to perform the second Rak’ah). ‘Aa’ishah

would recite Takbeer in (the prayers of ‘Eed) Al-Fitr and Al-Adh-ha; he would recite seven Takbeerat in the first (Rak’ah) and five in the second one, aside from the two Takbeerat that precede the Rukoo’ (bowing).”

said: “It is the opinion of most of the well-versed scholars from among the Companions, may Allah be pleased with them all, as well as those who followed them, that there are seven Takbeerat in the first Rak’ah of the ‘Eed prayer other than the first Takbeer (Takbeeratul-Ihram), and five Takbeerat in the second Rak’ah other than the transmission Takbeer, and all this precedes reciting (verses from the Noble Quran); this was narrated from Abu Bakr, ‘Umar, and ‘Ali

Third: It is not affirmed that the Prophet

would raise his hands with every Takbeer, but Imam Ibn Al-Qayyim

was a great follower of the prophetic Sunnah, his understanding and action was to raise his hands when reciting the Takbeerat.”

said in his book entitled Tamam Al-Minnah: "Although it was narrated that Ibn ‘Umar

did so (i.e., raising the hands when reciting Takbeer) it does not mean it is a prophetic Sunnah, not to mention the fact that the narration about ‘Umar and his son

also said in his book entitled Ahkam Al-Jana’iz regarding a point very close to the one under discussion: "He who believes that he (i.e., Ibn ‘Umar

) used not to do that (i.e., raising his hands when reciting Takbeer) except with the Prophet’s

approval, then he may do it.”

Fourth: Nothing was affirmed concerning any remembrance between the ‘Eed Takbeerat from the Prophet

but it was narrated (through a good chain of narrators) from Ibn Mas‘ood,

that he said about the ‘Eed prayer: “Between every two Takbeerat there is praising of Allah the Almighty and celebration of His Attributes.”

would keep silent between every two Takbeerat for a short period, but nothing is affirmed of him reciting any supplication between them.”

Fifth: When the Prophet

would recite Chapter Al-A'ala in the first Rak’ah, and Chapter Al-Ghashiyah in the second one.

said: “These two cases were affirmed from the Prophet

Sixth: The rest of the acts of the ‘Eed prayer are as those of any other prayer; nothing is different.

Seventh: Whoever misses the ‘Eed prayer with the congregation can (optionally) offer a two Rak’ah prayer instead.

said: “Whoever misses the ‘Eed prayer may (optionally) offer a two Rak’ah prayer.”

said commenting on this point of Imam Al-Bukhari

: “Regarding this point, there are two rulings:

said: "Whoever missed the ‘Eed (prayer) could offer another two Rak’ah prayer (instead)."

Eighth: Reciting the Takbeerat (in the ‘Eed prayer) is a Sunnah (i.e., a recommended deed) which, if missed intentionally or out of forgetfulness, does not nullify the prayer, and this issue is agreed upon by the scholars. However, the one who leaves it is, undoubtedly, contradicting the Sunnah of the Prophet

The Sermon after the Prayer:

It is from the prophetic Sunnah that the ‘Eed sermon should follow the ‘Eed prayer. Imam Al-Bukhari

named one of the chapters of his Book: "The Chapter of the Sermon After the ‘Eed Prayer." Ibn ‘Abbas

said: “I offered the ‘Eed prayer with Allah’s Messenger

as well as Abu Bakr, ‘Umar, and ‘Uthman, and all of them, may Allah pleased with them, offered the ‘Eed prayer before delivering its Khutbah (religious sermon).”

used to offer the ('Eed) prayers before delivering its khutbah.” 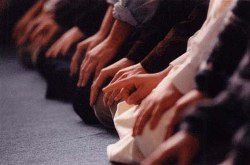 The Prayer Has Never Been this Hard Libraries are like studios. No sound goes unheard. No noise passes without someone looking up or, in this case, a librarian hissing and excitedly shushing the disturber...More