Etiquette of eating and drinking 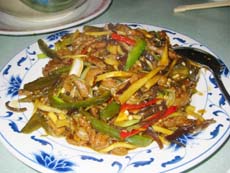 For every act that a Muslim does, there is a chance for him to earn some reward for it from Allah. From praying to per­forming Ghusl (ritual bath), O Allah has placed His Blessings in everything. These rewards and blessings can be attained only by those keen to follow the guidance and example of the Prophet Muhammad

into every aspect of their lives, thereby seeking nothing but the pleasure of their Creator.

The entire life of such people becomes an act of worship. Even the act of eating and drinking, upon which all living things depend, can become acts of worship. Thus, by acquainting ourselves with the Sunnah (the tradition of the Prophet

) of eating and drinking, we too can turn this mundane exercise into an act of worship and a source of blessing.
The etiquette of eating
1- How to begin
When a Muslim begins to eat, he should begin with the name of Allah. As the Prophet Muhammad

explained that Shaytan (Satan) partakes in the food if the name of Allah is not mentioned at the start of eating. However, if one forgets in the beginning and then remembers and says the aforementioned Du'aa (supplication), Shaytan is made to vomit out what he had eaten.
2- The manners of eating
The best manner in which to eat food is with the fingers of the right hand. The Companion, Ka'ab bin Malik

reported that he saw the Messenger

eating with three fingers and when he finished, he would lick them. Another manner of eating which the Prophet

taught us is that we should always eat from what is near­est to us and not from the middle of the plate. The reason for this is that the blessings come down upon the food in its mid­dle, therefore it should be left to last. [Abu Dawood, eng. Trans. Vol. 3, p. 1064, no. 3763]
3- The manners of sitting while sating.
The Prophet

would never eat while in a reclining position. Eating while reclining was a manner used to show arrogance, as traditionally associated with the Greeks and Romans.
The whole life of the Prophet

was a model of modesty and humility and this was evident in his manner of eating. The Companion Anas

reported that he saw Allah’s Messenger

squatting and eating dates [Muslim]. At other times, the Prophet

would sit on his knees as reported by ‘Abdullah bin Busr

who said that: "The Prophet

was sitting on his knees upon which a bedouin asked: ‘Why are you sitting like this?’ The Prophet

replied: “Allah has made me a respectable servant and He did not make me an obstinate tyrant.”
4- Do not criticize food:
Abu Hurayrah

never found fault with food. If he liked it, he would eat it, but if he disliked it, he just left it.
These are the manners our Prophet

who we are enjoined to emulate, who was the best example for mankind. If we look at the manners of people nowadays, we will see that people are quick to criticize food. It is a sign of extreme ingratitude to Allah, the Provider. Rather, one should be thankful to Allah for whatever He has provided us with and not complain about its taste. One should also remind oneself that there are many people who do not know where their next meal is coming from. So we should instead be grateful as instructed by Allah (what means): "O you who believe, eat of the good (lawful) things We have provided you with, and be grateful to Allah, if it is (indeed) He whom you worship."[Quran 2:172]
5- Do not eat too much

In today’s times, many people follow a lifestyle in which they over indulge in food. They eat large quantities until it is difficult for them to breathe and they can almost feel the food rising to their throats. We have been taught by the Prophet

that we should do all things in moderation, including eating. The Prophet

said: “A Believer eats in one intestine, whereas a non-believer eats in seven intestines”[Muslim]
Therefore, we should not eat until we are completely satiated; rather we should eat an amount of food that eliminates the hunger and does not satisfy us to our fullest.
6- After eating
When we have finished eating, we should always remember Allah and be grateful to Him, for He is the Provider and our Sustainer. We should express this gratitude in the manner in which the Prophet

said: “One who has eaten some food and then says: ‘All praise is for Allah, who has given me this (food to eat) and provided for me without any effort or power on my part’, he will have his sins forgiven.” [At-Tirmithi]
We can extract most of the etiquettes of eating from the following Hadeeth: Narrated ‘Umar bin Abi Salamah

: “I was a boy under the care of Allah’s Messenger

and my hand used to go around the dish while I was eating. So Allah’s Messenger

said to me: ‘O young boy! Mention the name of Allah, eat with your right hand and eat of the dish what is nearer to you.” [Al-Bukhari]
Etiquette of drinking dater
Water should be drunk in three breaths, that is one should breathe three times outside the drinking vessel one is drinking from. This habit has a salutary impact on one's character and helps one avoid doing things in haste.
Anas

reported: The Messenger of Allah

used to breathe three times in the course of a drink (he used to drink in three gulps).
The Messenger of Allah

also prohibited us from breathing in the drinking vessel because the bad smell or spittle may flow into the drink. This is both vile as well as injurious to one's health. Abu Qatadah

forbade breathing into the vessel while drinking."
To sum up the etiquette of drinking:
1.   Never drink straight from a bottle (carbon dioxide is released in the bottle).
2.   Do not drink from the mug's cleft and do not breathe in the beverage.
3.   Drink in three draughts.
4.   Invoke Allah when you drink and praise him when you finish.
It is reported that the Prophet

said: "Do not drink the water in one draught just like camels, but drink it in one or three gulps, and invoke Allah when you drink and praise Him when you finish."

Everything, when lost, can be regained, except time. If it is lost, there is no hope to regain it. That is why time is the most precious thing that can ever be possessed in this life. Islam is a religion...More