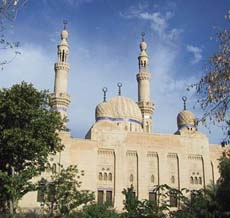 was born in Baghdad, in the year 780 CE. Of pure Arab lineage, Ibn Hanbal

belonged to the tribe of Shaybaan through both parents. He was still an infant when his father died at the age of 30. When Ibn Hanbal

was fifteen, he began to study the Traditions (Ahadeeth) of the Prophet Muhammad,

, (may Allah exalt his mention). Seeking to learn from the great scholars of his day, he traveled to the cities of Koofah and Basrah in Iraq; Makkah, Hijaaz and Al-Madeenah in Arabia; and to the lands of Yemen and Syria. He made five pilgrimages to Makkah, three of which were on foot. Ibn Hanbal

led a life of asceticism and humility, acquiring many students. He had eight children, of whom two were well known and closely associated with his intellectual work: Saalih (died 880 CE) and ‘Abdullaah (died 903 CE).

said: “I left Baghdad and did not leave there any man more knowledgeable than Ibn Hanbal.”
His Ordeal:
The most talked about issue of Ibn Hanbal's life is the suffering to which he was subjected during the trial, known as “al-mihnah”, ordered by the Caliph Al-Ma’moon. The tribulation began in 833 CE, when the Caliph made obligatory upon all Muslims the belief that the Quran was created --a doctrine of the Mu’tazilites, a rationalist Islamic school that claimed that reason was equal to revelation as a means to religious truth. The Caliph had already made public profession of this belief in 827 CE. Before this time, the Glorious Quran had been regarded as the uncreated, eternal word of Allah. The inquisition was conducted in Baghdad, central location of the ‘Abbaasid Caliphate, as well as in the provinces. It lasted from 833 to 848 CE, a period involving the reign of four Caliphs, ending during the Caliphate of al-Mutawakkil, who returned people to the correct view.
At the risk of his life, Ibn Hanbal

refused to subscribe to the Mu’tazilee doctrine. He was put in chains, beaten and imprisoned for more than two years. After his release, he did not resume his lectures until the inquisition was publicly proclaimed at an end. In order to survive the ordeal, some scholars had recanted, and later claimed the privilege of dissimulation, Taqiyyah (hiding their feelings because of the extreme danger involved), as a justification for their behavior. Other scholars, following the example of Ibn Hanbal

refused to renounce their beliefs.
In 833 CE, Ibn Hanbal

and another scholar, Muhammad bin Nooh, may Allah have mercy on him, who had also refused to recant, were cited to appear for trial before Caliph al-Ma’moon, who was in Tarsus (now in modern Turkey) at the time. They were sent off in chains from Baghdad; but shortly after beginning their journey, the Caliph died and on their trip back to the capital, Ibn Nooh died as well.
Ibn Hanbal

was ordered to appear before the new Caliph, al-Mu’tasim. He was on trial for three days, and on the third day after the learned men disputed with him, there followed a private conference with the Caliph who asked Ibn Hanbal

to yield at least a little so that he might grant him his freedom. Ibn Hanbal

made the same reply he had been making from the beginning of the inquisition; he would yield when given some proof for modifying his faith derived from the Quran and the Traditions of Prophet Muhammad,

. Losing patience, the Caliph ordered that he be taken away and lashed. Throughout the lashing, the Caliph persisted in his attempts to obtain a recantation, but to no avail. Ibn Hanbal's unflinching spirit affected the Caliph, but his advisers warned that if he discontinued the punishment, he would be accused of having opposed the doctrine of his predecessor al-Ma’moon, and it would be counted as a victory for Ibn Hanbal

resulting in dire consequences on the reign of the caliphs. Nevertheless, the Caliph's treatment of Ibn Hanbal

had to be suspended, because of the mounting anger of the populace gathering outside the palace and preparing to attack it. Ibn Hanbal

is reported to have been beaten by 150 lashers, each in turn striking him twice and moving aside. The scars from his wounds remained with him to the end of his life.
The inquisition continued under the next Caliph, al-Waathiq, but Ibn Hanbal was left alone, in spite of attempts on the part of his opponents to persuade the Caliph to persecute him. The new Caliph, like his predecessor, was most likely influenced by the threat of a popular uprising should he lay violent hands on a man popularly held to be a great scholar and the most knowledgeable person of his time. The momentum of the inquisition carried it two years into the reign of Caliph al-Mutawakkil, who finally put an end to it in 848 CE.
Ibn Hanbal

earned the greatest reputation of all the persons involved in the inquisition and the everlasting gratitude of the Muslim people. He is credited with having held his ground in the face of all odds, saving Muslims from becoming unbelievers. Ibn Hanbal’s record in history is that of a great scholar who stood firm in the face of the Mu’tazilites’ heresies, and their campaign to alter Allah’s religion.
His Death:
Ibn Hanbal

died in 855 CE, in Baghdad. He was then 77 years old. People attending his funeral ceremony flooded the streets of Baghdad and the procession was estimated at more than 800,000 mourners.