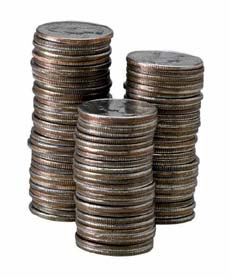 When is the   Payment Due

state that the Zakatul-Fitr payment becomes obligatory after sunset on 'Eed's eve, or the last day of fasting, because this is the end of Ramadan. Abu Haneefah

commanded his Companions, may Allah be pleased with them, to pay Zakatul-Fitr before going out to perform the prayer of 'Eed [Al-Bukhari and Muslim]. (Therefore, if one has a newborn before the dawn of 'Eed, or one dies after the sunset of the final day of fasting, his or her Zakatul-Fitr must be paid, according to Abu Haneefah

Also, according to Abu Haneefah

it is possible to pay Zakatul-Fitr in Ramadan in advance of Zakatul-Fitr, or even just prior to the commencement of Ramadan. Ash-Shaafi'ee

however, holds that Zakatul-Fitr can be given on the first day of fasting Ramadan. Imaams Maalik and Ahmad

state that its payment becomes obligatory after the sunset of the last day of Ramadan, but can be paid one or two days earlier.

Where Should Zakatul-Fitr Be Paid?

In general, the best place for the collection and distribution of one's Zakah and charity—and this includes Zakatul-Fitr—is one's locality or community, be it in one's city, state, or country. This is strongly implied in the statement of the Prophet

in sending the famed Companion Mu'aath Ibn Jabal, may Allah be pleased with him, to teach the people of . He said to him, "Inform them that Allah has made the paying of Zakah obligatory on them. Take it from their rich and give it to their poor."

There are provisions for transferring Zakah resources to other communities among Muslims; however, special guidelines for doing so have been established by Muslim scholars in accordance with Islamic legislation, to which the institutions responsible for the collection and distribution of Zakah among Muslims are to adhere.

The reemergence of Muslim concern for the paying and collection of all Zakah resources and charities—especially Zakatul-Fitr —is an auspicious sign, indeed, for the Muslim community. Zakah has increasingly taken a central place in contemporary Muslim discourse, as its dynamic (almost miraculous) possibilities are again being realized by Muslims. At least seven conferences on this topic have taken place in (and others in , , , and ) in recent decades. Their focuses have been diverse. A good summary of their scholarly recommendations concerning Zakatul-Fitr, however, is represented in the Sixth International Conference on Contemporary Zakah Issues held in in 1997. They are summed up herein to augment this look at one of the most blessed and pleasing expressions of our worship, to which Allah alone has guided us. And all goodness and truth is from Him alone.

Summary of the Recommendations of the Sixth International Conference on Contemporary Zakah Issues(, 1997)

1. Zakatul-Fitr is obligatory upon every Muslim who has the food or provision to sustain himself, and those whom he is obligated to support, on the eve and the day of 'Eed, provided that this exceeds his basic needs.

2. A man is obliged to pay Zakatul-Fitr for his wife and minor children who have no money of their own. In the case of one who has independent children, one is not obliged for their payment.

3. What is obligatory is the giving of a Saa' (four handfuls) of dates, barley, raisins, or other such grain, equal to approximately 2.25 kilograms of wheat. Originally, the giving of Zakatul-Fitr was limited to the kinds of food that had been stated in the relevant statement of the Prophet

. However, jurists have established (through proper methods) that it may be given out of other commonly consumed foods, such as rice, meat, milk and so forth, but should be valued in accordance with the items specified by the Prophet

. Moreover, it is permissible to give Zakatul-Fitr in currency by paying the equivalent value of what is obligated. Those Muslim Institutions entrusted with its collection and distribution are required to assess the value of the originally specified items in their areas, and to disseminate that information in their communities, accordingly.

4. Zakatul-Fitr must be given before the prayer of 'Eed. It is forbidden to delay it until after the 'Eed day. If one, for any reason, is prevented from giving it at that particular time, one must pay it after that time passes. If there is a need, Zakatul-Fitr may be given at any time from the beginning of the month of Ramadan that is, its first day—until the end of the specified time [of 'Eed day].

5. It is permissible for one to delegate another to give Zakatul-Fitr on one's behalf.

6. It is permissible for the institutions that collect Zakatul-Fitr to exchange it from goods to currency, and vice versa, based on the general interest of the community.

7. It is permissible, in special cases, to transfer Zakatul-Fitr collections from the people or locality in which it was collected to nearby communities in more need. And it is equally permissible to spend Zakatul-Fitr in another community, if the giving community has no one in need of it.

8. One must have a clear intention before giving one's Zakatul-Fitr. If one delegates, or gives permission, to another to give Zakatul-Fitr on his behalf, it is considered an explicit intention.

9. If the community decides, after due process of consultation among its leadership and scholars, to delay the spending of what it has collected from Zakatul-Fitr payments until after the day of 'Eed, then this may be done, provided that it serves a clear benefit for the community.