Al-Bukhari: the master in the science of Prophetic narrations 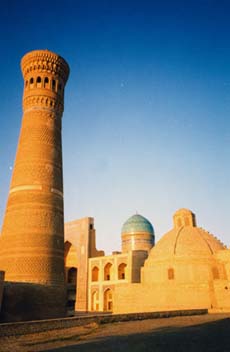 His mother woke up with a start and said happily: "What a pleasant dream! Allah’s messenger Ibraaheem, may Allah exalt his mention, appeared in my dream, and said: "O woman! Allah restored your son’s eye sight because of your frequent supplications". She said: "O Allah, make it a glad tiding. "O Allah answer my supplications and restore the sight of my child."

The pious mother walked to her son’s room, hardly able to move her feet. When she reached his bed, she was about to wake him up but she hesitated. Her broken heart was beating and she kept tenderly and kindly caressing his head with her shaky hands. She was still supplicating and hoping that Allah would answer her frequent supplications and cure her son. The young boy woke up and started looking in amazement and moving his eyelids in confusion. He said in a breaking voice:

One day, when the mother was tidying up the house in the morning, she came across a few papers containing some narrations of the Prophet

. She remembered her beloved husband and said sadly and painfully while wiping the tears off her cheeks: "May Allah have mercy on you, Muhammad’s father. You were a man who used to fear Allah. You dreamed for a long time that your son Muhammad would be a religious scholar! I promise you that I will do my best to achieve your dear wish, Allah willing." Then she called her son kindly, and Muhammad hurried to her obediently. Then, she said to him: "It is time for you, my son to seek religious knowledge and benefit yourself and the people around you. Tomorrow I will send you to a small school where you can memorize the Quran, learn Prophetic narrations and study the Arabic language to become an honourable scholar like your father, Ismaa'eel, may Allah have mercy on him.

The young boy, Muhammad, said cleverly: "Mother! Was my father an eminent scholar?"

The mother replied: "Yes, my son." Mohammad, then said politely: "I promise you, Mother, that I will follow his footsteps seriously and exert all my efforts."

The city of (now in Islamic Uzbekistan) was located at that time in one of the greatest countries beyond the Transoxus (now ). Schools of knowledge where people could learn Arabic, the Quran, history, and Fiqh (Islamic jurisprudence) were spread throughout the city. The young boy, Muhammad Ibn Ismaa’eel Al-Bukhari, may Allah have mercy on them, then set out to quench his thirst for knowledge from these sweet springs. Early in his life, he showed signs of intelligence that surprised everyone around him. He had a sharp mind, an attentive heart, an amazing memory, and an incredible ability to memorize. Before he was ten, he had memorized the whole Quran, mastered the Arabic language, covered much of the Fiqh, and memorized many Prophetic narrations. His pious good mother always encouraged her son and prepared a suitable atmosphere for him to acquire knowledge. When Al-Bukhari, may Allah have mercy on him, finished his studies in the small schools, his wise mother thought to send him to the well-known study circles in Bukhaaraa, Samarqand, Bekend, Marw, and Nesabor. He became famous among the scholars to the point that he used to argue with his professors and even corrected them sometimes!!

The success and physiognomy of Al-Bukhari, may Allah have mercy on him, didn't end there. His shaykh and teacher Mohammad  Ibn Salaam Al-Bekandy, may Allah have mercy on him, the scholar of Buhaaraa and the scholar of Prophetic narrations across the Transoxus (now ), used to ask him to revise some of his books and corrected any mistakes he found. Scholars used to wonder in astonishment: "Who was that boy who edits the books of his professor?!"

Imaam Bekandi, may Allah have mercy on him, used to say proudly about his clever student: "This boy is unique of his kind."

On many occasions Imaam Bekandi, may Allah have mercy on him, talked to his colleagues about his student, Al-Bukhari, may Allah have mercy on him, who memorized seventy thousand Prophetic narrations by heart. In addition to this, he never reported a narration of the companions, may Allah be pleased with them, or the generation following them unless he knew when and where they were born, as well as where they lived and died!

The years passed and Mohammad Ibn Ismaa'eel, may Allah be pleased with him, reached the age of sixteen years. He felt a great need to go and seek knowledge in every corner of the world to satisfy his thirst for knowledge. He headed to Makkah, accompanied by his mother and elder brother, Ahmad, in 210 AH to perform Hajj (pilgrimage) and seek more knowledge. After the pilgrimage, his mother and brother Ahmad returned to Bukhaaraa while he stayed in Makkah to move between its domes of knowledge: East, and west; North and South. Before the end of two years in this sacred city, he started writing his book The Issues of the companions, may Allah be pleased with them, and their Followers which marked the beginning of his renowned books.

* Al-Bukhari, may Allah have mercy on him, always loved to visit Madeenah. Among the fruits of his visits to that blessed place was writing his book: "The Big Book of History" which is considered the first book that comprises the names of the narrators of Prophetic narrations and the details of their lives. From that wonderful sacred spot, Al-Bukhari, may Allah have mercy on him, set out on a relentless endeavor to visit all the Islamic territories out of his love for compiling the Prophetic narrations. He traveled to Hijaaz (), Levant (, , and ), , and Khurasaan (a vast area between north east , southern , and western ). He visited Basrah and settled for some time in which was the capital of the Abbasid state at that time. He greatly benefited from these journeys seeking knowledge. He had the pleasure of meeting most the narrators of Prophetic narrations at that time, sat with them, listened to the narrations, and memorized whatever knowledge they had.

One night, Al-Bukhari, may Allah have mercy on him, had a strange dream that later had a great impact on his life. He saw himself standing before the Prophet

. He was so confused and surprised that he went to his scholars, may Allah have mercy on them, asking them to interpret his dream. They said happily: "You will clear the lies and false claims away from the Prophet

." Al-Bukhari, may Allah have mercy on him, then remembered his teacher, shaykh Is-Haaq Ibn Raahawayh, the prominent scholar of Khurasaan, when he told his students once: "It would be great if you can compile a concise and brief book containing the authentic narrations of the Prophet

These words echoed in Al-Bukhari’s heart and he remembered that dream which was always in his mind since he started learning the Prophetic narrations. Thereupon, he immediately made an intention to actively and seriously pursue this mission and started to strive in his long journey of writing this great book in 217 AH when he was twenty three.

Because of that dream, Al-Bukhari, may Allah have mercy on him, traveled thousands of miles moving from one Islamic territory to another, undergoing all sorts of difficulties, hardships, and weariness, sometimes to obtain only one narration of the Prophet

. He sometimes even had to eat grass to satisfy his extreme hunger after he had spent all his money. Even the few hours of night in which he snatched short naps to rest a while, were not so resting for him, as he used to wake up fifteen to twenty times a night to lit his lamp and sit to classify the narrations he had collected. Al-Bukhari, may Allah have mercy on him, made a pact with himself that he wouldn’t include a narration from any narrator until he had personally met him, and listened to the narration with his own ears. He never accepted narrations except from the ones who were known for being honest, diligent, accurate, fearing Allah, and having a sharp memory. After this process, he would have a ritual bath; pray two Rak'as and then include only the narration that had met all these conditions in his book.

his Tradition and Life" to become the title of the most authentic book after the Quran. The book is known as 'Saheeh Al-Bukhari' (The authentic narrations reported by Al-Bukhari, may Allah have mercy on him). This book became well known and it gave him a high rank that someone like him truly deserved to achieve. He, may Allah be pleased with him, had a vast knowledge, great manners, a tolerant nature, dignity, and an untainted tongue. He cared so little for this life, he had deep faith, and had Allah's consciousness at all times. After Imaam Al-Bukhari, may Allah have mercy on him, became famous throughout the world, thousands of scholars came to him as students of the leader in memorization of authentic narrations until the number of people who attended his study circles in Baghdad reached 20,000. Among the most remarkable figures of his students were Imaams At-Tirmithi, An-Nasaa'ee, Muslim, and others, may Allah have mercy on them.

In 250 AH, Al-Bukhari, may Allah have mercy on him, left to Nisabor, a city in Khurasaan and stayed there for a while teaching the people. Then he decided to return to his dear city, Bukhaaraa, and when he did the people rushed to welcome him in a great celebration in which huge tents were pitched and decorations were hung. They threw flowers and golden and silver coins on the Imaam upon his arrival into the city. There was an overwhelming atmosphere of happiness that prevailed throughout all Bukhaaraa.

Allah Willed, out of mercy to the Imaam, that Al-Bukhari, may Allah have mercy on him, would only meet his Lord after peace and happiness had found their way into his heart again. One day, the people of Samarqand sent a message for him asking him to come. He agreed and packed with great joy. When he started walking towards his animal he said: “Take me back, I have become weak and very ill”. When they took him back to his house, he said some supplications then he laid on his bed sweating a lot, then his pure soul ascended to its Creator. His death, may Allah have mercy on him, was on a Friday night, the beginning of the month of Shawwaal, 256 AH (870 AD). He was sixty-two years old when he died. He was buried in the village of Khartank which is now known as 'Khawaajah Saaheb'. May Allah have mercy upon the great Imaam and may Allah admit him into Paradise. Aameen.