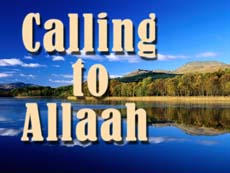 Calling to Allah is the way of the Messenger Muhammad sallallaahu 'alayhi wa sallam, and his followers, as Allah the Exalted, Says (what means): "Say [O Muhammad]: 'This is my way; I invite to Allah...More