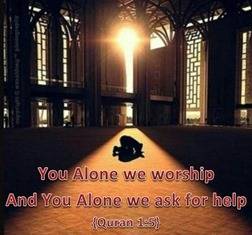 Gratitude is the greatest way to live for those who possess high ranks of righteousness, and such people did not reach these lofty ranks except through their gratitude; this is because belief is comprised of two halves; one half is gratitude and the other is perseverance.

Gratitude is to acknowledge being treated well by Allah; it is also to praise the One who has done one many favors. It also entails displaying the effect of the favors of Allah upon a person by believing with one's heart, uttering praise and glorifications of Allah by ones tongue, and to use one's limbs in the worship and obedience of Allah. If only a few favors are worthy of a great deal of gratitude, how would the case be when favors are abundant? People are either grateful or ungrateful.
Gratitude holds a high rank in Islam:
·        Allah parallels it with His mention. He Says (what means): “So remember Me; I will remember you. And be grateful to Me and do not deny Me”. [Quran 2: 152]
·        Allah parallels it with belief. He Says (what means): “What would Allah do with [i.e., gain from] your punishment if you are grateful and believe?...” [Quran 4: 147] Meaning, if you fulfil the rights due to Allah and the reason for which He has created you by gratitude and belief, He will not punish you.
·        Those who practice gratitude to Allah are those who are chosen to be granted His favors. He Says (what means): “And thus We have tried some of them through others that they [i.e., the disbelievers] might say, 'Is it these whom Allah has favored among us?' Is not Allah most knowing of those who are grateful?” [Quran 6: 53]
·        Allah has classified people into being either grateful or ungrateful; the worst matter in the scale of Allah is ingratitude whilst the dearest things to Him are gratitude and the grateful. Allah Says (what means): “Indeed, We guided him [i.e., man] to the way, be he grateful or ungrateful” [Quran 76: 3]
·        Allah tests His slaves in order to see who will practice gratitude and who will not. Allah informs us about what Prophet Sulayman

said when He Says (what means): “…This is from the favor of my Lord to test me whether I will be grateful or ungrateful. And whoever is grateful – his gratitude is only for [the benefit of] himself. And whoever is ungrateful – then indeed my Lord is Free of need and Generous.” [Quran 27: 40]
·        Allah promises increased favors for those who are grateful. He Says (what means): “And [remember] when your Lord proclaimed, 'If you are grateful, I will surely increase you [in favor]; but if you deny, indeed My punishment is severe.'” [Quran 14: 7]
·        Allah loves gratitude and the deeds of the grateful. He Says (what means): “If you disbelieve – indeed, Allah is Free from need of you. And He does not approve for His servants disbelief. And if you are grateful, He approves [i.e., likes] it for you…” [Quran 39: 7] The grateful people mentioned in the verse are those who remain steadfast upon belief during trials and who do not retreat or recant on their belief. Some people verbally thank Allah during times of ease, but during trials they give up their faith. The truly grateful are those who express the true condition of their hearts during trials by remaining steadfast and continuing to thank Allah by their tongues, hearts and limbs. Additionally, this verse clarifies that the pleasure of Allah is achieved by being grateful to Him.
·        Allah did not make the reward for the grateful subject to any condition, as He did for other acts of worship, which He conditioned to His will; rather, Allah immediately mentions their reward; He Says (what means): “…And Allah will reward the grateful.” [Quran 3: 144] and also (what means): “…And We will reward the grateful.” [Quran 3: 145]
·        Allah informs us that one of Satan’s primary objectives is to prevent humans from being grateful; He Says (what means): “[Satan said] 'Then I will come to them from before them and from behind them and on their right and on their left, and You [i.e., Allah] will not find most of them grateful [to You].” [Quran 7: 17]
·        Allah describes His grateful slaves to be few in number; He Says (what means): “…And few of My servants are grateful.” [Quran 34: 13]The reason being that many people enjoy blessings and bounties from Allah, but fail to practice gratitude to Allah.
·        Allah praised the first prophet sent to man on earth, Prophet Nooh

due to him being grateful. Allah Says (what means): “O descendants of those We carried [in the ship] with Noah. Indeed, he was a grateful servant.” [Quran 17: 3]This is as an indication that we should imitate him

.
·        Gratitude is the first instruction given to man as soon as he begins to comprehend. Allah Says (what means): “And We have enjoined upon man [care] for his parents. His mother carried him, [increasing her] in weakness upon weakness, and his weaning is in two years. Be grateful to Me and to your parents; to Me is the [final] destination.” [Quran 31: 14]
·        Allah specified it as one of the main qualities of a person who sets himself as a good example for others to follow. He says regarding prophet Ibraheem

(what means): “Indeed, Ibraheem was a [comprehensive] leader, devoutly obedient to Allah, inclining toward truth, and he was not of those who associate others with Allah. [He was] grateful for His favors. He [i.e., Allah] chose him and guided him to a straight path.” [Quran 16: 120-121]
Therefore, gratitude is one of the objectives that man is commanded to accomplish.
Imam ibn Al-Qayyim

mentioned that gratitude is one of the ranks of belief, which can be extracted from the fifth verse of Soorah Al-Fatihah, (what means): “It is You we worship and You we ask for help.” Then he

mentioned the following additional points regarding gratitude:
·        It is one of the highest ranks of belief.
·        It is higher than the rank of contentment; and nobody can be content without being grateful.
·        Allah praises the grateful.
·        Allah promises the grateful the best of rewards.
·        Allah makes gratitude a reason for attaining more of His bounties.
·        It is a means to preserve the favors of Allah upon a person.
·        It is one of the main objectives that a slave must accomplish.
·        It is extracted from Ash-Skakoor, which is one of the Names of Allah, and which implies gratitude.
·        Those who are grateful are very few in number.
·        Gratitude results in more favors from Allah.
Gratitude is having ones heart devoted to loving the One bestowing the favors, having the limbs continuously obedient to Him and having the tongue repeatedly mentioning Him, praising Him and glorifying Him. Gratitude entails the following three things:
1.     One should realise the favors bestowed upon him and have it present in his mind constantly, because this leads him to remember the Bestower of favors and therefore being grateful to and loving Allah, who is of course the Bestower of favors. This would therefore make one exert more effort in worshipping Allah.
2.     One should receive favors with humility and express his need to Allah, the Bestower of favors, and mention that he is unworthy of the favors bestowed upon him, and that it is only due to the Grace and Kindness of Allah that such favors were bestowed.
3.     One should praise Allah, the Bestower of favors, and this is done in two ways:
1)    Generally: To describe Allah as being generous and kind.
2)    Specifically: To mention His favors upon one.
There are two points regarding the issue of mentioning and talking about favors from Allah:
1)    To mention all that Allah Has bestowed upon one.
2)    To utilise these favors in His obedience.
People fall into three categories with regards to the favors from Allah:
1.     Those who are grateful and praise Allah for bestowing them upon them.
2.     Those who are ungrateful and do not mention them.
3.     Those who express that they are worthy of them, when in fact they certainly are not.
An-Nu’man ibn Al-Basheer

said: “He who does not thank Allah for small favors will not thank Him for great ones; and he who does not express gratitude to people (for doing him favors) will not express gratitude towards Allah. Appreciating and mentioning the favor bestowed upon one from Allah is gratitude, and not doing so expresses ingratitude.” [Ahmad]
This should be done in front of people and between a person and himself (i.e., to himself) but if people are of the envious type, then one should conceal such favors, and he would not be ungrateful in this case, because he is simply concealing them in an attempt to prevent an evil from befalling him, such as an evil eye or an evil plot from the envious, and it must be known that to prevent harm from afflicting man is an objective set forth by the Islamic Sharee’ah.
There is no way one can do anything to repay the favors bestowed upon him by Allah, except that he should continue to praise and thank Allah for having bestowed them upon him, as well as utilising these favors for the pleasure of Allah.
What is our duty towards Allah with regards to the favors He bestows upon us?
·        Being submissive to Allah.
·        Loving Allah.
·        Acknowledging that He is the Bestower of all favors.
·        Praising Him.
·        Utilising these favors in a way that pleases Him.
Does the way of expressing gratitude towards Allah differ, just like the favors themselves differ?
Yes; gratitude can be expressed by the heart, the tongue and the limbs.
Expressing gratitude by the heart:This is by knowing that Allah is the Bestower of these favors, and this is something that is very important when cultivating children, so that they know where favors come from, as Allah Says (what means): “O Mankind, remember the favor of Allah upon you. Is there any creator other than Allah who provides for you from the heaven and the earth? There is no deity except Him, so how are you deluded?” [Quran 35: 3]
Gratitude - II