Recipes from the Muslim world

Food and the way it is prepared reflect the taste and the cultural make up of society. This article features a number of food recipes from different Muslim countries.

The dietary of the Muslim World includes a variety of dishes that, typically, are rich taste and nutrition. It is uncommon that in one dish one may find most of the nutrition one needs proteins, carbohydrates, vitamins, and minerals. The abundance of that variation is a direct result of the variations in Muslims geographic and ethnic back-ground. Each group has its way of preparing food,-but as time went by, they got closer to each other, they learned new ideas, and used new spices from each other. This made the variations countless. But the significance of Islamic dietary lies in the fact is that it is lawful according to the Islamic Sharyah. This means that it contains no alcohol, pork or any prohibited substances. And because Islam prohibited only things that are known and proven to be harmful to people, the food is harmless to the mind, and body.
A generation ago, it was very rare that some one living in Africa would know what some one living in Asia is cooking. Not any more! Today here in America one has a chance to try out dishes form all around the world. For us as a Muslim community, the chance we have is even better, because we live in communities that are mixed from all back-grounds. Just look at the time of certain occasions at the masajid like the day of Eed, Aqiqa or the month of Ramadan. Specially during the blessed days and nights of the month of Ramadan like those we are experiencing at this time—whether we are inviting some Muslims for Iftar or just want to try other Islamic cuisine—we should try to learn about new ways of cooking not by using cookbooks but by talking to others and learning from them. This should be easy to do for during this month food variation becomes more noticeable than ever. The number of ethnic dishes typically seen in Ramadan, in any average masjid, can exceed a hundred easily. What an opportunity to learn about food and health. Here are some dishes from different Muslim countries. Enjoy trying them and share some with others. 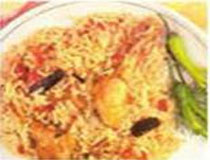