Establish the prayers and the prize is Paradise 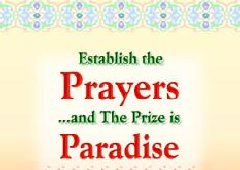 Allah Almighty Says  (what means): "And when you have completed the prayer, remember Allah standing, sitting, or [lying] on your sides. But when you become secure, re-establish [regular] prayer. Indeed, prayer has been decreed upon the believers a decree of specified times." [Quran 4:103]

was to be found in the mosque before the Athaan (call to prayer) was made. `Umar, may Allah be pleased with him, became unconscious after he was stabbed, and according to Al-Miswar Ibn Makhramah

it was said: "Nothing would wake him up except the call to prayer, if he is still alive." So people said to him: "The prayer has finished, O Chief of the Believers!" He therefore awoke and said: "The prayer! I swear by Allah that there is no share of Islam for whoever abandons the prayer." He then performed the prayer while his wound was bleeding.
After Ar-Rabee` Ibn Khaytham

became partially paralysed, he would go to the mosque helped by two men. He was told: "O Abu Yazeed! You have been given permission to pray at home." He replied: "You have said the truth, but I heard the caller say: 'Hayya `ala al-falah' (rush to success), and so I thought that whoever hears this call should answer it, even by crawling."
'Uday Ibn Haatim, may Allah be pleased with him, said: "Every time the time for prayer arrives, it finds me eager and ready to perform it (i.e. in the state of ablution)."
Abu Bakr Ibn 'Abdullaah Al-Muzani

said: "Who is like you, O son of Aadam? Whenever you desire, you use water and make ablution, go to the place of worship and thus enter the presence of your Lord (i.e. start praying) without a translator or barrier between you and Him!"
Abu Rajaa' Al-`Ataaridi

said on his deathbed: "I am not grieved by leaving anything behind, except that I used to bow down on my face five times a day before my Lord, the Exalted and most Honoured."
Abul-'Aaliyah

said: "I would travel for days to meet a man and the first thing I would note about him would be his prayer. If he was one who established the prayer perfectly and on time, I would stay with him and hear the knowledge he had to impart. If I found him to be careless concerning the prayer, I would leave him and say to myself that for things other than the prayer, he would be even more careless."
When 'Ali Ibn Al-Husayn

would perform ablution, the colour of his face would change. His family asked him why this would always happen and he would reply: "Do you know before Whom I am about to stand (in prayer)?"
Yazeed Ibn 'Abdullaah

was asked: "Should we make a roof for our mosque?" He replied: "Purify your hearts and your mosque (in its current state) will suffice you."
'Uday Ibn Haatim, may Allah be pleased with him, said: "Ever since I became a Muslim, I always made sure to have ablution when the Athaan is called."
'Ubayd Ibn Ja`far

said: "I never saw my uncle Bishr Ibn Mansoor miss the first Takbeer (that commences the congregational prayer in the mosque), and whenever any person stood up in our mosque to ask people for help, he would always give him something."
Ibn Sam`ah

said: "For forty years, I only missed the first Takbeer once, and that was when my mother died. If you know of a man's disinterest in being present in the mosque for the first Takbeer, then wash your hands of him (i.e. know that there is no good in him)."
Sufyaan Ibn `Uyaynah

said: "Honouring the prayer includes arriving before the Iqaamah (the call that establishes the prayer) is called."
Maymoon Ibn Mahraan

was once delayed from coming to the mosque on time. When he did eventually arrive, he was told that the people had already concluded the prayer: "We all belong to Allah and to Him shall be our return! I value the congregational prayer more than being made governor of Iraq," he lamented.
Yoonus Ibn 'Abdullaah

said: "What is the matter with me? If I lose a mere chicken I feel concerned, but when I miss a prayer in congregation it does not grieve me!"
`Umar, may Allah be pleased with him, once said while standing on the pulpit: "A man may have white hair in Islam (i.e. reach old age while being Muslim), but has not yet completed even a single prayer for Allah the Exalted!" He was asked: "Why is that?" He replied: "Because he does not perfect the prayer's required Khushoo` (solemness) and fails to be attentive to Allah with his heart."
Hammaad Ibn Salamah

said: "I have never stood up for prayer without imagining that the Hellfire is before my eyes."
Mu`aath Ibn Jabal, may Allah be pleased with him, advised his son saying: "My son! Pray the prayer of he who is just about to leave this world, and imagine that you may never be able to pray again. Know that the believer dies between two good deeds: one that he has just performed, and the other that he intended to perform next."
Bakr Al-Muzani

said: "If you want your prayer to be of benefit to you then say to yourself prior to it that you may not have the chance to perform another prayer.'"
Shubrumah

said: "We once accompanied Qarz Al-Harithi on a journey; whenever we would camp down in an area, he would scan it with his eyes and when he found a good piece of land that he liked, he would go to it and pray there until it was time for us to leave."
Al-Qaasim Ibn Muhammad

said: "Whenever I went out in the morning, I would visit (my aunt) `Aa'ishah, may Allah be pleased with her, and greet her. One day, I found her performing the Al-Dhuha prayer (two unit of supererogatory prayer performs in between sunrise and forenoon) while crying and invoking Allah by reciting one verse from the Quran repeatedly. The verse of the Quran was (which means): "So Allah conferred favour upon us and protected us from the punishment of the Scorching Fire." [Quran 52:27] I stood there until I felt weary, then I left and went to the marketplace, telling myself that I would return to her when I finish. Later, when I did return to her, I found her still standing in prayer, reciting the same verse, and crying and invoking Allah.'"
Maymoon Ibn Hayyan

said: "I never saw Muslim Ibn Yasar turn his head while praying, whether the prayer was short or long. Once, a part of the mosque collapsed while he was praying in the mosque and the noise caused people who were as far away as the market to be terrified, but he felt no fear whatsoever and continued praying without even moving his head." He

also said: "I accompanied `Ataa' Ibn Rabah for eighteen years. When he became old and weak, he would stand in prayer and read close to two hundred verses from Chapter Al-Baqarah while standing so firmly that no part of him would move."
Abu Bakr Ibn 'Ayyash

said: "If you saw Habeeb Ibn Abu Thabit while in prostration, you would think that he was dead due to its extended length."
'Ali Ibn Al-Fudhayl

said: "I saw Ath-Thawri go into prostration while praying, and I performed Tawaaf (circumambulation) around the House (i.e., the Ka'bah) seven times before he raised his head from prostration."
'Uthmaan Ibn Abi Dahrash

said: "I never performed a prayer without invoking Allah afterwards to forgive me for falling into shortcomings in the way I performed it."
Mu`aawiyah Ibn Murrah

said: "I lived among seventy of the companions of the Prophet

(may Allah exalt his mention) and had they lived among you today, they would not recognise any of your acts except the Athan!" He

also said: "If a man from our predecessors was resurrected among you today, the only thing he would recognise would be your Qiblah (prayer direction)."
When Haatim Al-Asamm

was asked about his prayer, he replied: "When the time for prayer draws near, I perform a perfect ablution, go to where I will pray and sit there until I am fully cognisant of what I am about to do. Then, I stand up and pray, imagining that the Ka`bah is in front of my eyes, Paradise to my right, Hell to my left and the Angel of Death behind me. I imagine that it is the last prayer I will ever perform; I stand up in hope of Allah, His Paradise and His rewards, and in fear of Allah's torment in the Hellfire. I then say the Takbeer (Allahu Akbar – Allah is the Greatest) while having full attention. I recite the Quran calmly, bow humbly, prostrate with humility and attentiveness and then sit on my left leg, with my left foot laid on the floor and the right foot raised up - all the while praying with sincerity. Afterwards, I have no certainty about whether that prayer was accepted from me or not."
One of our pious predecessors