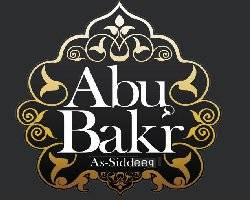 Abu Bakr may Allah be pleased with him, was a well-respected and rich merchant of Makkah, belonging to the Quraysh tribe. When Muhammad,

was bestowed prophethood, Abu Bakr, may Allah be pleased with him, was away in Yemen on business. When he came back, people gave him the astounding news that Muhammad,

, claimed to receive revelation from Allah.

Right away, he went to see the Prophet,

and asked him about the religion he was preaching. Having been the Prophet's friend since early youth (born in Makkah in 573 C.E., he was just three years younger), Abu Bakr, may Allah be pleased with him, was all too aware of his sincerity and truthfulness to have any misgivings. He accepted Islam without second thoughts. This is why he was called "As-Siddeeq (the upright)" by the Prophet,

. He was the first male who embraced Islam.
Abu Bakr's father, 'Uthmaan, (better known as Abu Qahaafah) and his mother, Salma, had named him Abdul Ka'bah, meaning "the servant of the Ka'bah". The Prophet,

changed this pagan name to 'Abdullaah and gave him the nickname Abu Bakr.
Having accepted Islam, he began to spread the message in his own social circle. As a result, some prominent people accepted Islam, such as: 'Uthmaan ibn 'Affaan, Zubayr ibn Al-Awwaam, Abdur Rahmaan ibn 'Auf, Sa'd ibn Abi Waqqaas, Abu 'Ubaydah ibn Al-Jarraah, Khaalid ibn Sa'eed, may Allah be pleased with them.
The Prophet,

, chose him to accompany him when he migrated from Makkah to Madeenah, and due to his self-sacrificing friendship, his name was immortalized in the Quran as{The second of the two}. [Quran 9:40]
After the Muslims migrated to Madeenah, the Quraysh waged many battles to uproot the Muslims from the city. Abu Bakr, may Allah be pleased with him, accompanied the Prophet,

, on all his campaigns and participated in all the battles.
Tabook was the last expedition of the Prophet,

, and he asked people to give generously to aid it. Abu Bakr, may Allah be pleased with him, was the only person to give all he had to the cause of Islam. The Prophet,

, asked him whether he had anything left for his family, and he replied that Allah and His Apostle were enough for them.
After Makkah was conquered, the Prophet,

, requested him to assign this responsibility to someone else fearing for her tender-hearted father. However, the Prophet,

and was shrouded in the same old clothes in which he had died.
Although his rule lasted only for two years, three months and ten days, he made many great contributions, the most important of which is the collection and collation of the Quran in written form.