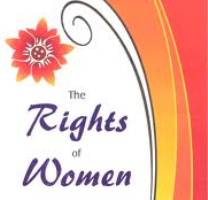 17- Islam even protects the lives of polytheistic women by forbidding their being killed in wars. It was narrated on the authority of Ibn ‘Umar, may Allah be pleased with him, that he said, “A woman was found killed during one of the battles led by the Prophet

forbade killing women and children (in wars)." [Al-Bukhari, Muslim and others]

18- Islam protects the rights of the woman by prohibiting burying her alive and making it obligatory to provide her with a good upbringing and education. Allah, The Almighty, Says (what means): {And when the girl [who was] buried alive is asked - for what sin she was killed.} [Quran 81:8-9] The Messenger of Allah

said: "Whoever has a female child whom he neither buries alive, nor humiliates, and never favors a male child of his over her, Allah will admit him to Paradise.”

19- Islam protects the rights of the woman by considering her a fundamental component of goodness in the world and the Hereafter. The Messenger of Allah

said: "If one is given the following four, he will have the goodness of both this world and the Hereafter: a thankful heart, an ever-remembering tongue (that always remembers and mentions Allah), a persevering body (that is patient) when under ordeal and a wife who maintains his honor and property."

20- Islam protects the rights of the woman by considering her as the finest thing in this world. The Messenger of Allah

said: "The world is but enjoyment, and the finest enjoyment is a righteous woman (wife)."

21- Islam protects the rights of the woman by placing Paradise, the aim of all the believers, under her feet. What a great honor the woman has received in Islam! The Messenger of Allah

said: "(The way to) Paradise lies beneath the feet of mothers." It was narrated that a man came to the Prophet

and the latter asked him: "Do you have a mother (alive)?" He answered in the affirmative, thereupon, the Prophet

said: "Then, stick to her, as (the way to) Paradise lies beneath her feet."

22- Islam protects the rights of the woman by removing from her the curse of perpetual sin which the previous religions stained her with; rather; Islam considers Hawwaa’ (Eve) and her husband, Aadam (Adam), may Allah exalt their mention, as having sinned and then been given repentance and forgiveness. Allah The Almighty Says (what means):

* {But Satan caused them to slip out of it and removed them from that [condition] in which they had been.} [Quran 2:36]

When Aadam (Adam) may Allah exalt his mention, and eve had sinned, Allah condemned one person only, who was Aadam, as Allah Says (what means): {Then Satan whispered to him; he said, "O Aadam, shall I direct you to the tree of eternity and possession that will not deteriorate?"} [Quran 20:120]

23- Islam protects the rights of the woman by assigning to her a share in inheritance after she herself had been (for long centuries) a part of it. Allah The Almighty Says (what means):

* {Allah instructs you concerning your children: for the male, what is equal to the share of two females. But if there are [only] daughters, two or more, for them is two thirds of one's estate. And if there is only one, for her is half. And for one's parents, to each one of them is a sixth of his estate if he left children. But if he had no children and the parents [alone] inherit from him, then for his mother is one third. And if he had brothers [or sisters], for his mother is a sixth, after any bequest he [may have] made or debt. Your parents or your children - you know not which of them are nearest to you in benefit. [These shares are] an obligation [imposed] by Allah. Indeed, Allah is Ever Knowing and Wise. And for you is half of what your wives leave if they have no child. But if they have a child, for you is one fourth of what they leave, after any bequest they [may have] made or debt. And for the wives is one fourth if you leave no child. But if you leave a child, then for them is an eighth of what you leave, after any bequest you [may have] made or debt. And if a man or woman leaves neither ascendants nor descendants but has a brother or a sister, then for each one of them is a sixth. But if they are more than two, they share a third, after any bequest which was made or debt, as long as there is no detriment [caused]. [This is] an ordinance from Allah, and Allah is Knowing and Forbearing.} [Quran 4:11-12]

24- Islam protects the rights of the woman by granting her all her civil rights. She thus came to have the right to conclude contracts of sale, purchase, authorization, partnership, loan, mortgage, to gift, and so on.

25- Islam protects the rights of the woman by removing from her the permanent state of being minor, as it acknowledged her full legal competence and gave her the right of guardianship over her property and other affairs.

The amazing potential of Muslim women