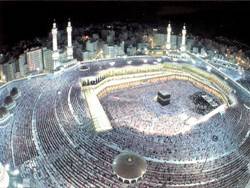 Love of Allah The Almighty is a degree for which people compete and which worshippers aspire to; forerunners hurried to realize it and lovers devote themselves to it, and worshippers are pleasantly relieved by its breeze. Love of Allah nourishes hearts and souls, and delights the eyes. It is life, a light, a cure, and a delight! If a person is deprived of life, he will be counted as dead; if a person is deprived of light, he will move in severe darkness; if a person lacks a cure, his heart will suffer all diseases; and if a person does not attain delight, his life will be full of worries and pains. Moreover, it is the people who have steadfast love of Allah that attain honor in this life and the Hereafter as they have the greatest share of the company of those whom they love.

On the day when Allah The Almighty decreed the fate of creation with His will and sublime Wisdom, He decreed that a person will be with whom he loves. How bountiful the blessing on those lovers is!

The Tree of Love is Extremely Sheltering

When the tree of love is planted in the heart and watered with the sincerity and following of the beloved, it produces all kinds of fruits regularly, by the permission of Allah The Almighty. Its roots are firmly fixed into the innermost of the heart and its branches are connected to the Sidrat Al-Muntaha (the furthest lote-tree). Indeed, a person remains elevated to His Beloved without being hindered by any barrier. Allah The Almighty Says (what means):

• {Say, [O Muhammad], “If your fathers, your sons, your brothers, your wives, your relatives, wealth which you have obtained, commerce wherein you fear decline, and dwellings with which you are pleased are more beloved to you than Allah and His Messenger and Jihaad in His cause, then wait until Allah executes His Command. And Allah does not guide the defiantly disobedient people.”} [Quran 9:24]

• {And [yet], among the people are those who take other than Allah as equals [to Him]. They love them as they [should] love Allah. But those who believe are stronger in love for Allah.} [Quran 2:165]

• {O you who have believed, whoever of you should revert from his religion - Allah will bring forth [in place of them] a people He will love and who will love Him [who are] humble toward the believers, powerful against the disbelievers; they strive in the cause of Allah and do not fear the blame of a critic. That is the favor of Allah; He bestows it upon whom He wills. And Allah is all-Encompassing and Knowing.} [Quran 5:54]

said: “By the One in whose Hand my soul is, a person will not be [a true] believer until I become more beloved to him than his father, son and all [other] people.” [Al-Bukhari and Muslim]

‘Umar ibn Al-Khattaab, may Allah be pleased with him, said, “O Messenger of Allah, you are more beloved to me than everything except myself.” The Prophet

said: “No ‘Umar, not until you love me more than yourself.” In response ‘Umar said, “By Allah! You are more beloved to me than myself.” The Prophet

It is well known that loving the Prophet

Allah The Almighty Says (what means): {O you who have believed, when the believing women come to you as emigrants, examine them. Allah is Most Knowing as to their faith. And if you know them to be believers, then do not return them to the disbelievers.} [Quran 60:10] Ibn ‘Abbaas, may Allah be pleased with him, commented on this verse saying, “Whenever a woman came to the Prophet

to embrace Islam, he would make her swear by Allah that she did not come because she detested her husband, but rather [only] because she loved Allah and His Messenger.”

said: “There are three qualities that whoever has them, will taste the sweetness of faith: To love Allah and His Messenger more than anything else; to love a person only for [the sake of] Allah, and to abhor returning to disbelief after Allah has saved him from it just as he would abhor being thrown into Hell.” [Al-Bukhari and Muslim]

It was narrated on the authority of Mu‘aath, may Allah be pleased with him, in the Hadeeth that mentions the dispute of the exalted assembly of angels, where the Prophet

I saw my Lord The Exalted in the best form [in a vision]… Allah The Almighty Said, “Ask [Me],” and I [the Prophet

] said, “Allahuma inni asa'luka fi‘l al-khayraat wa tark al-munkaraat wa hubb al-masaakeen wa an taghfira li wa tarhamani wa itha aradta biqawmin fitnatan fatawaffani ilayka ghayra maftoon, wa asaluka hubbak wahubba man yuhibbuk wahubba kulli ‘amalin yuqarribuni ila hubbik (O Allah, I beg of You [to enable me] to do good deeds, and abandon evil deeds, and to love the poor, that You forgive me and have mercy upon me, and if You intend to put people to trial, then let me die without being afflicted by any trial. I beg of You, Your love and the love of the one who loves You, and the love of the deed which brings me near to Your love.)”

Then the Messenger of Allah

Ways to Attain and Strengthen the Love of Allah

1- Reciting the Quran with reflection. The Prophet

said: “Whoever desires to love Allah and His Messenger, let him read the Mus’haf (Qur’aan).”

3- Mentioning and remembrance of Allah The Almighty constantly with the tongue and the heart. Ibraaheem ibn Al-Junayd

4- Giving precedence to what Allah The Almighty loves over what the self loves and desires.

5- Realizing and observing the Names and Attributes of Allah The Almighty and living their meanings in the heart. ‘Aa’ishah, may Allah be pleased with her, said,

sent a battalion under the command of a man who would lead his companions in prayer. This man would finish his recitation with Soorat Al-Ikhlaas( chapter 112). When they returned, they mentioned this to the Prophet

. He said [to them]: “Ask him why he does this.” They asked him and he said, “I do so because it contains the Attribute(s) of The Most Gracious and I love to recite it [in my prayer].” The Prophet

said [to them]: “Tell him that Allah loves him.”

7- Being secluded with Allah The Almighty, when He descends to the lowest sky, to talk to Him, recite His Words, supplicate to Him and seek His forgiveness.

8- Sitting with the righteous and sincere lovers of Allah.

9- Avoiding any means that stand as a barrier between the heart and Allah The Almighty. 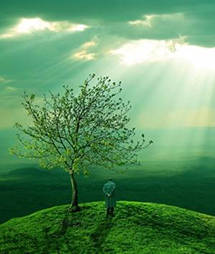