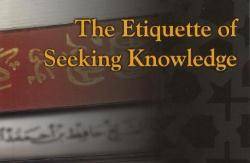 • Specialization: If a Muslim wants to specialize in one science, he should choose the most honorable branch of science and the most beneficent one that suits his abilities. It was said, “If you want to be a scholar, you should know everything about one thing, but if you want to be cultured, then know something about everything.”

• Memorizing with understanding and reflection: The Prophet

• Documenting: It was said, “Write down knowledge.” It was also said, “Knowledge is like game that is hunted and writing catches it.” Hence, we should write down knowledge in order not to forget it and carefully choose what we write. It was said, “There are three categories of people who listen to the scholar; the first one writes down all that he hears; the second does not write but only hears, while the third selects and he is the best among the three”.

said: “Seek knowledge as seeking it for the Sake of Allah leads to fearing Him, and seeking it is an act of worship, studying it is Tasbeeh (glorification of Allah), searching for it is Jihaad (a difficult struggle), teaching it is charity to those who do not have it, and conveying it to those who deserve to learn it is a good deed.”

• Arranging learning hours: A Muslim should always be well organized in all his affairs and should be keen on organizing his time and spend it in gaining knowledge and know-how.

• Avoiding shyness in seeking knowledge: Allah The Almighty Says (what means): {So ask the people of the message if you do not know.} [Quran 16:43] ‘Aa’ishah

said: “The best women are the women of the Ansaar, shyness did not prevent them from comprehending their religion.” So the Muslim should ask about that which he desires to know more of and shyness should not prevent him from asking. For knowledge is a treasure kept in chests and the keys are questions.

said, “It reached me that a man heard a Hadeeth from the Messenger of Allah

so I purchased a camel and rode it for a month until I reached Ash-Shaam. I knew that this man was ‘Abdullaah ibn Unays. I told his gate keeper to say to him, ‘Jabir is at the door.’ The gate keeper said, ‘Jabir ibn ‘Abdullaah?’ ‘Yes,’ I replied. So ‘Abdullaah rushed out and embraced me and I embraced him. I said, ‘It reached me that you heard a Hadeeth from the Messenger of Allah

concerning Qisaas (retribution) and I feared that one of us might die before I get it. So Abdullaah ibn Unays mentioned to him the Hadeeth.” [Ahmad and At-Tabarani]

said: “I knew about a Hadeeth that was heard by ‘Ali

and I feared that I might not find it with anyone else if he died, so I travelled to him and found him in Iraq.” [Al-Khateeb]

said: “If I knew of someone who I can reach by riding my camel and who is more knowledgeable than me with what was revealed to the Prophet

I would go to him to increase my knowledge.” [Ibn ‘Asaakir]

• Applying what one learned; Allah The Almighty Disapproved of those who do not apply what they know and likened them to donkeys that carry (heavy loads of) books, but do not understand what they carry. Allah The Almighty Says (what means): {The example of those who were entrusted with the Torah and then did not take it on is like that of a donkey who carries volumes [of books].} [Quran 62:5]

Allah The Almighty Says (what means): {Do you order righteousness of the people and forget yourselves while you recite the Scripture? Then will you not reason?} [Quran 2:44] So a Muslim should know with certainty that he will be asked about what he put forth for himself during his life. The Prophet

said: “The slave will not step forward on the Day of Resurrection until he is asked about his age and how he spent it, his knowledge and what he did with it, his wealth and how he acquired it and spent it, and about his body and how he used it.” [At-Tirmithi]

• Respecting the teacher: a teacher has a great virtue upon his students.

said to his son: “O son, when you sit with scholars, be more diligent to listen than to speak and learn to listen attentively just as you learn to be quiet. When you ask, your questions should be for the purpose of understanding and realizing, not for arguing or showing deficiency.”

• Observing etiquettes during learning sessions: A Muslim should sit with his teacher politely and calmly. He should not keep turning his head, pointing or laughing. He should present himself in a pleasant manner, be clean and avoid speaking or asking questions until taking permission. One should not belittle his colleagues or mock them, rather he should know that they are his brothers in knowledge so they should be shown mercy and respect.

Among the reasons that help in gaining knowledge and studying is to study in a location that has adequate light, quiet and freedom from distracting noises. One should avoid studying in bed as this makes one feel sleepy. Moreover, books should be arranged well and organized. And one should give his body its right by resting occasionally. He should choose the right time for studying and divide this time appropriately to study all branches of science.