The Guards of the Prophet - III 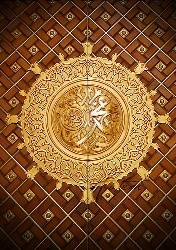 He was one of those who witnessed the Battle of Badr, and he was among the leaders of the tribe of Al-Aws. He is the one whose stick had lit up for him at night when he was returning to his home after accompanying the Prophet

. He embraced Islam at the hands of Mus‘ab ibn ‘Umayr

and he was among those who killed the leader of the Jews, Ka’b ibn Al-Ashraf. The Prophet

nominated him to collect the obligatory charity and alms from the tribes of Muznah and Bani Saleem. He also assigned to him to lead the guard during the Battle of Tabook. ‘Abbad

showed extreme courage in the Battle of Al-Yamamah, and he had a lofty status. He lived to be forty-five years

and make him pleased.

witnessed the second Al-‘Aqabah Pledge of Allegiance, as he went out with the delegation of Madeenah to give the Prophet

their pledge of allegiance in Makkah.

reached Madeenah, emigrating from Makkah, he stayed at the house of Abu Ayyoob

and he also paired him and Mus‘ab ibn ‘Umayr

as brothers. He witnessed all the military expeditions with the Prophet

It is narrated that when the Prophet

in Khaybar, he passed the night with her in a tent belonging to Abu Ayyoob

who passed the night carrying his sword to guard the Prophet

. He remained going around the tent until the morning, and when the Prophet

got up and saw him in his place, he asked him: "What is up with you, O Abu Ayyoob?" He replied, “O Messenger of Allah, I was afraid of this woman (i.e., Safiyyah) on you, for you have just killed her father, her husband and her people, and until recently, she was in unbelief. So I was afraid of her on you." Whereupon, the Prophet

said: "O Allah! Preserve Abu Ayyoob as he spent the night preserving me."

nicknamed him Abu ‘Abdur-Rahman. His father died in the Jahiliyyah (Period of Ignorance), but his mother embraced Islam and accompanied the Prophet

so he was often called by the name of his mother, ‘Ibn Umm ‘Abd’. He

was among the first forerunners to Islam, being the sixth among the first six to enter into this religion. He emigrated to Al-Habashah and to Madeenah as well, and he witnessed the Battle of Badr and all the other battles with the Prophet

. He was the one who delivered the deathblow to Abu Jahl, and the Prophet

granted him the sword of Abu Jahl when he brought his head to him. He also guarded the Prophet

on the day of the treaty of Al-Hudaybiyah. Moreover, ‘Umar ibn Al-Khattab

put him in charge of the state treasury in Al-Koofah during his Caliphate.

died in the year 32 A.H., at the end of the Caliphate of ‘Uthman

He was the horseman of the Prophet

. There is a difference of opinion among historians about his name, yet the most well-known opinion is that his name is Al-Harith ibn Rab‘iyy ibn Dawmah ibn Khinas. He was also among the guards of the Prophet

. He narrated about one-hundred and seventy Hadeeths (narrations) from the Prophet

and from these Al-Bukhari and Muslim

His nickname is Abu Yazeed, and the name of his father is Kinaz ibn Al-Haseen. Both Anas and his father

the father being twenty years older than his son.

On the day of the Battle of Hunayn, the Prophet

: "Who will be on guard tonight?" Anas ibn Abi Marthad Al-Ghanawi

said, "I shall, O Messenger of Allah." [Abu Dawood]