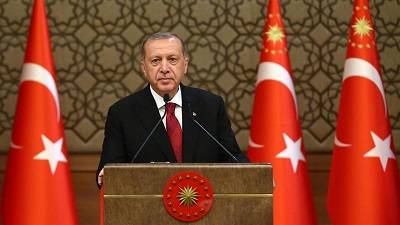 The latest war of words erupted after Turkish President Recep Tayyip Erdogan criticised a controversial law adopted by Israel's parliament last week, which defines the country as the nation-state of the Jewish people.

The legislation has provoked fears it will lead to blatant discrimination against its Palestinian citizens, as it makes Hebrew the country's national language and defines the establishment of Jewish communities as being in the national interest while stripping Arabic of its designation as an official language.

"This measure has shown without leaving the slightest room for doubt that Israel is the world's most Zionist, fascist and racist state," Erdogan said in a speech on Tuesday to members of his Justice and Development (AK) Party.

"There is no difference between [Nazi Germany leader Adolf] Hitler's obsession with the Aryan race and Israel's understanding that these ancient lands are meant only for Jews.

"The spirit of Hitler, which led the world to a great catastrophe, has found its resurgence among some of Israel's leaders," he added.

Turkey broke off diplomatic ties with Israel in 2010 after 10 pro-Palestinian Turkish activists were killed by Israeli commandos who boarded a Turkish-owned flotilla trying to deliver aid and break Israel's years-long maritime blockade of the Gaza Strip.

Relations were restored in 2016, but they soured again recently when the two countries expelled each other's top diplomats in May this year in a dispute over Israel's killing of Palestinians amid mass protests in the Gaza Strip near Israel's fence.

For nearly four months, Palestinians in the Gaza Strip have been protesting along the fence with Israel, demanding their right to return to the homes and land their families were expelled from 70 years ago.

Since the protests began on March 30, Israeli forces have killed at least 140 Palestinians in the besieged coastal enclave and wounded more than 16,000 people, according to health officials in Gaza.