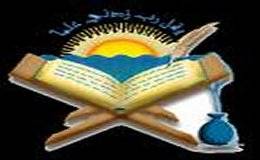 Ibn Khaldoon was born in Tunisia in 732 A.H. to a fairly well-to-do family who had earlier migrated from Seville in Muslim Spain. His lineage goes to Yemen which land our hero's family had left in the company of the army that conquered Spain.

During his childhood in Tunis, Ibn Khaldoon must have had his share in his family's active participation in the intellectual life of the city, and to a lesser degree, its political life, the household in which Ibn Khaldoon was raised was frequented by the political and intellectual leaders of Western Islam (i.e. North Africa and Spain), many of whom took refuge there and were protected against angry rulers.

Ibn Khaldoon led a very active political life before he decided to write his well-known masterpiece on history. He worked for rulers in Tunis and Fez (in Morocco), Granada (in Muslim Spain) and Baja (in Tunisia) successively. At the age of forty-three, Ibn Khaldoon finally succeeded in crossing over once more to Muslim Spain, not with ambitious designs of his youth, but as a tired and embittered man with no purpose save escaping the turmoil of North Africa." Unfortunately, the ruler of Granada caused Ibn Khaldoon's friend, Ibn Al-Khateeb, to flee to North Africa. When he learnt of Ibn Khaldoon's attempts to help his friend, he was expelled from Granada. So he went back to North Africa to spend four years in seclusion to do some thinking in peace.

Intellectually, Ibn Khaldoon was well-educated, having studied (in Tunis first and Fez later) the Quran, Hadeeth and other branches of Islamic studies such as dialectical theology, Sharee'ah (Islamic Jurisprudence). He also studied Arabic literature, philosophy, mathematics and astronomy. But we can safely say that Ibn Khaldoon learnt very much from the school of life in which he actively participated, moving from place to place and from one royal court to another, sometimes at his own will, but often forced to do so by plotting rivals or despotic rulers.

Ibn Khaldoon learnt much from his meetings with all sorts of rulers, ambassadors, politicians and scholars, he came in contact with in North Africa, Muslim Spain, Egypt and other parts of the Muslim World. All of these circumstances and experiences seem to have contributed to the formation of his views on history, culture and society, neatly expressed in his book on history and concisely summed up in his well-known master-piece “Al-Muqaddimah (‘Prologue’).”

The revolutionary views of Ibn Khaldoon have always attracted not only Arab scholars’ attention but the attention of many a Western thinker as well. In his study of history Ibn Khaldoon was a pioneer in subjecting historical reports to the two basic criteria of (1) reason and (2) social and physical laws. He considered the following four points worthy of consideration in studying and analyzing historical reports:

1. Relating events to each other through cause and effect.

2. Drawing analogy between the past and the present.

3. Taking into consideration the effect of the environment.

4. Taking into consideration the effect of inherited and economic conditions.

But Ibn Khaldoon's work was more than a critical study of history. It was, in fact, a study of human civilization in general, its beginning, factors contributing to its development, and the causes of its decline. Thus, unwittingly, Ibn Khaldoon founded a new science: The science of social development or sociology, as we call it today.

“I have written on history a book in which I discussed the causes and effects of the development of states and civilizations, and I followed in arranging the material of the book an unfamiliar method, and I followed in writing it a strange and innovative way.” These are the words of Ibn Khaldoon indicating the new interesting method he followed in the study of history, whereby he created, in effect two new sciences: Historiology and Sociology at the same time.

Due to his emphasis on reason and its necessity in judging history and social events, it has been claimed that Ibn Khaldoon tried to refute conventional religious knowledge and substitute it with reason and rational philosophy. The claim is founded on a false premise or assumption, i.e. that religion and reason are necessarily in conflict with each other. Naturally, it is true that some religions do teach things which are irrational in nature. But this is certainly not true of Islam which has always encouraged observation and thinking and condemned the non-believers for not using their reason and thinking. There are many verses in the Qur'an to this effect.

The close relationship between Ibn Khaldoon's views and Islam are clearly seen in his remarks on the role of religion in unifying the Arabs and bringing progress and development to their society. We also see that connection in his opinion on the close affinity between religion and the state, pointing out that injustice and despotism are clear signs of the downfall of the state. On philosophy, Ibn Khaldoon points out that metaphysical philosophy has one advantage only, which is to sharpen one's wits. For knowledge of the metaphysical world, especially in matters of belief, can only be derived from the divine revelation, i.e. the Quran and the Sunnah.

In education, Ibn Khaldoon was a pioneer when he remarked that suppression and use of force are enemies to learning, and that they lead to laziness, lying and hypocrisy. He also pointed out to the necessity of good models and practice for the command of good linguistic habits.

Because the era of Ibn Khaldoon was an age of decline for Muslim civilization, and most of the efforts of scholarship were directed to collecting, summarizing and memorization of the body of knowledge left by the ancestors, he severely attacked those unhealthy practices that led to stagnation and to the stifling of creativity on the part of Muslim scholars.

But if Ibn Khaldoon made some interesting contribution to education, he certainly made a major and pioneering contribution in the fields of sociological and historical studies. For it was he who pointed to the necessity of subjecting both social and historical phenomena to scientific objective analysis. He noted that those phenomena were not the outcome of chance, but were rather controlled by laws that had to be discovered and applied in our study of society, civilization and history. Historians, he remarked, committed errors in their study of historical events, due to three major factors:

1) Their ignorance of the natures of civilization and peoples, (2) their bias and prejudice and (3) their blind acceptance of reports given by others.

Ibn Khaldoon pointed out that true progress and development comes through correct understanding of history, and the latter can only be achieved by observing the following:

2) Absolute objectivity, which means that the historian should not be in any way show prejudice for or against anyone or any idea.

3) Confirmation and scrutiny of reported information. One should learn all one can about the historians whose reports one hears or reads. One should check their morals and trustworthiness before accepting their reports.

4) Not limiting history to the study of political and military news or to news about rulers and states. For history should include the study of all social, religious and economic conditions.

These were but a few of the many interesting views left by Ibn Khaldoon in his famous Al-Muqaddimah (‘Prologue’) and his book on history, two masterpieces that have left clear marks on human thought and its development.