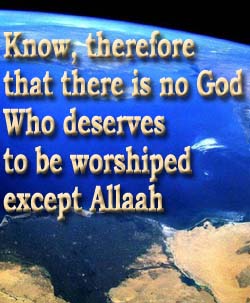 Man always looks for what benefits him and what protects him from harm. However, to accomplish this, man must be able to realize what is harmful. He must then know whom he should need, trust, and love so that he can attain what is beneficial as well as to feel good about his choice.

He also must know the proper and good approach that would make him achieve this goal. This latter condition requires that man:

1.Know about the harm

2.What ways can be used to drive the harm away?

Certainly, man can have no better guidance than that which comes from the One Who had perfected everything, and the One who Has no deficiency in Himself and in His Attributes. The One Who is Ever-Living and Who does not die. There can be no One better than the One Who Has no need for anything; the One Who is rich; the Giver; the One who, after all, controls man's soul. Man is so poor to Him. He is Allah, 'The One and Only True God'. Man can bring harm to himself if he seeks other than Allah for help. Allah is the One Who can help man drive away any harm for it cannot occur without His Will and His Power.

Allah the Almighty sent down His Books and chose His Messengers to guide man to:

1. Know His Lord as He Almighty had explained about Himself

2. Seek Him Alone while living in accordance with His plan

Knowing Allah's Names and Attributes liberates man from worshiping any form of creation because creation is weak and is in need of The Creator, Allah. The knowledge about Allah leads man to know that he is created to live according to Allah's way as revealed to His Messengers may Allaah exalt their mention the final of whom was Messenger Muhammad

This Revelation contains a complete code of life. Everything that is beneficial or harmful is established so that man can center his life around this Revelation. If man commits wrong and knows that Allah is Oft-Forgiving he would turn to Him, and to Him alone, seeking His forgiveness; Allah Says (what means): {So know, [O Muhammad], that there is no deity except Allah and ask forgiveness for your sin and for the bleieving men and believing women} [Quran 47:19]

It is wrong to think or believe that Allah created other 'gods' besides Him so that man turns to them for help; loves them or fear them, etc. He is the same God of all nations. He does not order that people should make of stars, sun, fire, 'Eesa (Jesus), Moosa (Moses), may Allaah exalt their mention, and Muhammad

etc., as deities besides Him. He, the Almighty cannot be 'contradictory'. He has one way (religion) that calls man to surrender his will only to Him.

He warned that if man (even Muhammad

) would take partners with Him, then his work will fail and will be among losers; Allah Says (what means): {And it was already revaled to you and to those before you that if you should associte [anything] with Allah, your work would surely become worthless, and you would surely be among the losers. Rather, worship [only] Allah and be among the grateful} [Quran 39:65-66]

Let us know what Muhammad

the Prophet, who knew Allah best, used to say: "O Allah, I seek refuge in You for Your Pleasure and against Your Wrath, and in Your Forgiveness and against Your Punishment and in You from You, I cannot Praise You as You can Praise Yourself." (Muslim, Abu Dawood, At-Tirmithi and Ibn Majah)

used to say also: "I have surrendered myself to You, I have directed my face to You, I have entrusted my affairs to You, I have compelled my back to refuge in You, in want and in fright of You, there is no resort nor survival from You except (in turning) to You. I have faith in Your book (i.e., the Quran) which You brought down and in the Prophet (Muhammad) you have sent." (Al-Bukhari and Muslim)

When we read the Quran we can see that Allah the Almighty Says (what means): {Whatever Allah grants to people of mercy - none can withhold it; and whatever He may withholds - none can release it thereafter. And He is the Exalted in Might, the Wise} [Quran 35:2]

{And if Allah should touch you with adversity, there is no remover of it except Him; and if He intends for you good, then there is no repeller of His bounty. He causes it to reach whom He wills of His servants. And He is the Forgiving, the Merciful} [Quran 10:107]

We should be motivated to return to Him Alone at times of ease and at times of hardship. Allah Says (what means): {If Allah should aid you, non one can overcome you; but if He should forsake you, who is there that can aid you after Him? And upon Allah let the believers rely} [Quran 3:160]

The Quran, therefore, leads man to a true liberation from any false attachment. It brings peace to the heart. It helps the believer against hypocrisy and all forms of dishonesty.

Imagine, for example, a believer facing a problem at work. He sees wrong and faces unlawful practices. He does not fear rejecting what is wrong. He knows that the job is only a means to gain his sustenance. While he may be unable to correct what is wrong, he knows well that Allah is the One Who provides. If he leaves his job for the sake of Allah, Allah will give him a better one. Allah Almighty Said (what means): "And whoever fears Allah—He will make for him a way out. And will provide for him from where he does not expect. And whoever relies upon Allah — then He is sufficient for him. Indeed, Allah will accomplish His purpose. Allah has already set for everything a [decreed] extent." [Quran 65:2-3]

The above texts, necessitates that man must depend upon Allah Almighty asking Him alone for assistance. It also requires that man must love Allah and worship Him alone to gain His pleasure and His help. Is it not true that the people who consider this life as the "Final Goal" end up worshiping many things in it? You see them so careful about "having it all". They torture themselves: pain, difficulty, constant worry, keeping their hands in the banks for loan after loan to keep up with the "demands of development". They are under the constant threat of foreclosure. They constantly see poverty in front of their eyes.

Our purpose of existence on earth is more meaningful than being slaves to worldly gains. There can be no meaningful life better than that prescribed by our Creator Allah. Every act done according to Allah's way is an act of worship. Man is the beneficiary and Allah is in no need. Allah Says (what means): "O mankind, you are those in need of Allah, while Allah is the Free of need, the Praiseworthy}[Quran 35:15]