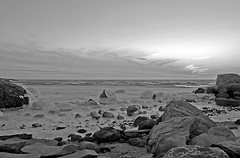 passed his childhood days in a manner quite strange for the Arabian society. Instead of playing with children of his age group, he felt disgusted in their company and preferred to be in solitude. Allah the Almighty had kept him aloof from every kind of debasement and immorality. A few boys of Quraysh forced him to enjoy a marriage celebration where there was dancing and music. However, as he,

He was perhaps seven years old when the Quraysh started rebuilding the Ka'bah, which had suffered damage from a flood. During the construction work, he,

joined the party of workers and helped them by carrying stones and giving them to the masons. He was wearing an Izaar (waist sheet) which was causing him some trouble doing the work. The nakedness of a boy of seven was not then considered something improper. So, his uncle Al-'Abbaas grabbed hold of the waist sheet and pulled it so violently that he,

grew shameful to the extent that he fell down unconscious. At last, the people felt the gravity of the situation and put his waist sheet back on, after which he,

was twelve years old when Abu Taalib planned to go with a merchant caravan to Syria leaving him behind in Makkah. But he,

was so used to the company of Abu Taalib that he could not bear separation from his uncle. Abu Taalib felt moved and agreed to take him to Syria. When they reached Busrah (which was a part of Syria, in the vicinity of Howran under the Roman domain), they met a monk called Baheerah (his real name was Georges), who showed great kindness and entertained them lavishly. He had never been in the habit of receiving or entertaining them before. He readily enough recognised the Prophet,

and said while taking his hand: "This is the master of all humans. Allah will send him with a Message which will be a mercy to all beings." Abu Taalib asked: "How do you know that?" He replied: "When you appeared from the direction of ‘Aqabah, all stones and trees prostrated themselves, which they never do except for a Prophet. I can recognise him also by the seal of Prophethood, which is below his shoulder, like an apple. We have learnt this from our books." He also asked Abu Taalib to send the boy back to Makkah and not to take him to Syria for fear of the Jews. Abu Taalib obeyed and sent him back to Makkah with some of his men servants.
Harb Al-Fijaar (The Sacrilegious Wars), First Participation in Battle
A great fair was regularly held at 'Ukaath. This fair would organise a number of programs including horse races, wrestling, demonstrations of the art of combat and poetic competitions. All the tribes of Arabia were highly belligerent by nature and drew swords against one another at the smallest incident.
Once, in the course of the fair at 'Ukaath, the Hawaazin and Quraysh tribes challenged each other due to a slight provocation. At the outset, some wise and sober people stood in the way and put the matter right. Nevertheless, some mischief-mongers worsened the situation, which led to a large-scale fighting and killing on both sides. The war was known as Harb Al-Fijaar because it took place in the month of Dhul-Qa'dah when fighting was altogether forbidden. Muhammad,

was hardly fifteen when the ‘sacrilegious’ wars started - which continued with varying fortunes and considerable loss of human life for a number of years. This war was based on a series of four wars in which the first three were small and the fourth war happened to be more fierce than the preceding one as all the tribes of Qays joined the Hawaazin tribe while all the tribes of Kinaanah came to the help of the Quraysh. Thus, this war developed to become a war between the Qays and Kinaanah tribes. The fourth and last war was so terrible that some of the chieftains had their feet chained so they would be unable to flee from the battlefield.
The Prophet,

led the Quraysh while Harb Ibn Umayyah was the commander of all the troops of Banu Kinaanah. Muhammad,

was entrusted with the service of picking up the arrows for his uncles. However, he,

was saved from combat action. At the outset Banu Hawaazin seemed to be dominating, but in the end, Banu Kinaanah turned the tables against the Banu Qays and the war ended with a peace treaty.
Al-Fudool Confederacy:
At the conclusion of these wars when peace was restored, people felt the need for forming a confederacy at Makkah for suppressing violence and injustice, and vindicating the rights of the weak and the destitute. Representatives of Banu Haashim, Banu Al-Muttalib, Asad Ibn ‘Abd Al-‘Uzzaa, Zahrah Ibn Kilaab and Taym Ibn Murrah were called to meet in the habitation of an honourable elderly man called ‘Abdullaah Ibn Jada‘aan At-Taymi to enter into a confederacy that would provide for the abovementioned terms.
During his prophethood, the Prophet