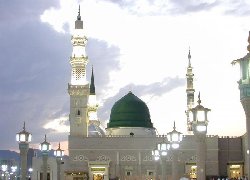 The Charter of Madeenah

After the Hijrah (emigration) of the Prophet

By carefully reading the terms of this charter, one can observe that some of these terms were specifically meant for the believers from the Muhaajiroon (emigrants) and the Ansaar (helpers), while, others were meant to organize the relation between them and the Jews, and yet other terms were general and applied to them all.
First - the terms that were specifically meant for the believers were:
1- Distinct from all other people, the believers represent one nation. This term included all the believers from the Muhaajiroon and the Ansaar and those who followed them and performed Jihaad with them. Distinct from all other people, they represented one nation. They were united by the Islamic creed that united their Qiblah (direction of prayer), goal and allegiance. This, of course, nullified all other types of relations and tribalism, and discarded all types of discrimination that precluded comprehensive unity.
2- Each group of believers will remain as it was before Islam. They will continue to pay blood money and redeem their prisoners with kindness and justice. Furthermore, they will pay the debts of the debtor among them with kindness and justice. This term established the principle of social solidarity among the believers by helping the weak and giving to the needy.
3- Another important term of the Charter was: The believers, who fear Allah The Almighty, will together oppose the transgressors from among them and those who encourage injustice, sin, enmity or corruption among the believers. If anyone is found guilty, the believers will oppose him together even if he is the son of one of them. This term made it obligatory on the believers to support the oppressed and oppose the aggressors and those who cause mischief. Furthermore, this term only addressed the pious believers because they were the keenest to act according to the laws of the Sharee'ah.
4- A believer should not kill another believer to avenge the death of a disbeliever; and a disbeliever is not to be supported against a believer. This term emphasized the firm relation and allegiance between the believers. Additionally, the term was evidence that the blood of the believer is not equal to that of a disbeliever.
Second - the terms that were specifically meant to organize the relations between the Jews and the believers:
5- As long as they are engaged in fighting, both the believers and the Jews should spend together. This term indicated that the Jews should also share in the war expenses so as to defend Madeenah.
6- Both the believers and the Jews of Banu ‘Awf are one nation; the Jews will keep their religion and the Muslims will keep theirs. The Jews of Banu An-Najjaar and others are to be treated in the same way as the Jews of Banu ‘Awf, except the one who wrongs himself and violates the rules for, in so doing, he will be destroying none but himself. This term established the parameters for the relation between the Jews and the believers. It considered the Jews as citizens of the Islamic state, and guaranteed their religious freedom as long as they fulfilled their duties.
7- Not for the merchants of Quraysh and not for its supporters. This clause established the limits for the relations between the Jews and the polytheists. The Jews were not allowed to be allies of the Quraysh or any other tribes that were openly opposed to Islam.
8- None of the Jews should leave without taking the permission of the Prophet

. This term prevented the Jews from engaging in any military activity against the Muslims outside the boundaries of Madeenah – something that could have had huge negative effects on both the security and the economy of the place.
9- The Jews should bear their own expenses and the Muslims should bear their own. They support each other against anyone who fights the parties who are committed to this Charter, give advice to each other and support the oppressed among them
Third - general terms:
10- In case of conflict between the people of this Charter, its ruling is to be referred to Allah The Almighty and the Prophet

: This term determined the ultimate authority in civil affairs and issues in order to prevent any internal disorder.
11- Yathrib must be protected by the parties of this Charter from any internal or external assault: When it is stated that something is prohibited, it means that it is not to be violated. Consequently, it was neither permissible to cut the trees of Madeenah nor kill its game. This term determined the sacred precincts of Madeenah, guaranteed its security and put an end to disorder and problems that might threaten its peace and security.
The terms of this Charter were based on authentic Sharee'ah texts and rules and considerable interests. For example, Allah The Exalted Says (what means): {Allah does not forbid you from those who do not fight you because of religion and do not expel you from your homes – from being righteous toward them and acting justly toward them. Indeed, Allah loves those who act justly} [Quran 60: 8]
Moreover, the Prophet

said: "All the believers are equal in retaliation; regardless of the position of the believer, it is binding on other Muslims to protect any person who is under his protection. All the believers are united - together against others; a believer is not to be killed in retaliation for the death of a disbeliever; and the covenanted is not to be killed during the period of the covenant." [Ahmad, Abu Daawood – Saheeh: Al-Albaani]
Furthermore, the terms of this Charter revealed the justice of the Prophet

in his dealings with the Jews. It also marked the nullification of all types of discrimination that prevailed during the pre-Islamic era and established the foundations of Islam. Additionally, it included all the necessary constitutional and administrative factors and determined the relations between the citizens and the state on one hand, and the relation between the citizens themselves on the other.
This Charter could have been effective with the Jews if they had not been treacherous and unfaithful by nature. They used many methods to plot against the Prophet

and his followers and to demolish the foundations of Islam. However, all their attempts failed due to the wisdom of the Prophet

and his skill in administering the affairs of the state.