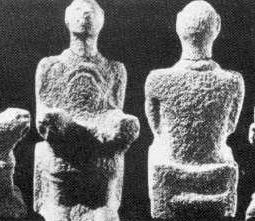 The religious condition of the Arabs

The Arab nation was suffering severe religious retardation, matchless foolish paganism, moral and social deviations, as well as political and legislative chaos. Hence, they were of low status and lived on the margins of history. In the best cases, they were no more than subjects of the Persian or the Roman empires. Their hearts were full of glorification for their forefathers’ heritage and compliance with their tradition regardless of the aberration, deviation and straying that it might have involved. Each tribe had its own idol to worship. The tribe of Huthayl bin Mudrikah worshipped Suwaa‘, the Kalb tribe worshipped Wadd, the Mathhij tribe worshipped Yaghooth, the Khaywaan tribe worshipped Ya‘ooq, the Himyar tribe worshipped Nasr, and the Khuzaa‘ah and Quraysh tribes worshipped ‘Isaaf and Naa’ilah. Manaat was an idol placed on the coast and was glorified by all Arabs, especially by Al-Aws and Al-Khazraj. Al-Laat was an idol that was placed in Thaqeef. Al-‘Uzza was an idol that was located in Thaat ‘Irq and it was the greatest idol in the sight of Quraysh.

In addition to these main idols, there were countless small idols that were easily transferred when traveling and placed at the people’s homes.
In a Hadeeth on the authority of Abu Rajaa’ Al-‘Utaaridi, may Allah be pleased with him, he said, “We would worship stones, and if we found a stone that was better than the first one, we would throw the first one away and embrace the latter. If we could not find a stone, then we would collect some soil, bring a sheep, milk the sheep over it, and then circumambulate it.” [Al-Bukhari]
This ridiculous paganism prevented Arabs from knowing Allah The Almighty, glorifying Him, venerating Him and believing in Him and the Last Day, even if they claimed that the idols were no more than intermediaries connecting them with Allah The Almighty. The so-called deities dominated their hearts, deeds, conduct, as well as all other aspects of their life, and thus they developed a feeble veneration of Allah The Almighty, who Says (what means): {Only those who hear will respond. But the dead - Allah will resurrect them; then to Him they will be returned.} [Quran 6:36]
The remnants of the religion of Ibraaheem (Abraham), may Allah exalt his mention, had been subjected to distortion, alteration, and amendment. Pilgrimage, consequently, was a season for boasting, ostentation and seeking judgment on which of the boasting parties was better than the other. The remainder of the unswervingly upright creeds had become deviated, and some of them were mingled with a great deal of myth.
There were some righteous people who dismissed the worship of idols and its associated practices, such as slaughtering. Among those people there was Zayd bin ‘Amr bin Nufayl who neither slaughtered animals for the sake of stone alters, nor consumed dead animals and blood.
There was also Quss bin Saa‘idah Al-‘Iyaadi, who followed the religion of Ibraaheem and Ismaa‘eel (Abraham and Ishmail), may Allah exalt their mention. He was an orator, sagacious, perceptive and meritorious. He would call people to believe in monotheism, worshipping Allah The Almighty and dismissing the worship of idols. He believed in resurrection after death and gave glad tidings about the emergence of the Prophet

. It is narrated on the authority of Ibn ‘Abbaas, may Allah be pleased with them, that he said, “Quss bin Saa‘idah would address his tribe in the ‘Ukaath Market and say, ‘The truth will be recognized from this direction’ – and he pointed to Makkah. People asked, ‘What is that?’ He said, ‘A man will descend from Lu’ayy bin Ghaalib inviting you to the word of sincerity, everlasting life, and eternal bliss. If he calls you, answer his call. If I live up to his commissioning, I will be the first one to go to him.’” [Abu Nu‘aym: Dalaa’il An-Nubuwwah] He lived up to the time of the Prophet

but died before his commissioning as a Prophet.
Some Arabs converted to Christianity, others into Judaism, but most of them worshipped idols and statues.