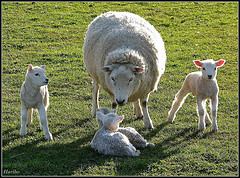 The Prophet as a shepherd

worked as a shepherd in order to assist him. The Prophet

informed us that he and all the other prophets worked as shepherds. The Prophet

worked as a shepherd in Makkah when he was a young boy and took wages for it. He

said: “Allah did not send any prophet except that he was a shepherd.” His Companions asked him, “Did you do the same?” The Prophet

replied: “Yes, I used to be a shepherd for the people of Makkah for certain Qiraats (areas).” [Al-Bukhari]

the tranquility that his honored soul required. It also gave him an opportunity to enjoy the beauty of the desert and contemplate the greatness of Allah The Almighty as displayed in the creation. Moreover, he had a chance to contemplate in the darkness of night, the light of the moon and the swaying of the trees. This atmosphere granted him the kind of psychological upbringing that taught him patience, forbearance, endurance, kindness, mercy, caring of the weak until they become strong, subduing the power of the strong so that they would care for the weak, starting irrigation and fertilization projects, avoiding whatever would bring about destruction and fear, and everything else that life away from the desert would not grant. Life in the desert grants a tranquility that is suitable for weak and domesticated creatures.
The Prophet

as a shepherd reminds us of his Hadeeths that guide Muslims to be kind to animals. Thus, shepherding was practical training for the Prophet

to be a leader of nations.
Shepherding grants many nurturing-related characteristics:
1.     Patience: The shepherd must wait from sunrise to sunset as sheep eat slowly and so he has to be patient and enduring. This also applies to nurturing people. The shepherd does not live in a lavish palace or lead a luxurious life; on the contrary, he lives in a very hot atmosphere, especially in the Arabian Peninsula. He needs a lot of water to quench his thirst and eats coarse food as he leads a rough life.
2.     Modesty: Shepherding requires serving sheep and supervising their delivery, guarding them and sleeping beside them. The shepherd may be touched by their urine or stools and could not feel annoyed as a result. After encountering this more than once, he would become modest and avoid arrogance and pride. It was narrated in Saheeh Muslim that the Prophet

said: “The one who has in his heart the weight of a mustard seed of pride shall not enter Paradise.” A man asked him, “But one loves that his dress should be fine.” The Prophet

remarked: “Indeed, Allah is beautiful and He loves beauty. Arrogance is to reject the truth [out of self-conceit] and despise others”.
3.     Courage: During his work, the shepherd may encounter wild animals, so he needs to be courageous enough to kill these wild animals and defend his sheep.
4.     Mercy and kindness: The shepherd would assist his sheep when they are sick or injured. Their sickness and pain would make him feel for them and he would endeavor to relieve their pain. The one who is merciful to animals is even more merciful to humans, especially if he was a prophet sent by Allah The Almighty to teach people, guide them, save them from Hell, and bring them happiness in this life and the Hereafter.
5.     Earning a living through labor: Allah The Almighty was well capable of sparing the Prophet

from shepherding, but this was meant as a form of nurturing for the Prophet

and his Ummah (nation) such that it would learn how to earn an honest living. Shepherding was one such type of earning a livelihood through labor.
It was narrated on the authority of Al-Miqdaam, may Allah be pleased with him, that the Prophet

said: “Nobody has ever eaten a better meal than that which he earns by working with his own hands. The Prophet of Allah, Daawood [David], may Allah exalt his mention, would eat from the earnings of his manual labor.” [Al-Bukhari]
There is no doubt that relying on lawful earnings makes one free and able to declare the truth. There are some people who obey tyrants, agree with what they do, fail to condemn falsehood and support their whims, as they are afraid that to do otherwise would cause them to lose their jobs.
The fact that the Prophet

worked as a shepherd to earn his living is very significant as it shows important characteristics of his honored personality, such as having insight and emotions that Allah The Almighty had granted him. The uncle of the Prophet

was showering him with care, love and kindness as if he was his real father but nevertheless, when the Prophet

felt that he was capable of working to help his uncle, he began doing so. This shows the generosity, dutifulness and ability of the Prophet

lead a luxurious life and grant him wealth from his youth that would have saved him from the labor and effort involved in shepherding. However, divine wisdom teaches us that the best earning is that which is earned by labor and in return for the service that one does for his society and people.