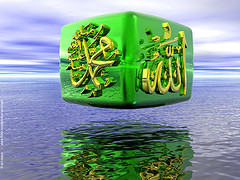 His meeting Baheera the monk

Abu Taalib set out on a journey to As-Shaam (greater Syria), and the Messenger of Allah

(who was still a boy) set out in his company with some men from the Quraysh. When they approached the monk, they dismounted and untied their baggage. The monk named Baheera, who would never come out to greet them or pay attention to them, in all their previous journeys, came out to meet them. However, this time, while they were untying their baggage, the monk walked among them until he came and took hold of the hand of the Messenger of Allah

and said, “This is the master of all the worlds. This is the Messenger of the Lord of the worlds whom Allah will send as a mercy to the worlds.” Some elders from the men of Quraysh asked him, “How do you know this?” He said, “When you approached ‘Aqabah, every tree and stone fell in prostration, and they only prostrate to a Prophet. I know him by the seal of Prophethood that lies underneath the gristle of his shoulder, like an apple [in shape].”

He returned and prepared food for them, and when he brought it to them the Prophet

was tending to the camels, so he asked them to bring him. As the Prophet

to the Romans, for if they knew him from his characteristics, they would surely kill him. When Baheera, may Allah be pleased with him, turned, he saw some people coming from the Roman territory. He received them and asked, “What has led you to come?” They replied, “We have come for the Prophet that would set out [from his town] during this month, and there is no way except that some people have been dispatched for it; when we were told about him, we were immediately sent to this path of yours.” He asked, “Tell me: If Allah has decreed a matter, could any person avert it?” They answered in the negative. The narrator of this incident then said that they gave him the pledge of allegiance and stayed with him and worshipped Allah. Then, Baheera, may Allah be pleased with him, said addressing the Quraysh, “I beseech you by Allah, who is his guardian?” They said, “Abu Taalib.” He continued beseeching Abu Taalib until he turn backed with him

.
Several matters can be learned from the story of Baheera, may Allah be pleased with him:
1.     The truthful among the monks of the people of the Book know that Muhammad

is the Messenger to all mankind, and they came to know this from his characteristics and the signs that they find in their own Books.
2.     It is well-established that trees and stones fell in prostration to the Prophet

that a cloud shaded him, and that the shade of a tree inclined towards him.
3.     The Prophet

benefited from his journeys and trips with his paternal uncle in the company of the elders of the men of Quraysh, where he became well-acquainted with the experiences of others, and made use of their views. They were experienced and aware, which was new to the Prophet

particularly at this early age.
4.     Baheera, may Allah be pleased with him, warned about the Christians and beseeched his paternal uncle and the elders of the men of Quraysh not to take him to the Romans, for if the Romans knew him by his characteristics, they would have killed him. The Romans were well aware of the fact that by the emergence of this Messenger, their colonial power in the region would vanish. Thus, he was the enemy who would undermine the interests of the Roman Empire, and restore them to their real people - and this was what the Romans feared.