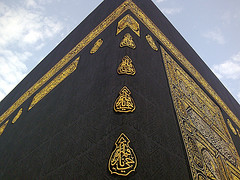 His participation in the re-building of the Ka’bah

was thirty-five years old, the Quraysh gathered to rebuild the Ka’bah as it had been destroyed by fire and a violent torrent. The Ka’bah had remained as made of layered bricks without clay in between them and with a height slightly exceeding that of human stature. Therefore, they wanted to demolish it in order to raise it anew and make a ceiling for it - but they were terrified at the prospect. Hence, Al-Waleed bin Al-Mugheerah suggested that they begin the demolition process, and thus took a pickaxe and supplicated to Allah The Almighty saying that they had not deviated and that they simply wanted to do something good.

He demolished the Ka’bah from the area of two of its corners and people waited that night to see what would happen to him. They decided that if he was punished by Allah The Almighty for his act, they would not demolish the Ka’bah and would restore it to its original state. Otherwise, it would be taken that Allah The Almighty was pleased with their act. Al-Waleed resumed his work demolishing the Ka’bah the following day supported by others using green bricks like humps that were connected to one another.
They divided the work in such a way that every tribe would have a share. Leaders and elderly men of the Quraysh participated in transferring and raising the stones. Both the Prophet

“[Take off and] put your waist sheet over your neck so that the stones would not hurt you.” But as soon as he had taken off his waist sheet, he fell unconscious to the ground with both his eyes towards the sky. When he returned to his senses, he said: “My waist sheet! My waist sheet!” Then he re-tied his waist sheet around his waist. [Al-Bukhari]
When they reached the place where the Black Stone was to be placed, a dispute arose. Every tribe wanted to raise it to its place. They were about to fight one another had it not been for the suggestion of Abu Umayyah bin Al-Mugheerah to seek the judgment of the first person who entered the mosque. When they agreed on the suggestion, Muhammad

was the first person to enter. When they saw him they exclaimed, “Here is Al-Ameen [the trustworthy]! We are satisfied.” When they told him about their case, the Prophet

asked for a garment, which they brought to him. The Prophet

took the stone and placed it in its position.
The Ka’bah then became eighteen Thiraa‘s (1512 cm), and its door was raised above the ground insomuch as a ladder was needed to ascend to it, so that the Ka’bah would be accessible to only those approved by the Quraysh. The door was also raised in such a way as to prevent water leakage into it. The ceiling rested upon six wooden pillars. Because the Quraysh ran short of lawful money, they could not complete the building upon the foundations of Ismaa‘eel (Ishmael), may Allah exalt his mention. Hence, they left Al-Hijr (an area of the original Ka’bah) outside the Ka’bah and built a short wall over Al-Hijr as an indication that it was part of the Ka’bah. They put a condition that the building should be financed only by lawful money with the exclusion of other money that had been obtained from adultery, Riba (usury, interest) or taken unfairly from people.
Lessons to be learned:
1-    The Ka’bah was built or rebuilt four times:
The first time was by Ibraaheem (Abraham), may Allah exalt his mention, with the help of his son Ismaa‘eel, may Allah exalt his mention.
The second time was by the Quraysh just before his commissioning as a prophet, and the Prophet

participated in the building process.
The third time was when it was set alight as a result of being hit by the catapult during the reign of Yazeed bin Mu’aawiyah due to the siege that was laid by Al-Husayn As-Sakooni around Ibn Az-Zubayr to surrender. It was later rebuilt by Ibn Az-Zubayr, may Allah be pleased with him.
The fourth time was during the reign of ‘Abdul-Malik bin Marwaan after Ibn Az-Zubayr, may Allah be pleased with him, was killed. The former restored the building to the state it was in at the time of the Prophet

for Ibn Az-Zubayr raised its height and added six Thiraa‘s (384 cm.) to its length and width that had not been previously added to it it. He also added ten Thiraa‘s (640 cm.) to its height and made two doors, one for entrance and the other for exit. He dared to apply this addition owing to the Hadeeth that was narrated by ‘Aa’ishah, may Allah be pleased with her, quoting the Prophet

as saying: “O ‘Aa’ishah, were your people not close to the pre-Islamic period of ignorance, I would have had the Ka’bah demolished and would have included in it the portion which had been left [at the last rebuilding], and would have made it level with the ground and would have made two doors for it, one towards the east and the other towards the west, and by doing this, it would have been rebuilt on the foundations that were laid by Ibraaheem, may Allah exalt his mention.” [Al-Bukhari]
2-    The way that was adopted by the Prophet

in ending the dispute was successful and fair. Everyone was satisfied with it, bloodshed was prevented and fierce wars were restrained. The judgment was fair because it was satisfactory to all the tribes, none of which were exclusively honored by placing the Black Stone in its place. This was the result of the guidance that Allah The Almighty conferred upon the Prophet

before the commencement of prophethood. It was a Divine decree that the Prophet

happened to enter the Sacred Mosque from As-Safa door at that time to resolve this difficult crisis. It was thus psychologically dealt with before it had been managed in reality. All the tribes complied with any decision that was satisfactory to Muhammad

as he was the honest one who would neither wrong anyone, nor favor anyone at the expense of another, nor make corruption. He was in the best position to be entrusted with making a decision pertaining to the House and people’s souls and blood.
3-    The incident of rebuilding the Ka’bah revealed the moral status of the Prophet

in the Qurayshi view. The Prophet

gained two honors in this incident: the honor of settling the dispute and stopping fighting among the tribes of the Quraysh, and the honor that was contested for by the tribes but which Allah The Almighty saved for the Prophet

which was the placement of the Black Stone with his noble hands. He picked the stone from the garment and put it in the correct position in the House.
4-    The Muslim derives from the rebuilding incident the perfection of Divine protection and success as manifested in the biography of the Prophet

. Also, he notes that Allah The Almighty honored the Prophet