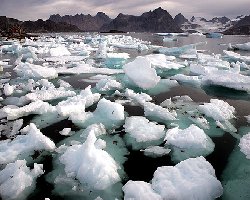 Anas Ibn Malik, may Allah be pleased with him, said: "Whilst we were in the Mosque with the Messenger of Allah

(may Allah exalt his mention) a Bedouin came and stood urinating in the Mosque. The Companions of the Messenger of Allah

said, 'Stop it! Stop it!' and were about to attack him. But the Messenger of Allah

said, 'Do not interrupt him; leave him alone.' So they left him until he had finished urinating, then the Messenger of Allah

called him and said to him, 'In these Mosques it is not right to do anything like urinating or defecating; they are only for remembering Allah, praying and reading Qur'aan,' or words to that effect. Then he commanded a man who was there to bring a bucket of water and throw it over the (urine), and he did so." [Muslim]

The principle which the Prophet

followed in dealing with this mistake was to treat the man gently, not to be harsh with him.
The Prophet

was thinking of the likely consequences of the two options - stopping him or leaving him alone. If they tried to stop him, forcing a man to suppress his urination could do him harm, and if he was unable to stop but moved away because he was afraid of them, the impurity would be spread over a wider area of the Mosque and on the man's body and clothing. The Prophet

had the farsightedness to see that leaving the man alone until he had finished urinating was the lesser of two evils, especially since the man had already started doing it, and it was a problem that they would be able to do something about by cleaning it afterwards. So he told his companions to leave him alone and not to interrupt him.
Ibn Hajar, may Allah be pleased with him, mentioned in his commentary a number of things we learn from the hadith about the Bedouin, among which are the following:
- We should be gentle when dealing with one who is ignorant and teach him what he needs to know without rebuking him, so long as he is not acting out of stubbornness, especially if he is one who needs to be won over.
- The Prophet

was kind and he dealt nicely with him.
- The idea of taking precautions against impurity was established well in the minds of the Sahabah (Prophet's companions), which is why they hastened to denounce it in the presence of the Prophet

without first asking his permission. The idea of enjoining what is good and forbidding what is evil was also well established in their minds.
- We should also hasten to remove anything objectionable when there is nothing to stop us from doing so, because when the man had finished urinating, the Prophet

issued instructions that the place should be cleaned with water.
Explaining the seriousness of the mistakeIbn 'Umar, Muhammad Ibn Ka'b, Zayd Ibn Aslam and Qutadah, may Allah be pleased with them, reported (the following is compiled from their reports) that during the campaign of Tabook, a man said, "We have never seen anyone who loves food and tells lies more than our rectors, or anyone who is more cowardly in the battlefield" - referring to the Messenger of Allah

and his Companions.
Awf Ibn Malik said, 'You are lying! You are a hypocrite, and I am going to tell the Messenger of Allah

. ' Awf went to the Messenger of Allah

to tell him, but found that Qur'aan had already been revealed concerning it. That man came to the Prophet

who was riding his camel, and said, "O Messenger of Allah

didn’t become enraged or order that the man should be punished severely. Any one else may do that, but the Prophet was sent as a mercy to all creation and to be an example of how people should behave.