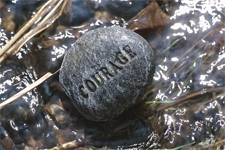 The Courage of the Prophet – I

Undoubtedly the clearest manifestation of courage is to be patient on the battlefield where one should retain his composure over all motives of fear, so as not to be cowardly in situations where bravery is required and praised, and where cowardice is considered shameful and evil. From the examples of the courage of the Prophet,

, one finds that he is the best role model and example to be followed. He strove in the cause of Allah with his heart, tongue, sword, spear, Da‘wah (call) and eloquence. He dispatched fifty-six battalions, led in twenty-seven battles, and participated in the fighting in nine of them. The following are examples of his courage:

The First Example:The courage of the Prophet,

, in the Battle of Badr Al-Kubra
An incident that showed the wisdom of the Prophet,

, in this battle was that he consulted the people before the battle began. The Prophet,

, wanted to know to what extent the Ansaar wanted to fight. In the pledge of allegiance of ‘Aqabah, they had agreed to protect him in Madeenah with all that they protect their own selves, property, offspring and women from. However, they gave him no such promise if this were to be outside Madeenah. Hence, the Prophet,

, then consulted the people for a third time, and the Ansaar realized that he meant them. Thus, Sa’d ibn Mu’aath, may Allah be pleased with him, hastened to say, “O Messenger of Allah! You seem to mean us.” The Prophet,

, did actually mean them because they gave him the pledge of allegiance to protect him from (anyone regardless of who he is) red or black, but within their homeland. Hence, when he decided to fight the disbelievers outside Madeenah, he consulted them to know their opinion. Sa’d, may Allah be pleased with him, said,
Perhaps you are afraid that the Ansaar might see that it is not binding upon them to support you outside the borders of their territory, so let me speak on behalf of the Ansaar. Set out wherever you like, keep relations with whomever you like, sever relations with whomever you like, take from our property whatever you like, give us whatever you like, and be sure that what you take from us is dearer to us than what you will leave.
Whatever command you give us, we will follow you. By Allah! If you were to take us to Bark Al-Ghimdaan, we will proceed with you. By Him who sent you with the truth, if you proceed with us to that sea and plunge into it, we will plunge into it with you, with none of us remaining behind. We would not dislike it if you lead us to meet our enemy tomorrow, for indeed we are patient in war and trustworthy in combat. Perhaps Allah The Almighty will show you from us that which is pleasing to you. So, proceed with us by the Blessing of Allah.”
On that the Messenger of Allah,

smiled, and was pleased with what he had heard from them, which increased his enthusiasm. He then said: “Proceed and receive the glad tidings: Allah The Almighty has promised me one of both groups, and it is as if I am seeing now the places where those people [the polytheists] will die.”
His reliance on his Lord The Exalted was one of his great factors in the Battle of Badr, for he was confident that success does not come by the large number of fighters, nor due to the mighty artillery; rather, victory is achieved by virtue of the help and support of Allah The Almighty, along with utilizing the available means and reliance on Him.
In a Hadeeth on the authority of ‘Umar ibn Al-Khattaab, may Allah be pleased with him, he said,
When it was the Day of Badr, the Messenger of Allah

, looked at the polytheists and they were one thousand while his own Companions were three hundred and nineteen. Thus, the Prophet,

, stood facing the Qiblah, stretched his hands and began his supplication to his Lord, saying: “O Allah! Fulfill Your promise to me. O Allah! If this small group [of Muslims] is destroyed, You will not be Worshipped on the earth.” He continued his supplication to his Lord, stretching his hands and facing the Qiblah, until his upper garment slipped down from his shoulders. Abu Bakr, may Allah be pleased with him, came to him, picked up his upper garment and replaced it on his shoulders. Then, he embraced him from behind and said, “O Messenger of Allah! Stop supplicating to your Lord now for He will fulfill His promise to you.”
It was on this occasion that Allah The Exalted revealed the verse (what means): {[Remember] when you asked help of your Lord, and He answered you, “Indeed, I will reinforce you with a thousand from the angels, following one another.}[Quran 8:9] Allah The Almighty reinforced him with the angels. [Al-Bukhari and Muslim]
The Messenger of Allah

emerged from the shade while reciting the verse (what means): {[Their] assembly will be defeated, and they will turn their backs [in retreat]} [Quran 54:45] and then took part in that battle, and he was the most powerful, the strongest and the bravest of all people in it. Abu Bakr, may Allah be pleased with him, was by his side, and as they were both in the shade, striving through supplication, they came to the battlefield, encouraging the people to fight and also taking part in the fight, to combine the two dignified positions.
The Messenger of Allah

was the bravest of all people. In a Hadeeth on the authority of ‘Ali, may Allah be pleased with him, he said,“I saw us on the Day of Badr taking shelter with the Messenger of Allah

who was the nearest of us all to the enemy. On that day, he was the mightiest of all people.” [Ahmad and Al-Haakim, Al-Haakim and Ath-Thahabi - Saheeh]
In another Hadeeth on the authority of ‘Ali, may Allah be pleased with him, he said: “Whenever the fighting became fierce and both parties met, we would seek protection in the Messenger of Allah

and find that none of us would be nearer to the people [enemy] than him.”[Al-Haakim, Al-Haakim and Ath-Thahabi - Saheeh]

The Courage of the Prophet – II