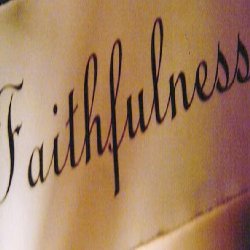 The Faithfulness of the Prophet

Faithfulness was one of the noble characteristics and good morals of the Prophet,

, in that he never violated a covenant, denied anyone their due, broke a promise or betrayed anyone. He fulfilled the command of Allah The Almighty in the Quranic verse (which means): {And do not approach the orphan's property except in a way that is best until he reaches maturity. And give full measure and weight in justice. We do not charge any soul except [with that is within] its capacity. And when you testify, be just, even if [it concerns] a near relative. And the covenant of Allah fulfill. This has He instructed you that you may remember}[Quran 6:152]

Such virtues were evident in the relationships of the Prophet,

, was faithful and honest. He worshiped his Lord, obeyed him in the best way, and conveyed the message of Allah The Exalted with the utmost faithfulness and honesty. He explained and clarified to people the Straight Path and conveyed the upright religion of Allah The Almighty, exactly as it was revealed to him by Allah and as perfectly as he was ordered to. Allah The Almighty Says (what means): {And We revealed to you the message that you may make clear to the people what was sent down to them and that they might give thought.} [Quran 16:44]
In his relationship with his wives, the Prophet,

, was extremely faithful. He was ever grateful to Khadeejah, may Allah be pleased with her, for the great favors she did for him, for her generous spending and her numerous sacrifices. He always praised her wisdom. He did not marry any other women when she was still alive. Even after she died, he would speak in favor of her and show kindness to her relatives and friends. He was faithful and grateful to her, may Allah be pleased with her.
The Prophet,

, was also faithful to his relatives. He was always thankful to his uncle, Abu Taalib, who had brought him up and taken care of him since he was eight years old. Therefore, the Prophet,

, strove hard to convince his uncle to embrace Islam before he died. After his uncle passed away the Prophet,

, persisted in asking Allah The Almighty to forgive him until Allah forbade him from doing this.
The Prophet,

, was faithful to his Companions. An example of this was his attitude towards Haatib ibn Abi Balta‘ah, may Allah be pleased with him, when he revealed the secret of the Prophet,

, and his Companions in one of their most critical situations. He had written a message to Quraysh to tell them about the march of the Prophet,

, and his army to attack them, but the Prophet,

, forgave him because he had fought in Badr. The Prophet,

, said:“He attended the Battle of Badr, perhaps Allah The Almighty looked at those who witnessed Badr and said: ‘O people of Badr [i.e. the Muslim soldiers who had fought there], do as you please, for I have forgiven you.’” [Al-Bukhari and Muslim]
The Prophet,

, was honest and gracious with his enemies. This virtue was manifest while concluding with Quraysh the treaty of Al-Hudaybiyah, to which the Prophet was perfectly committed. Anas, may Allah be pleased with him, narrated that Quraysh decided to conclude a peace treaty with the Prophet,

. When writing down the terms of the treaty, the Prophet,

, said to ‘Ali, may Allah be pleased with him:“Write ‘ Bismillaah Ar-Rahman ٍِAr-Raheem [i.e., ‘In the Name of Allah, the Most Gracious, the Most Merciful.’]” Suhayl, who was from the Quraysh, remarked that they did not know what this term (i.e., The Most Gracious, The most Merciful) meant, and demanded that he write the term “Bi-ismika Allahumma (i.e., In Your Name, O Allah)” which was one that they understood. The Prophet

agreed to this. Then the Prophet,

, instead write his name and his father’s name.The Prophet,

, replied affirmatively, saying that they did not want anyone who would choose to leave them; if people from the  Quraysh wanted to join the Muslims, the Prophet,

, said that Allah would make a way for them to do so. The Prophet,

, later returned Abu Baseer to the Quraysh, although he had come to Madeenah as a Muslim, because the Prophet,

, would not breach the treaty he had signed.
It was reported on the authority of Huthayfah ibn Al-Yammaan, may Allah be pleased with him, that he said that nothing had prevented him from being present at the Battle of Badr except that he had gone out with his father Husayl to participate in the battle but they were caught by the disbelievers of Quraysh who asked Huthayfah and his father if they had intended to join Muhammad,

. They replied that they had only wanted to go to Madeenah, so the disbelievers made them take an oath by Allah that when they went to Madeenah they would not fight on the side of Muhammad,

. Huthayfah added that they went to meet the Messenger of Allah,

, and related the incident to him. He asked both of them to leave, saying that he would honor the treaty and seek the help of Allah against the disbelievers.  [Muslim]
The Prophet,

, counted breaking promises and breaching covenants to be among signs of hypocrisy; he said: “There are three signs of a hypocrite: when he speaks he tells lies, when he makes a promise he breaks it, and when he is trusted he betrays.” [Al-Bukhari and Muslim]
The faithfulness of the Prophet,

, was indeed a great virtue, and it was manifest in numerous forms and situations. Every category of people had their share of his faithfulness.

Dear Muslim, have you had a share of this Prophetic virtue? Have you learnt how you should be faithful?