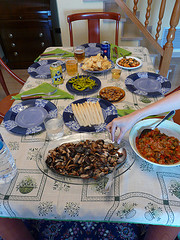 The Prophet’s Guidance in Eating and Drinking

Food is an immense Divine blessing that Allah The Almighty drew man's attention to in many Quranic verses so we can contemplate it, understand its value and consequently thank the continual Provider and Generous, Allah The Almighty, Who Says (what means): {Then let mankind look at his food - How We poured down water in torrents, Then We broke open the earth, splitting [it with sprouts], And caused to grow within it grain, And grapes and herbage, And olive and palm trees, And gardens of dense shrubbery, And fruit and grass [As] enjoyment for you and your grazing livestock.} [Quran 80: 24-32]

Since food and drink have such a great impact on man's life, prophetic guidance came with instructions for Muslims telling them how to follow certain etiquettes in eating and drinking. There is an inspiring prophetic basis clarifying this guidance that the Prophet,

, stated in a Hadeeth, saying: “There is no container that the son of Aadam fills [which is] worse than his stomach. A few morsels that keep his back upright are sufficient for him. If he has to [eat more than that], then he should keep one-third for food, one-third for drink and one-third for his breathing.” [Ahmad and At-Tirmithi] This Hadeeth clarifies that the amount of food and the various ways of preparing it are not what is vital - rather, the Prophet,

, told us that the worst container to fill is one’s stomach. Therefore, it is important to shed light on some of the guidance of the Prophet,

, concerning eating and drinking.
Washing hands before and after eating is another part of his guidance. Abu Daawood

, said: “If anyone spends the night with grease on his hand which he has not washed off, he can blame only himself if some trouble comes to him.”
While eating, the Prophet,

, would kneel. Another way of sitting was that he would raise his right leg and sit on the left one. Muslim

narrated that Anas, may Allah be pleased with him, said, “I saw the Prophet

sitting on his heels eating dates.” The Prophet,

, did not eat while he was reclining. Al-Bukhari

, said: “I do not eat [while I am] reclining.” That it is to say reclining with a mattress under him. In addition, he did not eat while he was lying on his stomach and face. He forbade doing so as Ibn Maajah

narrated.
Mentioning the Name of Allah The Almighty at the beginning of eating and praising Him after finishing are also parts of the guidance of the Prophet,

. It is narrated on the authority of ‘Aa’ishah, may Allah be pleased with her, that the Prophet,

used to say after eating: ‘Al-hamdulillahi –lathi at‘amana wa saqaana wa ja‘alana muslimeen [All praise is due to Allah Who fed us, watered us, and made us Muslims].’”
Eating with one’s right hand and from the closest part of the dish are more aspects of the guidance of the Prophet,

and he said: “Mention the Name of Allah [at the beginning of having food], eat with your right hand, and eat from what is close to you.””[Al-Bukhari and Muslim]
It is also part of his guidance,

, to eat with three fingers and lick them after finishing. Ka‘b ibn Maalik, may Allah be pleased with him, said, "I saw the Prophet

eat with three fingers. When he finished eating, he licked them.” [Muslim]
His guidance,

, with regard to drinking, is to drink with one’s right hand as was mentioned before concerning eating. He would drink water in three swigs. Anas ibn Maalik, may Allah be pleased with him, said, “Whenever the Prophet

drank, he used to breathe thrice [in between].” [Al-Bukhari and Muslim] In another narration he said: “The Messenger of Allah

breathed three times [outside the vessel] in the course of a drink, and said:“It is more thirst- quenching, healthier and more wholesome.””
Accordingly, his guidance with regard to drinking water was to drink it in three times breathing between each one while keeping the glass away from his mouth and breathe in order to protect it from any impurity. He forbade blowing into a vessel. Al-Bukhari

and he drank while he was standing." [Al-Bukhari and Muslim] Reconciling the meaning of the Hadeeths which prohibit and the others which permit, scholars state that prohibition is interpreted to be an act of Karaahah Tanzeeh (mild undesirability) and his drinking while he was standing indicated permissibility.
Another of the perfect acts that he,

, guided us to regarding eating is that he never rejected food or asked for food that was not available at home. If any lawful food was brought to him, he would eat it unless he did not desire it, in which case he would leave it without prohibiting it. Abu Hurayrah, may Allah be pleased with him, said, “The Prophet

never criticized any kind of food. If he desired it, he would eat it, if not, he would leave it.” [Al-Bukhari and Muslim]
The Prophet,

, would supplicate to Allah The Almighty for the person who invites people to eat, saying: “Aftara ‘indakum as-saa’imoon wa akala ta‘aamakum al-abraar wa sallat ‘alaykum al-malaa’ikah [May the fasting (persons) break their fast at your place, and the pious eat your food, and the angels pray for you.]” [Abu Daawood]
It is vital that we take care of our physical health through applying the guidance of the Prophet,

, in how we eat and drink. His guidance,