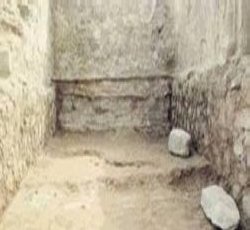 The Houses of the Prophet that Were Attached to the Mosque

Chambers were built for the Messenger of Allah

around his noble Mosque to be dwelling places for him and his wives. These chambers were by no means as graceful and luxurious as the palaces of kings, Khosraus and Ceasars; on the contrary, they were the houses of a man who refrained from this world with its adornments and rather, sought the abiding bliss of the Hereafter. Like his mosque, they were built from unfurnaced bricks and clay, in addition to some stones, and their roofs were made of date-palm leaf stalks. They had narrow courtyards and their ceilings were very low so that they could be touched by a tall boy. According to Al-Hasan Al-Basri

who would go there as boy in the company of his mother Khayrah, the freedwoman of Umm Salamah, may Allah be pleased with her, he said, “I was able to touch with my hands the first part of the roof of the chambers of the Prophet

Thus, the houses of the Prophet

were very simple, whereas Madeenah was famous for its high forts, taken by the elite among the people, in order to show pride at the time of peace and be fortified at the time of war. Having been very proud of them, they would give names to them like the fort of Muzaahim, which belonged to Abdullaah bin Ubayy bin Salool, and the fort of Faari‘ that belonged to Hassaan bin Thaabit, may Allah be pleased with him.
However, the Prophet

built his dwelling places in this simple and modest form, even though he had the power to build tall palaces for himself. Had he made only a single reference to that desire, surely, the Ansaar (helpers) would have hastened to build them for him. He also had the power to construct them from the public property of the state that came from Fay’ (booty gained with no fight or war and was assigned to the Messenger of Allah

) or the like of it. However, he did not do so in order to set forth to his nation a high parable for humbleness, abstinence from the delights and pleasures of this world and the concentration of endeavor and determination on work in preparation for the time to come after death.