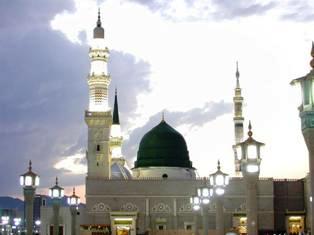 The system of establishing the relation of brotherhood took part in connecting the Ummah (Muslim nation) together. The Messenger of Allah

established this relation on the basis of full brotherhood. Such brotherhood melted the bigotries of Jaahiliyyah (pre-Islamic ignorance). There was no more zealotry except for Islam. All types of discrimination that had been based on lineage, color and nationalism were discarded; no one was granted higher esteem or degraded, except according to his morals and piety.

made brotherhood an enforceable agreement, not mere words. It was a deed that was connected to lives and property, not just slogans to be raised without any effect.
The emotions of altruism and consolation were mixed in this brotherhood and set the greatest examples in this new society.
The reason behind strengthening the brotherhood between the Muhaajiroon (emigrants) and Ansaar (helpers) was that the people of that society gathered around the religion of Allah The Almighty; their religion taught them to practice what they preached and to say, do, believe and act all at the same time. They were far from empty slogans. They were as Allah The Almighty described them in the Quran when He Says (what means): {The only statement of the [true] believers when they are called to Allah and His Messenger to judge between them is that they say, “We hear and we obey.” And those are the successful.} [Quran 24:51]
This practice was followed by Muslims, and it sustained their brotherhood through which Allah The Almighty strengthened this religion and His Prophet until the Da‘wah (call) gave its fruits throughout all its stages during the lifetime of the Prophet

. The effect of brotherhood extended until his death. It also remained when the Companions gave their pledge to Abu Bakr, may Allah be pleased with him, so that the Ansaar did not try to break down the unity of the Ummah by demanding to seize authority as a response to their desire for authority and love for domination. The policy of establishing the relation of brotherhood between the Muhaajiroon and the Ansaar was a type of political antecedence that was adopted by the Messenger of Allah

to enhance amiability and instill them into the hearts and minds of the Muhaajiroon and Ansaar who collectively exerted great effort to maintain this amiability and brotherhood. Moreover, they hastened to implement the terms of brotherhood.
No matter how much writers and researchers eloquently try to describe the efforts of the Ansaar, they could never find better than what Allah The Almighty Says about them when He Says (what means): {And [also for] those who were settled in Madeenah and [adopted] the faith before them. They love those who emigrated to them and find not any want in their breasts of what the emigrants were given but give [them] preference over themselves, even though they are in privation. And whoever is protected from the stinginess of his soul - it is those who will be the successful.} [Quran 59:9]
Some of the names of the Muhaajiroon and Ansaar who became brothers for the sake of Allah The Almighty
Abu Bakr As-Sideeq and Khaarijah bin Zuhayr; ‘Umar bin Al-Khattaab and ‘Atbaan bin Maalik; Abu ‘Ubaydah bin Al-Jarraah and Sa‘d bin Mu‘aath; ‘Abdur-Rahmaan bin ‘Awf and Sa‘d bin Ar-Rabee‘; Az-Zubayr bin Al‘Awwaam and Salaamah bin Salaamah bin Waqsh; Talhah bin ‘Ubaydillaah and Ka‘b bin Maalik; Sa‘eed bin Zayd and Ubayy bin Ka‘b; Mus‘ab bin ‘Umayr and Abu Ayyoob Khaalid bin Zayd; Abu Huthayfah bin ‘Utbah bin Rabee‘ah and ‘Abbaad bin Bishr bin Waqsh; ‘Ammaar bin Yaasir and Huthayfah bin Al-Yamaan; Abu Tharr Al-Ghiffaari and Al-Munthir bin ‘Amr; Haatib bin Abi Balta‘ah and ‘Uwaym bin Saa‘idah; Salmaan Al-Faarisi and Abu Ad-Dardaa’ and Bilaal, the Mu’ath’thin of the Prophet

and Abu Ruwayhah ‘Abdullaah bin ‘Abdur-Rahmaan Al-Khath‘ami, may Allah be pleased with them.